Dengue death toll has now reached 18 and the latest patient to die on Thursday was a six-year-old girl from the town of Candijay.

On the same day, July 17, three more children had also been admitted for dengue at the Gov. Celestino Gallares Memorial Hospital in Tagbilaran City.

At the start of July, the number of dengue cases in Bohol already reached 1,535 which included 17 deaths.

Now, it’s nearing 1,550 as the Regional Epidemiology and Surveillance Unit (RESU)-7 is yet to issue an update on the official record this week.

The surge of dengue cases alerted municipal officials of Lila after noting random cases of dengue in barangay Calvario, although the entire town is not included in the top 12 towns with a high record of dengue cases.

The municipal government proceeded with the misting operation to drive away mosquitoes that might be bringing the dengue virus.

Every day, the mayor’s office also sends the municipality’s medical technologist to barangay Calvario to conduct NS1 screening on children and adults who have fever to make sure those positive of dengue can be promptly admitted to hospitals.

Since Monday last week, there had been no dengue positive resident in the area.

The municipality also distributed treated mosquito nets to schools so that children are protected from mosquito bites while in school.

Also, a swimming pool in the municipality is a concern of the officials of Lila as it has portions considered breeding grounds of mosquitoes.

The municipal government of Lila earlier scheduled a clean-up of the swimming pool, but the heavy rains prevented it.

The mayor’s office also sent a team from the municipal engineer’s office to check on the repair works on the canals and if the area is accessible by a backhoe.

Lila Mayor Jed Piollo shared this in a public statement he issued, making it known that his town is taking action on the surge of dengue.

He clarified that while he intends to work silently, he felt the need to appease the people as to the concern on the surging dengue cases.

In fact, on the first day of his assumption to office, he immediately tapped all the concerned offices in the municipality and coordinated with agencies under the provincial government and provincial offices of national agencies to seek assistance in handling the problem.

Piollo said he immediately convened the local health board of the municipality to be able to consult health experts in the formulation of measures.

The mayor instructed the rural health unit to conduct an information, education and communication campaign in the barangays and schools.

Samples of mosquito larvae from different areas in the barangays were also collected to trace the source of dengue-carrying mosquitoes.

Piollo also said that he personally inspected the areas, together with the municipal sanitary inspector, RHU and DOH nurses, and other local officials. 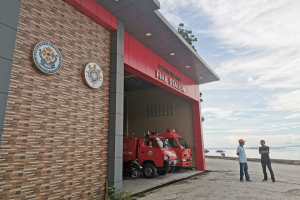