Local authorities remained clueless on the whereabouts of Boholano seaman Rogelio “Ondoy” Balahay, Jr. who has been reported missing mid-sea while on board a bulk carrier, but efforts have been mounted by the government to locate him particularly in Singapore where his ship was bound when he went missing, said a Capitol official Friday.

According to Rene Real of the provincial government’s OFW (overseas Filipino worker) desk, Balahay’s case summary has been submitted to the Philippine Embassy in Singapore for investigation.

However, Real noted that the vessel, Alpha Bravery which departed from Brazil on August 26, will stop in Africa before proceeding to Singapore.

Alpha Bravery which flies the Greek flag is expected to arrive in Singapore on October 1, based on data from Marine Traffic.

On September 1, Balahay’s family was reportedly informed by Friendly Maritime Services, Inc. that he has gone missing mid-sea.

He reportedly last spoke to his family on August 31 saying that something “bad” might happen to him after he drew the ire of some of his Filipino shipmates.

Balahay, 31, is a native of Alicia, Bohol. He is set to be married to his girlfriend in January next year.

According to Real, he has also submitted a letter to the Office of the President seeking assistance and a 25-page document on the case.

Meanwhile, Balahay’s family flew to Manila to seek for an audience with President Duterte and coordinate with the employment agency. (ad) 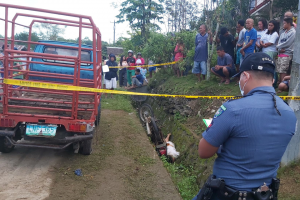