A public elementary school teacher deemed a high-value target in the police’s anti-drug campaign and two of his alleged cohorts in the drug trade, a casual employee of the Loay local government unit and a nurse, were arrested by police for drug charges.

He was apprehended along with Charisma Cesar, 37, a registered nurse from Tagbilaran City and Ralph Lumain, 30, a casual employee of the Loay local government unit, who were both allegedly caught in possession of shabu.

According to Conarco, they received reports indicating that Lapinig was selling shabu to some of his former students prompting them to place the elementary teacher under surveillance.

Lapinig was monitored by police since late last year to verify his alleged involvement in the drug trade.

“Lisod og mo buy-bust ta unya wa siyay possession na item,” said Conarco, adding that they gathered information indicating that Lapinig was in possession of shabu prior to the operation.

Meanwhile, Loay police officers led by Conarco and backed up by operatives from the Bohol police’s Drug Enforcement Unit (3rd District) seized shabu worth P34,000 from the three suspects.

Police also took custody of Lapinig’s Honda Fit which was found at the buy-bust area.

Conarco said that Lumain previously surrendered under Oplan Tokhang and that he had personally asked the self-confessed drug personality to end his involvement in the narcotics trade. However, police received reports indicating that Lumain continued to peddle illegal drugs, he added.

All three suspects were detained at the Loay Police Station pending the filing of charges against them.

Conarco said that they were interrogating Lapinig and his two cohorts to identify their drug source.

Lapinig is set to be charged with sale and possession of illegal drugs while Lumain and Cesar will be facing possession charges. (W. Maestrado) 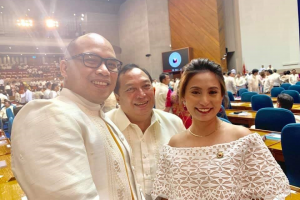