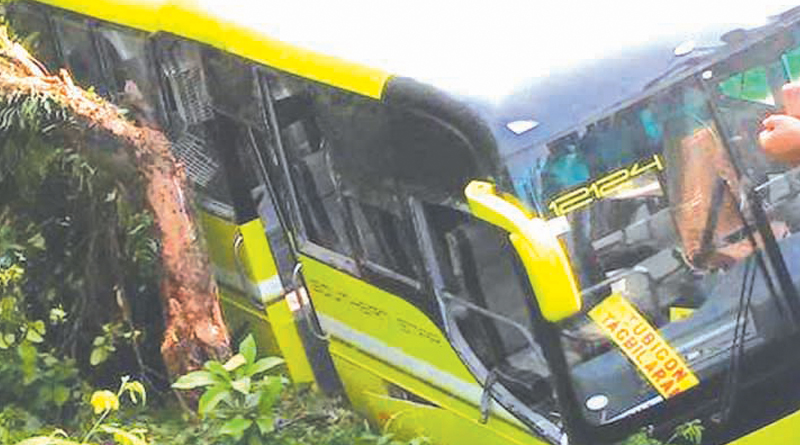 The deadly mix of drugs and alcohol to combat driver fatigue was linked to the alarming upward trend of bus accidents that have claimed the lives of innocent victims, now considered a growing menace confronting the riding public where erring bus drivers of a major bus company are perceived by the riding public to be driving under the influence of illegal drugs and alcohol.

Southern Bus Transit, Inc., currently the largest public land transportation company in Bohol acknowledged the tragic impact of drug impaired driving and the persistent problem of speed maniacs during a meeting of the Sangguniang Panlalawigan (SP) Committee Meeting of the Whole on October 9, 2015 at the SP Conference Room.

Noel Fuentes, Branch Manager of Southern Star also revealed that 85% of bus accidents were caused by human errors due to poor judgment on the part of their drivers while the remaining 15% was traced to mechanical malfunctions.

One glaring factor that greatly encourage Southern Star buses to race against each other or what they call “yellow vs yellow race” with reference to the yellow colors of their buses was the commission based remuneration paid to their drivers depending on the number of passengers and cargo they can load on their respective units.

The bus company requires their drivers a maximum daily 300 kilometers driving time and strict compliance of the 70 kph speed limit on all their buses but could not enforce the no overloading rule in deference to the need for the drivers to increase their daily commissions.

Southern Star started operations in Bohol in 2012 and is now plying almost all the major routes of the province with 116 buses of which 90 are brand new and 26 have been on the road for less than 5 years.

These disturbing revelations surfaced after Board Member Abeleon Damalerio ticked off six road accidents at the start of the meeting involving Southern Star buses with 4 incidents recorded in the month of January, 2015 alone.

Two recent accidents, one in Maca-as, Tubigon and the most recent occurring in Catagba-can, Loon in a span of three days prompted Damalerio to deliver a privilege speech expressing deep concern on “issue on past and recent incidents involving the Southern Star Bus Company operating in Bohol resulting to damage to properties and injuries to the riding public”.

Upon questioning by Arcamo and Cepedoza, Fuentes admitted that “there were bus drivers who tested positive for illegal drugs during our random drug test conducted twice a year and some failed alcohol sobriety tests before they board their buses Â including medical tests but we admit that we need to conduct more drug tests to insure that our drivers are fit to convey our passengers safely”, Fuentes told the SP in the vernacular.

But Board Members Venzencio Arcamo and Romulo Cepedoza were not satisfied by the assurance of drug and alcohol tests by Southern Star management and pressed for increase tests to assure the safety of the riding public.

Arcamo reminded officials of Southern Star about the pernicious consequences of drugged driving “that your twice a year random drug testing on your drivers leaves much to be desired since it could not cover occasional, regular, recreational users or persons that need a daily fix”.

Cepedoza also confronted officials of Southern Star that bus drivers intimated to him that “we use drugs to ward off fatigue coming from our efforts to achieve the company’s policy of completing 300 kilometers maximum daily driving time”.

Board Member Cesar Tomas “Yul” Lopez elicited from Fuentes information that the bus company is implementing a Â maximum 300 kilometers daily driving time for their drivers broken down into three one way trips a day.

But Fuentes downplayed these reports saying “we are giving our drivers one day off every week and those who depart early in the morning are made to take an 8 hour break”.

But Cepedoza countered saying “let’s me honest here. It is more than 300 kilometers a day that you require your drivers to complete. Investigations show that speed and fatigue, a lethal combination are major factors in road accidents”.

Cepedoza further said that according to his sources, the use of illegal drugs was prevalent to combat driver fatigue

According to an unofficial report read by Damalerio, overspeeding, drivers reportedly losing control, mechanical failure and poor driver judgement caused the death of two persons and physical injuries to more than fifteen passengers.

Fuentes responded that “we have a company policy for our drivers to strictly observe the 70 kph speed limit. We also impose a time frame for our buses to negotiate the distance between two destinations to avoid over speeding”.

Fuentes responded that passenger overloading is beyond their control since their inspectors look the other way considering the commission derived from the extra passengers.

“Which is first – safety or profit or profit or safety”, Board Member Tomas Abapo addressed Southern Star officials restating the mantra of public transportation that “you should serve the public with safety first, profit later and exercise diligence of a good father of a family”.

Marylou Macua, one of the victims of the six victims of the latest road accident involving Southern Star appeared before the SP and narrated her harrowing experience while on board the speeding bus bound for Tubigon from Tagbilaran.

Macua told the SP that she was sitting on the front row and noticed the unusual behaviour of the bus driver while negotiating the highway in Catagbacan Norte, Loon at high speed, lost control Â and rammed into a tree.

The bus company shouldered all her hospitalization expenses and promised to reimburse her lost earnings while recuperating from her injuries.

Southern Star Bus Transit Inc, is a bus line under Ceres Liner and part of Vallacar Transit Inc. and owned by the Yanson Group of Companies.

At the heart of the problem is the growing risks to the public of unfit bus drivers that not only involve simple “human errors” as Southern Star Bus Company officials acknowledge but the unseen use of drugs that is slowly gnawing within the innards of the company. (Chito Visarra)