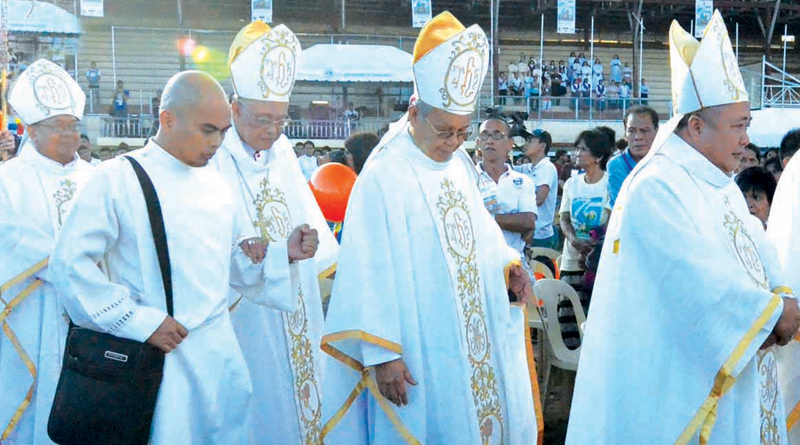 In joyful anticipation of its 75thÂ year, the Diocese of Tagbilaran celebrates its Diamond Jubilee Year starting yesterday and to climax on the exact anniversary date on November 8, 2016.

It may be recalled that the Diocese of Tagbilaran was canonically erected as a Diocese by Pope Pius XII on November 8, 1941 by virtue of a Papal Bull,Â In sublimi Petri cathedra, by Pope Pius XII.

The Diamond Jubilee launch yesterday was highlighted with the Eucharistic celebration in the afternoon at the CPG Sports Complex with Bishop Leonardo Y. Medroso as mass presider, concelebrated by four other Boholano bishops namely:Â BishopÂ of Military Ordinariate of the Philippines, Most Rev.Â LeopoldoÂ S.Â Tumulak, D.D., Sorsogon Bishop Arturo Bastes, SVD.; Butuan Bishop Juan deÂ dios Pueblos; and Surigao Bishop Antonieto Cabahug; and with the rest of the diocesan clergy. The Holy Mass was beamed worldwide via live coverage of radio station dyRD-AM, member station of the Catholic Media Network (CMN), through its worldwide streaming atwww.dyrdam.com

Prior to the holy mass, pilgrims coming from the different parishes in the diocese participated in the procession of the Pilgrim Image of St. Joseph from the Cathedral premises to the CPG Sports Complex.

Earlier in the morning, penitential rites and confession were done at the Cathedral premises preceded by the Invocation of the Holy Spirit as part of the preparatory rites for the opening of the Jubilee Door with the St. Joseph Cathedral as a pilgrim church, where the faithful can obtain the gift of Sacred Indulgences by way of pilgrimage and devout participation in sacred rites.

At the start of the Holy Mass, the Apostolic Penitentiary from the Holy See was read by Msgr. Jesus Ligason in Latin and Rev. Fr. Agerio Pana in English.

The Diamond Jubilee launch was capped with a meaningful lighting of the Jubilee Flame, succeeded by a fireworks display before the departure of the Pilgrim Image of St. Joseph to the town of Baclayon, where it will stay for one week. The image will be visiting the various parishes of the diocese until it returns to the St. Joseph Cathedral in time for the diamond jubilee celebration in November next year.

An exhibit showcasing the 75 years journey of the Diocese of Tagbilaran was also opened yesterday at 2ndÂ floor of the St. Joseph Cathedral. It is open for public viewing during Â the whole year.

Bohol used to be under the ecclesiastical jurisdiction of the Diocese of Cebu until 1941. With the outbreak of World War II, the new diocese did not immediately have a resident bishop and continued under the apostolic administration of the then archbishop of Cebu.

On June 29, 1946, Most Rev. Julio R. Rosales, D.D. was named the First Bishop of Tagbilaran, taking Canonical possession of the Diocese on September 25, 1946. Most Rev. Julio R. Rosales left in Bohol a most precious legacy, the Immaculate Heart of Mary Seminary (IHMS) which has made the province produce many priests and bishops. In 1951, a Boholano bishop, Most Rev. Manuel Â MascariÃ±as, D.D. of Antequera, took the reins of the diocese for more than twenty years.

In 1976, Most Rev. Onesimo Gordoncillo, then Auxiliary Bishop of Dumaguete, succeeded in the episcopacy. During the 10th year of Msgr. Gordoncilloâ€™s incumbency, the Diocese of Tagbilaran gave birth to a new ecclesiastical territory, the Diocese of Talibon, created on January 9, 1986 by a Papal Bull by Pope John Paul II, and canonically erected on December 3, 1986, under the titular patronage of the Most Holy Trinity.