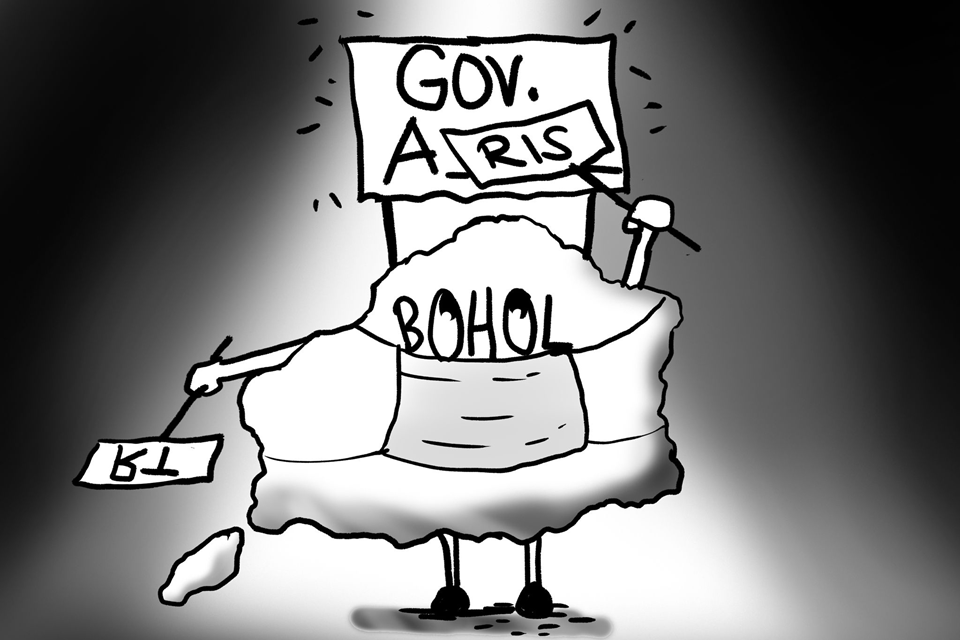 THE PEOPLE HAVE SPOKEN. After years of silence and oppression, they shouted back.

It seemed like Moses throwing down a ton of tablets of the Ten Commandments in anger.

Like the legendary Thor throwing his hammer in pent-up disgust.

Clearly Aris Aumentado was the better alternative. But Art Yap also caused himself to lose.

He was his own worst advertisement. And when the smoke cleared- Art lost by resounding rejection of 185,853 vote difference (62%Aris,37%Art). The People had Spoken Loudly.

Yap only won in 6 towns of the 47 and a city: Balilihan, Jagna, Batuan, Loay, Loboc and Sikatuna.  But only by slim numbers.Even on those towns where his mayors won, Yap lost. In Tagbilaran, the haven of the more educated, Yap crashed by 18,569 votes and  was shellacked in the hometown of Aris (Ubay) by 30,531 votes.

Yap is known to use money to achieve his Machiavellian ends: paying off opposition to run unopposed and flooding the landscape with pesos when challenged. But the governor knew days nearing the election that his fate was doomed and so allegedly- no “second wave” ( as Boholano voters know) came. Why throw good money after bad as the bankers advise?

Gov. Art Yap doomed himself by wide perceptions of corruption, incompetence (not only in the handling of the pandemic), oppression of those who opposed his policies and looking down at the poor only as all “money-wise”.

The corruption charges, allegations and suspicions littered two decades of  his career (2004-2022) -that people said “enough is enough”. People sensed there was a pattern and decided that it was only by yanking him out of power that he will stop his ways.

Fear of losing what business was left with government, many businessmen silently bore the burden of graft so as not to lose business completely. There was no more “mitigation of greed”- it was 18% to 21% “patong”. No secret meetings- it was just allegedly demanded in the open.

Many purchases were blatantly overpriced (from rice, motors to equipment)- many reportedly done off premises outside the province to prevent “leakages” of the slime of graft. They protected the mysterious” Ivan” of the quarry scandal. Many businesses and landowners were squeezed by the stringent rules of the pandemic, and then droves of men with one or two syllable surnames from somewhere descended into Bohol-allegedly to take over them at bargain prices.

In the midst of all that and a Covid crisis , the Yap-controlled SP had the nerve to even contemplate buying expensive vehicles but was halted by the disgusted cries of the people. The “Houdini Act” of using the cars instead for Executive use was halted  and only because the Constitution disallowed it. But the people were completely turned off by this.

Despite his vaunted education (lawyer-economist) and experience as agriculture secretary and 12 years in office in Bohol (9 as congressman and 3 as governor), unfortunately,food in the province remains to this day- prohibitively costly. People were asking why- after 12 years?

During the pandemic, there were two rules of protocol- one for those close to the administration and another for the ordinary mortals.

One of the ordinary mortals , a woman-SLI- jumped off the bridge in Mactan to her death in exasperation. How many such deaths and lose of sanity have happened in our midst (without publicity) while tackling a wily virus and a heartless protocol at the same frigging time.? While most of the medical equipment  purchased during the pandemic were reportedly cornered by a certain Dexter Enterprises, the province remains third- class because of lack of adequate hospital rooms, medical facilities and equipment. Misappropriation of budgetary priorities?

In the first year of the Covid, the province lost P10-B, so the governor claimed. The farmers savaged by the Rice Tarrification Law were given palliatives – and yet millions of sacks of rice were purchased from Luzon and Mindanao -outside the province. Why?  Perishable disaster aid was unduly delayed in favor of photo opportunities for the governor to be there during the distribution. Some sacks of rice worth P1-M for tourism employees rotted, as a consequence. And so on.

Meantime, hundreds of trolls would mercilessly attack those opposing Capitol while exaggerating Yap’s achievements. But many already saw the mirage and were quietly giving Capitol the “dirty dinger” while the latter was enjoying the hubris of being in power and feeling invincible.

The “silent majority” was aching to have their day in court. Insult to  injury, many were called as “mukhang pera” and  this label resulted in insulting even the poorest of the poor who wanted to have some dignity left after being afflicted with hunger  and deprivation for months. Juan de la Cruz was hurt by the condescending definition of the poor by top politicians.

So armed with the sacred ballot on their hands, the people struck back on May 9,2022.

They were egged on by the audacity of 16 town mayors who could no longer stand the stink coming out of Capitol and banded together to condemn them as a “group of one”. Bishop Abet and other prelates cautioned people not to receive poll bribes.

We are, of course, aware that all people are “not always good all the time.” Judas Iscariot fell for the seduction of “30 pieces of silver” and betrayed his Master. In contrast, Jesus who was made human himself (subject to temptations) rebuked  the seduction of Satan who offered Him “all the kingdoms of the world and all its glory..” Indeed we choose our poison.

Then came the strong battering ram called VOCIS, an outspoken civil society reformist group headed by a priest and the remaining pieces of independent media men who refused to lick the goodlife, the cash and cars offered by the powers-that-be and stood their ground.

A combination of all these numbed the people out of their fears and with the power of a broken water dam- unleashed its pent up anger and voted out the wrong people out of office.

And Gov. Art Yap really did shot himself in the foot as he exercised the “art of losing”.

An so, even with hurt feelings and wounded pride, we still wish that the outgoing governor will find his peace in the place he will choose to move on to next. Shalom!