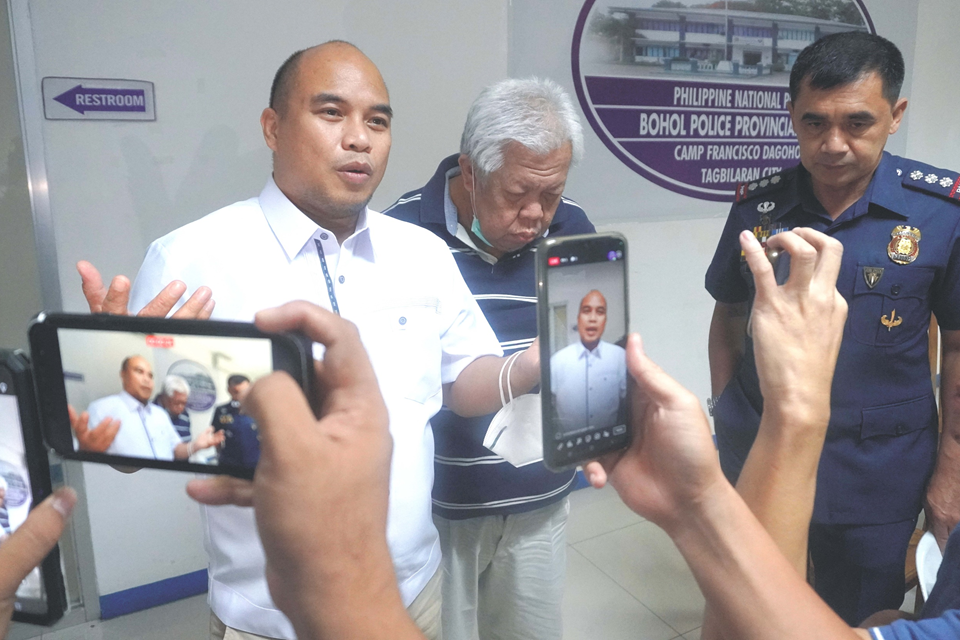 The eradication of the highly controversial “Mr. Ivan” as the tong collector at the Provincial Capitol stands as the living testimony that glaring corruption under the previous administration is over.

This was the categorical statement issued by Gov. Aris Aumentado during his report to the Boholanos last Friday marking his 100 days in office as Bohol’s chief executive.

He said “true to our campaign promise to institute good governance, we took steps to rid the Capitol of unscrupulous people who have soiled the good reputation of Boholanos.”

The so-called “Ivan” who victimized quarry operators, mining permitees and sand and gravel dealers by collecting 30% kickback has been removed from the equation, the governor declared.

The youthful governor likewise reported that while before many local businessmen and suppliers shun away from the Capitol due to rigging of transactions to favored bidders from outside Bohol, there is now a substantial increase of bidders and a more fair and transparent procurement set-up.

In fact, the members of the Bids and Awards Committee (BAC) have to work longer hours now during bidding conferences due to the influx of many interested bidders and suppliers now joining the process with renewed trust and confidence, Aumentado said.

He said that the  biggest move to realize a “Limpyong Panggobierno” was the creation of the Office for Governance Accountability and Review (OGAR) through Executive Order No. 2  in order to  dig into past and present anomalous transactions. The office is being manned by people of highest integrity and probity who are one with the Governor in the goal of keeping our Capitol corruption-free. It is considered as the first of its kind in the history of local government administration and governance.

A detailed framework on how to recover from the devastated economy due to the pandemic and the onslaught of super typhoon Odette emerged as a priority thrust and direction of the Aumentado administration.

This economic recovery program, according to the governor is anchored on his election promise of good governance, “Boholano first policy” and inclusive growth.

The Aumentado administration created the Bohol Economic Recovery Task Force through Executive Order No.1 I issued upon assuming office. Along with it, the Bohol Investments Board was created, composed of government and private individuals and organizations whose mission is focused on reviving Bohol’s economy under the new normal, and in identifying priority areas and incentive packages for investors.

Right on the day of his assumption, Gov. Aumentado hosted the Abante Bohol! Business Dialog where he assembled and engaged select foreign, national and local players in the business sector. This has resulted in many companies now wishing to locate in Bohol and invest resources to new markets and business ventures.

He reported to the Boholanos that two days before his 100th day, the groundbreaking of four resettlement projects for 100 households per town will benefit from the P128 million rehabilitation funds from the national government to rehabilitate Bohol.

These were in the towns of Talibon, Ubay, Pres. CPG and Loboc.

Part of the economic program strategy was the easing up of restrictions without compromising health protocols as well as offering free RT-PCR testing.

Three weeks ago, entering the province no longer needed the vaccination card.

As part of the economic recovery program, the province instituted measures to protect the P1.9 billion poultry industries.

He issued EO Nos. 7 and 19 mandating the control of the Asian Swine Fever (ASF).

Globally, Bohol is attracting notice like a rockstar, he said.

The province was nominated for the UNESCO Global Geopark for its rare geologic monuments, biodiversity, rich cultural heritage and tourism sites, and their being managed in a sustainable and holistic manner. on track to becoming the Philippine’s First UNESCO Geopark.

In line with the tourism development, the province was exposed as a destination by itself during the 33rd Philippine Travel Mart at the SMX Convention Center in Manila last week where a huge Bohol delegation promoted the 4Fs as new tourism magnets: Food, Fiesta, Fitness, and Faith-based tourism strategies.

The province has initially established ties with other countries for possible economic initiatives. The ambassadors of China, Japan, Hungary, and Poland have lately visited and offered to partner with us in forthcoming ventures.

The objective of having a reliable and affordable power supply likewise tops the priorities of Gov. Aumentado.

Barely two weeks after his decision to focus on power develop0ment, the 27-Megawatt Solar Power Project of PetroGreen Energy Corporation in Dagohoy.

Meanwhile, he said he foresees the installation by November 2023 of the 600MW double circuit Cebu-Bohol interconnection project of the National Grid Corporation of the Philippines (NGCP). Prime Infra of the Razon group in a Letter of Intent for the supply of renewable energy for the province.

There is likewise a private sector now working on the solar-powered water desalination projects funded under the PRDP to convert seawater to quality drinking water for the island barangays in Talibon, Bien Unido and other municipalities…continuing with our consultations and discussions with our LGUs on how to satisfy  the water needs of our constituents.

The provincial government created “Task Force Isda” applied the buyback scheme and people flocked to the old airport in Tagbilaran City to avail of cheaper fish.

The governor said the Task Force Isda is now developing a sustainable program to solve this particular problem that will involve empowering our marginal fisher folks and making them serious players in the industry.

The first arrival of almost three towns of fish from Zamboanga affected the pricing of ordinary fish as “borot-borot” down to P160 to P170 per kilo, instead of the more than P200 per kilo price before.