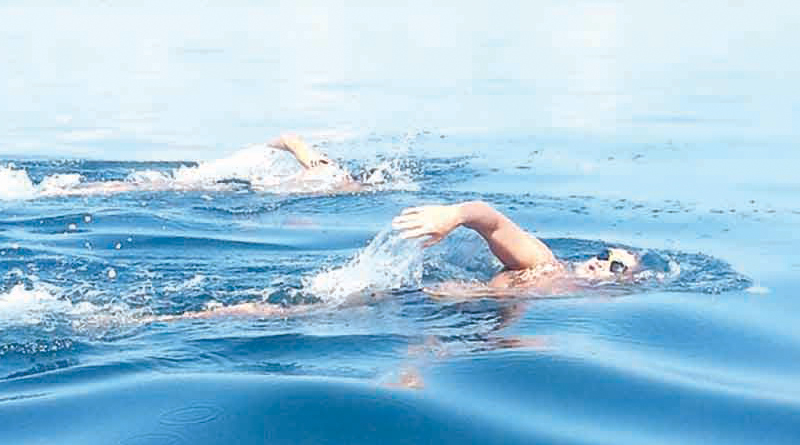 Pinoy Aquaman, Ingemar Marcarine, also popular in Bohol as the swimming lawyer, on Sunday made another historic swim crossing 10.38 kilometers from Grande Island in Bataan to Driftwood Beach in Barrio Barreto in Olongapo City, Zambales.

They made it in three hours and 47 minutes.

It was another first swim in Subic Bay for the tandem.

Macarine said it was an honor to pair with Lacson who is known as one of the less than five official and documented Filipino marathon swimmers.

Last Sundayâ€™s Subic Bay swim was a charity event in behalf of the families of cycling accident deaths, and also intended to promote bicycle-friendly Philippines.

Macarine also said he also dedicated it to his son, Lance, for the latterâ€™s seventh birthday last Sunday.

â€œIt is considered the Mount Everest of open water swims that will test physical and mental strength, courage, sheer human will and heart. We will dare the 35-kilometer ocean between United Kingdom and France,â€ according to Macarine.

He said it might take them 13-15 hours, considering the â€œweather conditions and currentsâ€ in the area.

His preparations include â€œregular open water swims all over the country and multiple sessions in the cold water pool of the Philippine Military Academy in Baguio Cityâ€.

By late June, the FFECST will be moving to the seaside city of Folkestone south of United Kingdom, where Macarine could continue â€œcross-training and begin open water trials and temperature acclimatizationâ€.

The English channel challenge will mark â€œinternational friendship and raise awareness on climate change and global warmingâ€ which are the â€œcore advocacies of the First Filipino International Movementâ€ in line with the COP21 United Nations Climate Change Conference in Paris in December last year.

Lacson also had a two-year stint in the US Army. He is now based in Olongapo where he serves as a wellness and nutrition coach while running a family beach resort in Barrio Barretto.

Lacson attended college at University of California Los Angeles, although he finished elementary school at the Ateneo and Colegio de San Agustin, and high school in the United States at the Army and Navy academy.

In fact, he is honored as the longest active multi-sport Filipino athlete in the world.