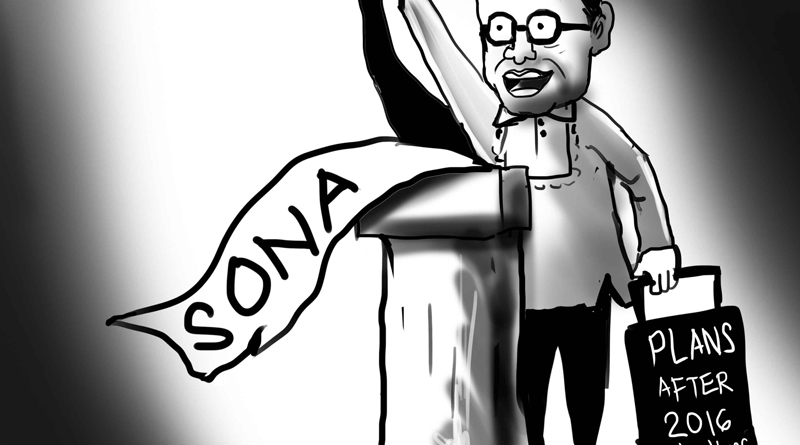 PRESIDENT NOYNOY AQUINO’SÂ Â 6TH State of the Nation Address last Monday night is his swan song. Being such – he brought his report cars and his Wish List for the future.

To start with, barring none, President Noy is the best communicator of all Philippine presidents after Ferdinand Marcos. He speaks the national language in a deep baritone voice Â even as he self-deprecates himself as “not perfect” and makes fond of his scarce hair. As in ” less hair to comb and more face to wash”.

Aquino laces his speeches with story-telling -and who does not want to listen to stories among us- and peppers them with newbie slang likeÂ Â “e, di wow”Â Â and “thank you, bow”.Â There is still a dint of humor in a serious spiel- and ask Toastmasters International Â member if this is not the rule rather than the exception.

Even as he trumpeted his well-documented achievements, he had the humility to ask forgiveness from a nation he has done so much for Â – for his administration’s shortcomings. He does not talk above his audience.

While two other presidents before him in Fidel Ramos and Gloria Arroyo hinted at constitutional change that would have favored their Â term extension (in whatever capacity), Pnoy looks forward to his first day as ” Mr. Private Citizen”- smoke Marlboro Â to his heart’s delight , watch concerts,listen to jazz music and find the “love of his life” to be with him in his advanced age.

While his predecessors in Joseph Estrada was removed by EDSA People Power II for graft Â and GMA threatened by coups and negative ratings in her last 16 quarters, Noynoy’s Aquino ‘s honesty and integrity have been Â unassailable even Â when set against the highest standards of deportment.

He disdains “the wangwang” mentality of entitlement and told his relatives in his first SONA to stay out of government which Â made the likes of a Peping Cojunagco, his mother’s brother , hate his guts.Â  In fact, it is Aquino’s reformistÂ “matuwid na daan”Â that has Â spurred international interest into this “Asia’s Rising Tiger” when not too long ago we were “the Sick Man of Asia.”

This has led to the unprecedented average GDP growth rate of 6.2% p.a. Â in his term- leading to the “Investment Grade” given to RP by international arbiters of sovereign risk- the highest in the history of this young republic. And the second best to China in Asia. We cannot debate figures. That is why the 10 Public Private Partnership project Â totals under his regime far exceed in Â monetary value all Â of the PPP projects from Ramos-Estrada-GMA.

On day one, Aquino saidÂ “walang mahirap,kung walang corrupt”Â and he started by making a partisan Ombudsman to resign, a shady Â chief justice to be impeached ,three noble senators arrested Â for graft and corrupt Â senior military men to jail.Â  They used to say only the small fry will fry, not in Aquino’s time.Â  And more are coming to join the list.

Very few credit the administration’s fiscal acumen but we do. Consider that of the unprecedented 2016 budget of P 3-Trillion, one half of that is provided internally by the BIR who collected P 1.5 Trillion in 2014 alone. Tax cases vs -big and small- have been filed by the Taxman. Not even a sterling “best boxer” status of Pacman would qualify Â as an exception for Kim Henares’ sharp sword. Also, a semblance of the bottoms up budgeting Â (BUB) is slowly being implemented ,empowering the LGUs.

Because we are now 100 Filipinos strong, people judge that the GDP growth “has not been inclusive”.Â  But significant dents have been made in this respect. There are now 4.4 million beneficiaries of the “conditional cash transfer” , out of school youth down 1.7 million, the backlogs in teachers, schools and books largely addressed. Seventy eight percent of those for sitio electrification has been achieved.

Businesses are being set up- and it is true it is hard to get accountants these days. That is a real sign of the velocity of business being set up or expanding.Â  The TESDA had provided alternative education- for- hiring system- with 78% of their graduates sure to find work. The K-12 is on stream- we are one of the three last nations on earth to practice this.

In a recent survey , Filipinos ranked second as the most optimistic in terms of “job opportunities” in the radar.

Ninety million Filipinos are now covered by Philhealth. The BPO business now brings in US $18-B revenues to the country ,hiring 1 million people (direct and indirect) Â and RP has now eclipsed India as the world’s largest BPO center. Good news or bad, there are now only 9 million Filipino OFWs, down from 10 million in the past. Proof positive that some OFWs have now found reasons to come back to Mother Pilipinas. The Diaspora has stopped- the reverse diaspora could begin soon.

In the USA, recovery is sometimes measured by housing starts and car sales. RP has increased vehicle sales by a whooping 27% in one year. The EU has removed RP from the fishery “blacklist” and PAL can now fly to Europe due to aviation reforms in the country.

There’s more good news here.Â  After years of hibernating, the Armed Forces is modernizing both its aviation and sea forces while the PNP has more pistols and vehicles now than they have ever had in their history of under-capability.

Along with that Aquino has stood firm against the colossal bully named China and refused to be arm-twisted into a bilateral agreement and has instead run to the international courts for relief- underscoring our stern Â belief in the rule of law. Beijing raged- but Manila did not blink.

For Bohol, Aquino has been a steadfast supporter of projects in good times and bad. After the earthquake he visited Bohol thrice-sleeping inside a tent in Loon one night. Grade A-plus for empathy on the part of the highest official of the land.

Landmark laws,likewise, Â like the Sin Tax , The Responsible Parenthood Â and the Philippine Competition Law Â have been Â right Â responses of the Aquino regime Â to the new realities of this modern century. Aquino has further Â asked for the passage Â soon of the Anti Dynasty Law (since 1992), the BBL (peace at last in Mindanao) and the FOI (to institutionalize Aquino’s reforms past his stay in the Palace).

President Aquino’s 6th SONA acknowledged that the Philippines’ road to the First World country destination Â -is underway- Â but still needs 12 more years from 2016-till 2028. It is important, therefore, that Â we as a people do not lose sight of this long-term perspective.

It begins with electing the right president in 2016. Think about that ,now.