NFA to sell subsidized rice in Bohol while supplies last

NFA to sell subsidized rice in Bohol while supplies last

The National Food Authority (NFA) in Bohol continues to sell subsidized rice varieties in the province as the agency is distributing its current imported rice stock to various localities until it is fully depleted.

NFA Bohol still has 14,000 sacks of rice as of Friday last week and 80,000 more sacks are expected to arrive within the year, said the NFA’s spokesperson in the province Joel Lim.

According to Lim, the NFA was supposed to stop selling subsidized rice last month.

Through the Rice Tariffication Act, the NFA has been relegated to keeping buffer stock for emergency purposes and buying un-milled rice from farmers, but the agency has to sell its remaining inventories which were acquired before the measure’s enactment in February.

Subsidized rice from the NFA which were imported from Vietnam and Thailand are still being sold at P27 per kilo at authorized retailer outlets.

Lim noted that they have not been informed on whether or not more sacks of rice will be transported to Bohol after the 80,000 sacks are sold.

The NFA still has a supply of 4 million sacks of imported rice which are to be distributed nationwide. (A. Doydora)

[NOTE: This story was first published on December 8, 2019 in The Bohol Chronicle’s Sunday print edition.] The ban on… 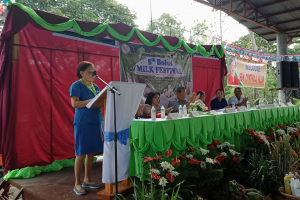