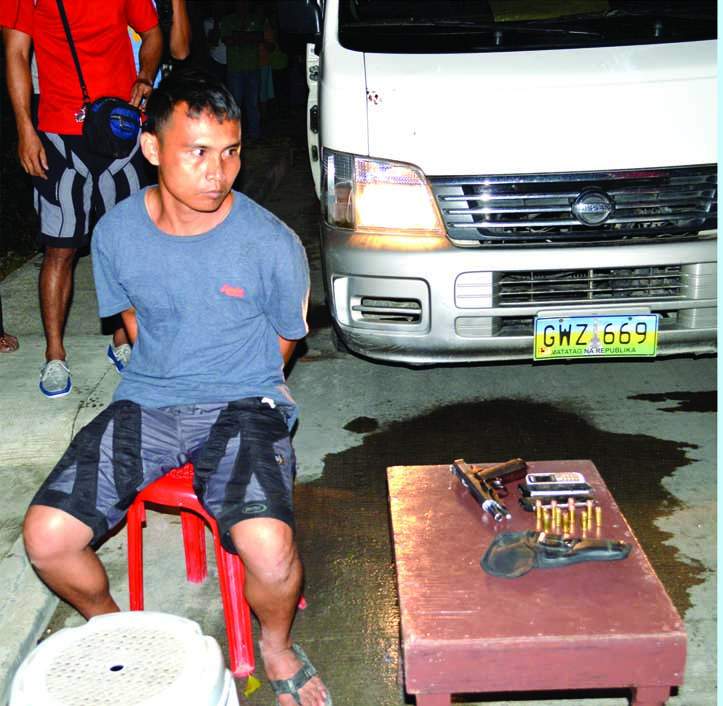 The alleged suspect in the cold blooded murder of radio blocktimer and businessman Maurito Lim fell into the hands of police operatives Friday evening after a three-week massive manhunt coordinated by “Task Force Mau.”
This information was leaked to The Chronicle last night even as police operatives declined to officially confirm that the arrested suspect was the hired gun man who shot dead Lim with a single fatal shot while inside his Isuzu Crosswind parked in front of radio station DYRD last Feb. 14.
The arrested suspect was identified by the police as Jovane C. Orenia, a native of Danao town but presently residing with his employer at Barangay Poblacion II, this city.
PNP Prov’l Director Dennis Agustin, when interviewed by The Chronicle said they can confirm the report once the ballistic test results and the affidavits of the eye witnesses can be filed either tomorrow or Tuesday.
Seized from the suspect was a caliber .45 pistol and eleven rounds of live ammunition aside from the 11 plastic packs containing white crystalline substance believed to be shabu.
The pistol was tucked near his stomach when operatives cornered him during a buy best operation near the Tagbilaran City Central School along F. Rocha st. past 8 o”clock Friday evening.
Police Senior Inspector Jojit Mananquil, chief of intelligence and investigation of the provincial PNP, who led the joint police team narrated that the bullet which hit Lim on his head was coming also from a caliber ,45 pistol while the CCTV footage clearly showed that the suspect took the firearm tucked in the front portion of his waistline.
A highly placed source told The Chronicle the suspect was placed under surveillance during the past two weeks when an informant pointed to Orenia as having been commissioned to kill Engr. Lim. The source revealed other vital information like the amount supposedly paid for the killing. However, the source declined to reveal the other details of the informant’s confession to the operatives two days after Lim’s murder.
PSI Mananquil said that since they were aware that the suspect always carries a firearm, they were extra careful in timing his arrest.
Last Friday evening was the “best timing,” police said, after Orenia came out from the house where the buy bust operation was consumated. Orenia later told police that the house where he came from was his employer.
Police said other details regarding the suspect’s employer will be revealed after the filing of the formal charges against Orenia at the City Prosecutor’s Office tomorrow.
Seized from Orenia were the plastic packs containing shabu estimated a .22 grams. valued at P2,596, cal. 45 pistol with eleven rounds of ammunition bearing SM 301000003823, a Samsung cellular phone and a disposable lighter.
Orenia is now locked at the City PNP jail awaiting the filing of formal charges against him.

MOTIVE OF THE MURDER
Until presstime, police operatives maintained that the motive behind Lim’s murder was a land deal of which the victim was involved.
The sharing of commission to those who made the deal was being looked into by operatives.
Lim, in his weekly radio program “Chairman Mau On Board” over dyRD with former Gov. Victor de la Serna as his co-host, Lim used to announce some lots for sale.
The blocktimer arrived at the radio station five minutes before his 11am radio program last Feb 14 when the lone gunman in his blue motorcycle arrived at the scene, a minute after Lim parked his Crosswind in front of station dyRD along B. Inting st., this city. As seen in the CCTV footage. the gunman parked his motorcycle at the back of Lim’s car and calmly walked towards the driver’s seat where he pumped the lone bullet on the victim’s head. He walked back to his motorcycle and left the area.
Police described the killer as a “professional” gun-for-hire,
The blocktimer was rushed to the nearby Gov. Celestino Gallares Hospital where he was pronounced dead two hours later due to severe bleeding after the bullet hit his brain stem.