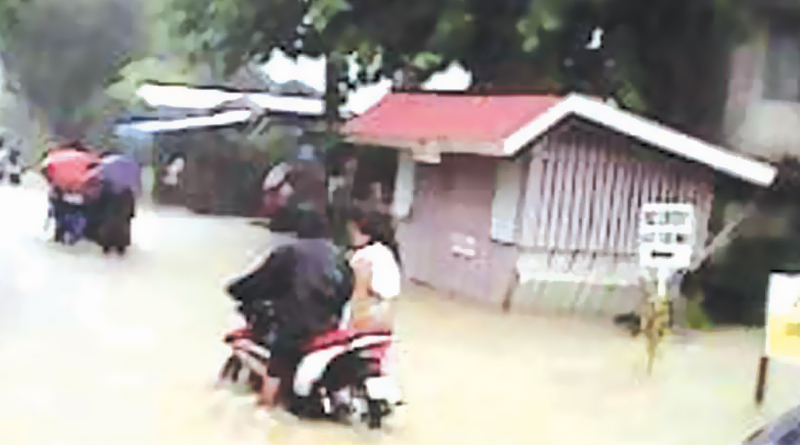 Heavy rainsÂ causedÂ flooding in the town of Jagna, prompting Mayor Fortunato Abrenilla to suspend classes in all levels yesterday.

By 9 a.m., Abrenilla issued an advisory to school officials to keep the pupils and students in the classrooms or in safe areas until it would be safe for them to go home.

Heavy rains had been experienced in Jagna since 2 a.m. until 10 a.m. yesterday.

The flood reached knee-deep in most areas of Jagna, especially across the municipal hall and the main road.

Residents blamed the clogged drainage for the overflow of waste water that led to the floodings in the Poblacion area.

But it surprised residents that the torrential rains have not been experienced in the nearby towns of Guindulman and Anda.

Motorcycle-riders in Jagna had to disembark at a distance from their destination and were forced to soak their feet in the flooded streets.

Most affected areas were barangays Poblacion and Tejero.

Rain water also entered into more than 20 houses in the affected areas.

Residents believed that it could have been worse if it was high tide, considering that the drainage in the affected areas have their outlets to the sea.

The MDRRMC prepared relief goods in case the flooding worsens.

The ongoing construction of drainage funded by the KALAHI-CIDDS program and the local government of Jagna from Jagna Central School to the main drainage of the DPWH along the national highway across the municipal hall also contributed in the flooding.

It had also been noted that the DPWH drainage could not accommodate the bulk of rain water from the KALAHI drainage.

In fact, half of the DPWH drainage had been covered with mud, making it difficult for rain water to flow normally.

For her part, Engr. Liberty Lacsento, head of the maintenance division of DPWH-3rdÂ engineering district, assured to have the drainage cleaned up next week.

On the other hand, trips of small seacrafts and fishing boats might be affected by the gale warning of PAGASA (Philippine Atmospheric, Geophysical and Astronomical Services Administration) on strong to gale force winds expected to affect the seaboards of Mindanao.

Leonardo Samar of the local PAGASA attributed the heavy rains experienced in some parts of the province to the Inter-Tropical Convergence Zone (ITCZ) in the Visayas, Mindanao and Palawan areas.

He said the ITCZ is reacting to southwest monsoon boosted by the storm that is approaching the Philippine Area of Responsibility, causing thunderstorms.

According to Samar, the rains would stop if the storm continues its path upwards towards Japan.

PAGASA tracked the eye of Typhoon Soudelor (international name) outside PAR at 1,720 kilometers east of Luzon with maximum sustained winds of 215 kilometers per hour (kph) near the center and gustiness of up to 250 kph expected to move west northwest at 20 kph.