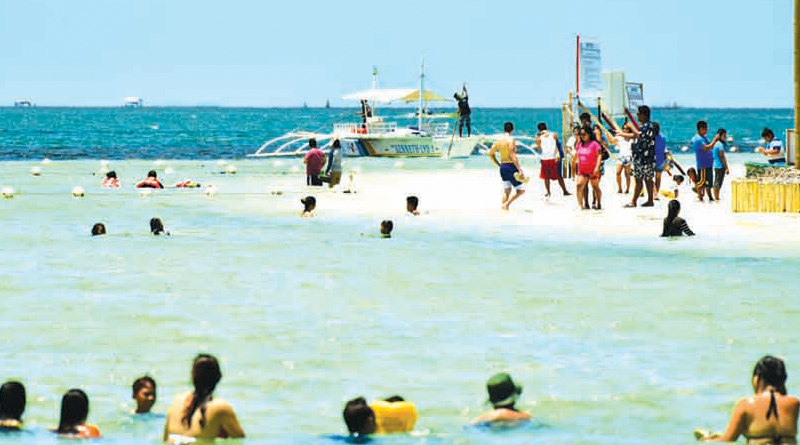 An island off the coast of Panglao, fast becoming known as “Isola de Francesco”, named after Francesco Forgione, widely known as Padre Pio was the center of a demolition job when a flotilla of sea crafts led by the municipal mayor and her top lieutenants mounted an operation to remove buoys put in place by owners of the island in compliance with a Philippine Coast Guard memorandum circular and a municipal ordinance.

Pungtod Island now known as “Isola de Francesco”, a seventeen thousand square meter privately owned island off the coast of Panglao owned and titled under the names of Ramon Rodriguez and Digna Cloribel RodriguezÂ  and a 25 minute hop from the municipal pier has been drawing thousands of visitors and devotees of Saint Pio of Pietrelcina since it was opened to the public last year.

The island was conceived by the owners to serve the growing number of Padre Pio devotees in Bohol and promote devotion to the Italian Capuchin monk who is the first stigmatized priest in the history of the Church.

Blessed Padre Pio was declared a saint by Pope John Paul ll on June 16, 2002 and his intercession for the sick is legendary and known worldwide.

The neighboring island, Gak-ang with an area of 6,000 square meters also owned by the Rodriguez family was not spared by the demolition job, according to Agustin Cloribel, officer-in-charge of the islands.

Rodriguez married the late Digna Cloribel of Lourdes, Panglao, an elder sister of Agustin and is the President of the Philippine Centre for St. Pio of Pietrelcina, Inc.

Montero and Fuertes personally oversaw the successful implementation of an allegedÂ  demolition order signed by Bunao and noted by Montero in full view of the owner and several visitors present in the island.

Coast Guard personnel identified as SN2 Paquito Esarza, SN1 Wesley Bayron and Andres Taguindudo and PO1 Nicolas Jaluag were seen assisting the “volunteers” while Danny Reyes, Executive Assistant for Communications and Transportation of the LGU directed the operation with a megaphone with Montero overseeing the demolition with a handheld radio.

Former Panglao Mayor Doloreich Dumaluan, a long time devotee of Saint Padre Pio witnessed the whole operation and even attempted to convince the “volunteers” including Montero’s group that their actions “were wrong”.

Dumaluan also denied accusations from Montero that volunteers cutting the ropes connecting the buoys were almost hit by his jet ski.

The whole operation was completed in two hours with an estimated more than a thousand buoys, according to the owner dragged to the seashore while the “volunteers” were seen towing buoys to an undisclosed place.

The whole incident was covered by DYRD reporters Rey Tutas who was with Rodriguez group in the island while Allen Doydora stayed with Montero during the operation.

Panglao Police Chief, Police Inspector Joemar Pomarejos told The Chronicle that Montero reported the incident to the police and had it entered into the police blotter.

Pomarejos said that the confiscated buoys are now under the custody of the Municipal Engineer and is now stored beside the police station but no inventory of the number of buoys were included in the report.

Pomarejos also said that responding to a call for police assistance from the owner of the island “upon arrival at the area there were no buoys seen”.

According to Rodriguez no inventory of the buoys taken by Montero’s group was furnished even as he had the incident recorded in the Panglao PNP Police Blotter.

A chanced encounter with Montero and Rodriguez inside the police station witnessed by The Chronicle could have provided an opportunity to initially thresh out problems arising from the demolition job but Montero just asked Rodriguez if he was the owner, which Rodriguez answered “yes”, commented that “mag-blotteray na lang diay ta (will we leave this at the blotter level)” then abruptly left.

Bunao intimated to The Chronicle that he advised the Mayor during a meeting called to discuss the demolition operation the afternoon before the hauling of the buoys to the municipal hall should be the last option.

But according to Bunao, the Mayor was insistent and was firm in her decision to proceed with the operation despite a similar advice from Municipal Administrator Noel Hormachuelos.

Bothered by the turn of events, Bunao reluctantly signed the order for the demolition of the buoys saying “there was too much pressure”. He did not elaborate.

Montero told DYRD “Inyong Alagad” that the owners ignored several notices on the need to comply with the requirements for a business and building permits and was informed about the complaints about the owners highhanded treatment of the fishermen.

According to Montero, fishermen seeking refuge in the island during stormy weather were barred from docking and were greeted with warning shots from the security guards and at times pointed their firearms at them.

“These incidents were all reported to the police and barangay officials”, according to Montero.

But Rodriguez debunked the allegations of Montero saying that the notice to comply with the requirements of a building permit is now in process with certain clearances now in the level of the barangay captain.

He also belied the claim of Montero that fishermen are barred from the island during inclement weather saying “Security guards are under strict orders to assist fishermen seeking shelter in the island and provide food for them”.

As to reports that shots were fired at the fishermen and guns pointed at them, Rodriguez said that Cloribel checked the police blotters and showed no complaints were recorded.

Rodriguez also expressed surprise why resorts with buoys were not included in the demolition order while his island was singled out.

Rodriguez in whose name the island is titled arrived from Manila upon learning of the demolition order and rushed to the island after a quick interview with DYRD “Inyong Alagad”.

Rodriguez said that “IÂ  am disappointed and saddened by the turn of events which is not humane. We are just implementing provisions of a Philippine Coast Guard (PCG) HPCG/CG-8 Memorandum Circular MC No. 03-14 and Panglao Municipal Ordinance No. 6, series of 1998.

The Coast Guard memo was signed by PCG Vice Admiral Rodolfo D. Isorena, PCG Commandant and approved by DOTC Secretary Joseph Emilio Abaya, published in the Philippine Daily Inquirer and UP Law Center on May 2, 2014 and became effective on May 17, 2014.

The MC requires a coastal or beach resort to place a number of buoys (1 for every 10 meters) attached to a safety net spread within the area whenever there is an abrupt depth of water (kantilado).

When there is no abrupt depth of water, the number of buoys placed shall be determined by the owner as safe for swimming purposes and the owner shall also designate a portion of the beach front to be used exclusively for unloading and loading of guests.

No boat, banca or other crafts shall be allowed to enter the designated swimming area fronting the area of the resort, according to the circular.

Rodriguez told The Chronicle that he has religiously complied with the memorandum even as the Panglao LGU expressed ignorance of the existence of the Coast Guard Memorandum while Montero claims that prior consultation with her office is needed before the buoys are set in place which is not provided in the circular.

Municipal Ordinance No.6 unanimously approved on September 28, 1998 by the Sanggunniang Bayan of Panglao and signed by then Mayor Toribio L. Bon also prohibits the mooring of all seacrafts, whether attended or unattended across any developed beach or shoreline of beach resorts and areas utilized by the public for recreation and relaxation.

The ordinance also states that no mooring buoys or devices shall be utilized without the approval of the municipal engineer.

“We have sent notices and memorandums to the owners to dismantle the buoys surrounding their island and comply with setback requirements including building and business permits but were ignored upon the instruction of the owners”.

Danny Reyes, Executive Assistant for Communication and Transportatin told DYRD “Inyong Alagad” assured the owners that “if ever there are moves by the municipality to remove the buoys it will be the answer to the clamor from fishermen that the island has been off limits to them even during stormy weather”.

Pungtod and Gak-ang islands went under a complete clean-up after it was neglected by the owners and was considered home to fisherfolks for several years.allowing unbridled use of the island that was blighted with trash.

After several years the island was turned into a pilgrimage center for Saint Padre Pio and at the same time as a way station for visitors looking for a place to unwind and recharge their spiritual batteries under a clean and safe surroundings.

The owners provided visitors with free round trip transportation to the island with no entrance fee,Â  world class rest rooms, shower facilities, complimentary native pastries, bottled water, sodas and a small chapel will soon rise that will serve as the tabernacle of the consecrated host and relics of St. Padre Pio.

Isola de Francesco, derisively known before as Virgin Island has been the newest attraction to the growing number of must see destinations in Bohol and this latest ugly episode between the Panglao LGU and the owners of the island is an ominous sign that has the potential to go out of hand and ruin Bohol’s effort to attract more visitors. (Chito M. Visarra/Bohol Chronicle. With reports from Rey Tutas and Allen Doydora)