2 solons could be LP bets next polls 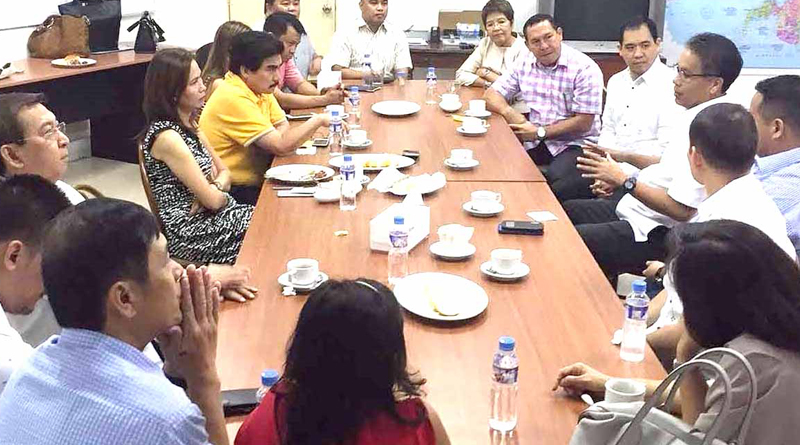 2 solons could be LP bets next polls

Two incumbent congressmen might eventually surface to be taken as part of the Liberal Party (LP) during the 2016 elections even asÂ  they are not party members of the ruling political party with DILG Secretary Mar Roxas as their standard bearer.

This development surfaced after Roxas met last Tuesday with the officials of the Nationalist People’s Coalition (NPC) of which incumbent Rep. Aris Aumentado and Rep. Arthur Yap are party members.

Roxas invited the NPC stalwarts, including Rep. Aumentado during a breakfast meeting held at the “Balay,” one of the headquarters of the ruling party in Cubao, Quezon City.Â  Rep. Yap was not present during the NPC meeting with Roxas.

Rep. Rene Relampagos, one of the LP stalwarts was with Roxas during last Tuesday’s meeting.

During the breakfast meeting hosted by Roxas, he made a categorical invitation for NPC to support his candidacy amid reports that the LP might split into two if Sen. Grace Poe would insist to run for the presidency as an independent bet.

Since Aumentado and Yap are NPC bonafide members, then they can be considered as LP bets in their respective districts in the event that LP will not field a party member. This is a likely scenario since NPC is in coalition with the ruling LP.

In the event that the local LP headed by Gov. Edgar Chatto will confirm the Â coalition arrangement with NPC, the ruling partyÂ  might pick Aumentado and Yap as LP guest candidates in the second and third congressional districts, respectively.
However, there are reports that Board Member Gerry Garcia is showing interest to run for congressman against Aumentado in the second district.Â  On the part of Yap, former Carmen Mayor Cheche Toribio de los Reyes is seriously eyeing to run against him the third district. De los Reyes who was a defeated gubernatorial bet during the last polls is finding her way to the Liberal Party through Â former Cavite governor, now PCSO Chairman Ayong Maliksi as her backer to the top LP national officials.

De los Reyes’ interest to join the ruling party is being closely monitored by local LP officials who categorically vowed to block her entry into the administration band wagon.

Meanwhile, aside from NPC, the other political party which is in coalition with the ruling party is the National Unity Party (NUP), the party where City Mayor Baba Yap belongs when he run and won during the last election. This paves the way for Yap to easily become the city mayoralty bet of the administration camp.

His close association with Sec. Roxas paves the way for his joining the party. A highly placed source toldÂ The ChronicleÂ that anytime soon, Yap and his complete slate once finalized will fly to Manila for their oath taking to the Liberal Party.