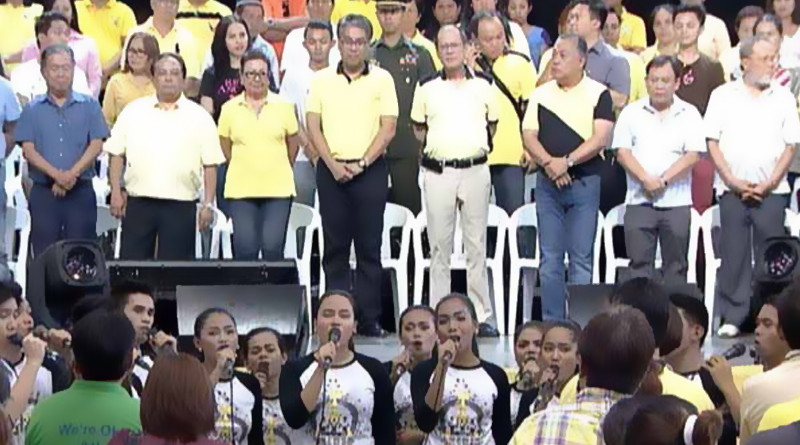 Aquino himself reechoed his trust in the interior secretary—and unlucky runningmate in the 2010 election— to keep the nation on â€œstraightâ€ track during the â€œshow of supportâ€ at the Cebu Coliseum in Cebu City on Monday.

The governor chanced to get updates from attending cabinet officials of their departmentsâ€™ actions on various concerns affecting Bohol.

In his speech, the Bohol leader thanked the secretary for having been behind the provinceâ€™s rehabilitation and recovery from disasters and other crises.

The DILG implements the national P2.3 billion Bohol Earthquake Assistance (BEA) thru the provincial government, which downloads the allocations to LGUs affected by the great earthquake.

Additional completed BEA projects are set for inauguration this week such as the rehabilitated barangay halls in Sawang, Pondol and Canlasid, all in Loboc, one of the hardest hit during the earthquake.

Chatto likewise thanked the contributions of DILG under Roxas to the local and regional development and growth.

The Bohol governor is the chairman of the Regional Development Council (RDC) for Central Visayas.

Cepedoza and Ouano are provincial federation presidents of the Association of Barangay Councils (ABC) and Philippine Councilorsâ€™ League (PCL).

Tagbilaran City Vice Mayor Jose Antonio Veloso, city party chairman, was also invited but could not come while Kag. Agustinus Gonzaga confirmed thru text message that he was in Cebu during the gathering. (Ven rebo Arigo)