No vigilante behind in recent shootings 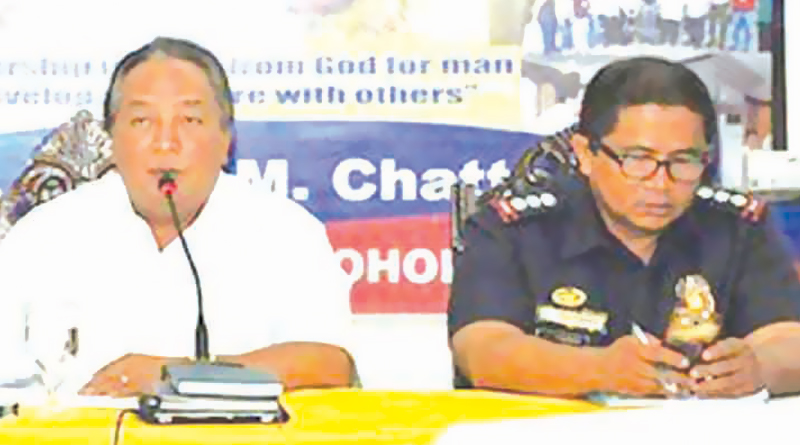 No vigilante behind in recent shootings

Gov. Edgar Chatto dismissed suspicions that a vigilante is behind the series of shooting incidents where most of the victims were known law offenders, such as those tagged in drugs, theft and robbery.

The statement of the governor came after he was given a rundown of the recent shooting incidents during the meeting of the Prov; Peace and Order Council (PPOC) last Thursday.

Conflicts between the victims and the suspects were traced as the motive behind these shooting incidents.

For two several instances, a random survey conducted by top-rated “Inyong Alagad” program of dyRD recorded 86% as in favor on the killings of drug lords and their pushers behind the massive marketing of shabu in the various places in the entire province,
One of the recent victims, a 16-year-old minor, Steve Bulatete, resident ofÂ Hontanosas Extension in Poblacion 3, this city,

had recently been tagged in stealing a service firearm of a security guard. The victim had also been the suspect in earlier cases of carnapping.

The victimâ€™s mother, admitted that she was even the one who helped her son recover the firearm that had been sold already to a foreigner upon reimbursement of the amount of P4,000 paid by the buyer, just so they could return the firearm to authorities.

On Wednesday night last week, she and her husband accompanied their son to the police station to turn over the stolen firearm.

It was already past 9 p.m. when they left the police station and headed to Governor Celestino Gallares Memorial Hospital on board a motorcycle with the victim in the middle.

The suspects, also on board a motorcycle,Â followed them up to the area near Plaza Rizal across the Capitol building and shot the victim once, hitting him in the left cheek.

The victim died after a few minutes.

Based on police record, he had been engaged in a series of carnapping and robberies in the city and escaped from the DSWD custody in Argao, Cebu.

In earlier cases, most of the victims were suspected drug runners who incurred delinquencies in their remittance of the sale from drugs.

Since all the gunmen in the shooting incidents remain at large, suspicions arise that a vigilante group inspired by the Davao Death Squad stepped in to send a message.

However, the governor and the police dismissed the speculation.

In another case, investigators still grope for any lead in the recent murder of a security guard in Calape.

The 36-year-old victim, Agalito Fabiosa, a resident of barangay San Isidro, Calape was shot dead Monday night last week at the public market of the municipality.

The victim was on his way home from work that night when motorcycle-riding gunmen wearing helmet shot him four times using a .45 caliber firearm.

The victim sustained several gunshot wounds in different parts of the body. He was rushed to a nearby hospital but the attending physician declared him dead on arrival.

PO3 Angelo Namang, criminal investigator at the Calape Police Station, admitted they had a hard time figuring out the motive in the killing of the security guard, although it had been known that the victim was a police asset in line with the campaign against illegal activities.

Another man was also shot dead at around 8 p.m. on August 26 in Clarin.

Police identified the victim as on Dominador Arcalesâ€”also known as “Jay-R”, a 23-year-old resident of barangay Bacani, Clarin.

Initial investigation showed that three unidentified men wearing hooded jackets and on board two Honda XRM motorcycles took turns in shooting the victim who was then sitting on a motorbike.

He was rushed to a Clarin Community Hospital but was declared dead on arrival.

According to the police, it could be another drug-related shooting incident.

Another suspected drug personality had been shot dead by riding in tandem at past midnight on August 21 in Talibon, one of the areas tagged as drug havens in Bohol.

Police identified the victim as one Rolando Insila, a 33-year-old resident of Purok 5 in barangay San Jose, Talibon, who was one of those tagged in the murder of then Ubay Chief of Police George CaÃ±a.

The victim was driving his Yamaguchi big bike on his way home at 12:53 a.m. and upon reaching near the intersection of the national highway, two men riding a Honda XRM motorcycle suddenly drove towards him and shot him several times until he died.

The victim had been in the police watchlist of big-time drug personalities in Talibon.

Investigators then concluded the incident was drug-related.

The Talibon incident was the third shooting incident that week. One of the victims, however, survived.

A suspect in theft and robbery incidents, was also shot at past 10:45 p.m. on August 17 at corner Lessage and GallaresÂ Sts. in Poblacion 2, Tagbilaran City.

The victim sustained gunshot wounds at the right portion of the forehead and left cheek.

He survived and was treated at the Gov. Celestino Gallares Memorial Hospital.

Investigators recovered two sachets of shabu from the victimâ€™s possession and some drug paraphernalia.

Scene of the crime operatives recovered an empty slug of caliber 45.

The nurses and other hospital staff then were busy with other patients during that time, according to the chief security officer of the hospital.

The CCTV camera of the hospital showed that Padua left the hospital without being properly discharged, passing through the main gate, wearing jacket and a watcherâ€™s ID.

The hospital chief security officer said the nurses treated Padua like ordinary patients since he was not handcuffed.

Meanwhile, just at around 9:30 p.m. on August 13, another alleged drug personality identified as one William Tan Velez, also known as â€œGudoâ€, a 34-year-old native of barangay Upper Dela Paz, Cortes was shot dead at the roadside of Tamblot St., near the corner of B. Inting St.