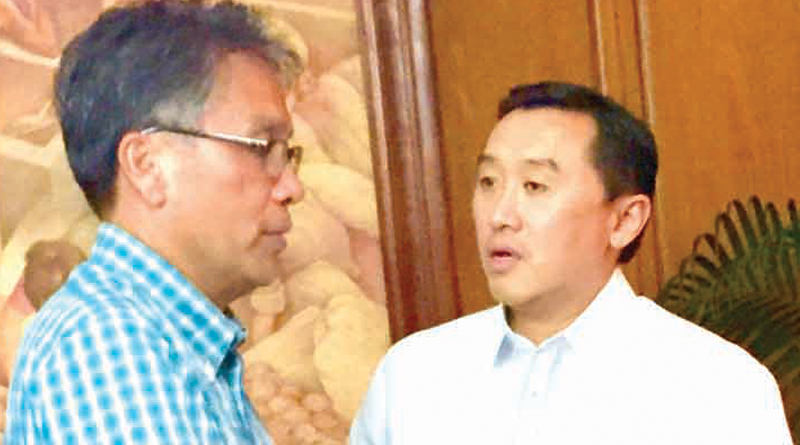 Liberal Party will support the Nationalist People’s Coalition (NPC) to advance â€œMatuwid na Daanâ€ slogan in governance and bring the nation to greater economic heights which trickles to the LP-NPC coalition in Bohol.

LP standard bearer, outgoing DILG Sec. Mar Roxas, re-affirmed the strong coalition between the LP and the NPC with Rep. Arthur Yap as the party bet in Bohol.

Roxas then sought the NPC support for his upcoming presidential battle in 2016.

The LP standard bearer traced ties with incumbent Third District Rep. Yap whom he had worked with when he was yet Department of Trade and Industry (DTI) secretary.

Yap was then on his initial stint in government service in 2001 as president of the Philippine International Trading Corporation with the rank of undersecretary under Roxas who was then DTI secretary.

Roxas expressed that the LP-NPC coalition in Bohol has to be respected, hinting the preference of Yap for the third district race.

That would boot out 2013 defeated gubernatorial aspirant, Che Toribio-Delos Reyes, in getting national backing.

During the recent meeting at the NPC Clubhouse, Roxas articulated that with the help of the NPC leaders, â€œwe will do greater things for our country.”

“We have done great things together.Â  Many of you I have worked with on many issues before and during my stint in government. As a nation, we are more competitive today with a revenue base that is the biggest in Philippine history. This we achieved without new taxes but only through better tax administration. Together, in the last five years, we have built more roads and classrooms since 1986. With your help, we will do greater things for our country,” according to Roxas.

Meanwhile, Yap has this to report to the Bohol constituents:

BUILDING THE NATION TOGETHER

With an impassioned appeal for support as the next President of the Philippine Republic, Sec. Mar Roxas set the tone for the evening’s consultation with members of the NPC.

It was going to be a no-holds barred meeting where members of the NPC were encouraged to engage the secretary on any issue they cared to throw his way.

From nuclear energy, to land reform, from federalism to charter change, from agriculture to the BBL, Roxas was firing on all cylinders.

He discussed the issues incisively and gave no motherhood statements, giving short expositions of the issues with ready solutions for them.

Pressed on mining, he counseled caution, since he did not wish to leave our country scarred from the ravages of extracting irreplaceable minerals.

In energy, he hopes Congress will re-visit the EPIRA law to make power cheaper across the land.

If he had his way now, he will interconnect the Mindanao grid to Luzon and the Visayas and will advocate Government financing of power plant players, to lower the cost of energy.

Roxas believes that high power costs are the culprit to the continued tempered growth of industry even as he declared that Philippine labor is more competitive, if not more so, than China’s.

Former congressman Mark Cojuangco, a staunch advocate of nuclear energy, asked Roxas on nuclear power, to which he replied that he will not object to provinces that will decide to put up nuclear generating capacity since he believes that lower power costs is the missing half to a more valuable, value added economy which will promote more jobs and better pay.

On a topic close to my heart, he advocates Philippine Food Security and will focus on greater post harvest facilities for farmers, as well as technology based farming to increase productivity and wages for our farmers.

He will order national agencies, like the National Irrigation Administration (NIA) to implement projects on the basis of bottoms-up budgeting in irrigation directly from the wishes of LGUs and their stakeholders.

Upon the completion of these irrigation projects, they will be turned over to the Provincial LGU’s for maintenance and management.Â  In reference to ASEAN integration, he believes that scale in agriculture production will be key to lowering costs for farmers for which reason he says Agrarian Reform will not be expanded.

One of the critical issues brought up that night was the proliferation of illegal drugs.

Roxas went quiet and reflective when he was asked to comment on this since he intoned that not even his own family has been spared from this scourge. But rather than focus on penalties, he is more concerned on apprehension, prosecution and conviction of those who are caught involved in the trade and use of illegal drugs.Â  He challenged congressmen present to amend the Anti-Money Laundering Law so enforcers can “follow the money” and hit the drug trade at its core with the avowed objective of capturing big-time operators and financiers, rather than small time pushers, users and peddlers.

Does Secretary Mar believe in Federalism? Well it depends according to him on the size and budget of the LGUs involved. Federalism entails LGU self-financing and economic independence.

Roxas asks: “Is the talk of federalism really a talk about the IRA and revenue shares to the LGUs?”

“Because let me tell you that in the Erap Administration, P26 billion was invested by the national government in Mindanao and P125 billion in the Arroyo years. That is a total of P151 billion in 12 years. In the last five years alone, without federalism, the PNoy Government invested more than P500 billion in Mindanao. We have to be careful that we can financially sustain our LGUs and regions and ensure that we do not slide into fractious factions given our tribal tendencies as a nation,” according to Rocas.

Throughout the discussions, Roxas was focused and direct to the point.Â  It was vintage Sec Mar from our old DTI days where he pioneered programs to strengthen micro businesses through the “palengke’s”, over-saw the headlong push to establish BPO’s in the country and fought for the little man to lower expensive maintenance medicines through a parallel import program.

Considering the substantive subjects being discussed, he was relaxed and forthright. He joked with the NPC members, shared stories with them and did not evade the ticklish issues. One such issue was when Party stalwart Mayor Rex Gatchalian of Valenzuela asked what happens when an LP and NPC member collide for an electoral seat? Frankly and matter of factly, he answered that each area is unique and will be decided upon taking all considerations into account. He did not make blanket promises. But one specific thing he did promise: he assured us that the LP will always accord the NPC with the highest respects. He even reminded and praised the NPC for its staunch and steadfast partnership with the LP these last few years.

By that time, no one noticed that outside, it was raining torrents or that close to two hours had passed since we started our substantive discussions. What was clear was that this was the most extensive and intense discussion the NPC has had with a Presidential aspirant.

As when NPC Party Whip Cong. Dong Mendoza of Batangas signaled the end of the session, Party President Deputy Speaker Giorgiddi Agabao spoke for all of us when he said that Sec Mar was “inspiring” and left no doubt that he “was ready to be President of the Philippines.”

The meeting clinched with an appreciative ovation and broke into a clamor for “selfies” with the beaming candidate.

On his way out, Itook the opportunity to thank him, on behalf of Gov. Edgar M. Chatto, for his constant support of Bohol after our devastating earthquake. He had a knowing twinkle in his eye, clasped my hand, whispered some words, thanked me and was gone. It was a tour de force the NPC will not forget.