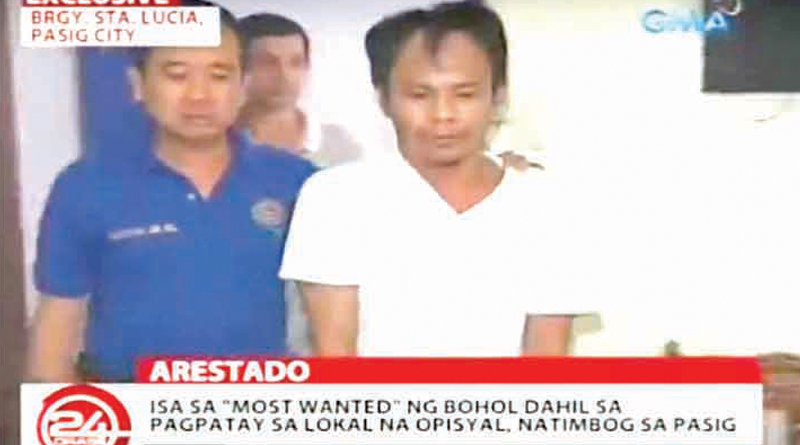 One of the two gunmen in the murder of the barangay captain of Potojan, Tubigon in February last year had gone as far as Pasig in the course of one year and a half of hiding.
The CIDG Detection and Special Operations Unit (DSOU) in Pasig City tracked down the No. 2 Most Wanted Person in Bohol, Wilfredo Toraya, last on Thursday in his hideout in Countryside Village, Barangay Sta. Lucia, Pasig City.

Toraya is one of the two men who riddled the body of then Potojan barangay captainÂ Rosauro Yosuya with bullets at around 1:30 p.m. on February 10 last year.

The team of DSOU officer-in-charge Supt. Zacarias Villegas, together with the Pasig City Police Station, swooped down the house where Toraya was staying in Pasig City based on two warrants of arrest issued by Regional Trial Court Judge Jennifer Chavez-Marcos of Tagbilaran City, Bohol for murder and violation of RA 8294 (Illegal/Unlawful Possession, Manufacture, Dealing, or Acquisition of Firearms, Ammunition or Explosives).

Toraya had been hopping places in Metro Manila, Region 4A and Region 7 after the murder of Yosuya.

Yosuya, then 47, also former president of the Liga ng mga Barangay of Tubigon, was riding a tricycle when two men riding an unregistered motorcycle shot him several times until he died.

Ten of the bullets hit the victim in different parts of the body.

The suspects, with helmets and cloth around their head, tailed on the passenger tricycle that the victim boarded from the Poblacion area on his way home.

The gunmen started shooting when they found the vantage point upon reaching barangay Potojan and kept firing as they pursued the victim up to his front yard.

According to witnesses, the gunmen even kicked the victim who was already down on the ground before leaving.

They were seen fleeing to the upland area of the town.

The 50-year-old tricycle driver, Francisco Libeta Jr., also sustained gunshot wounds in the stomach and thigh and is now in critical condition at a hospital.

The driver tried to escape as the suspects had just opened fire, but he was not spared.

According to investigators the suspects must have taken turns in shooting the victims.