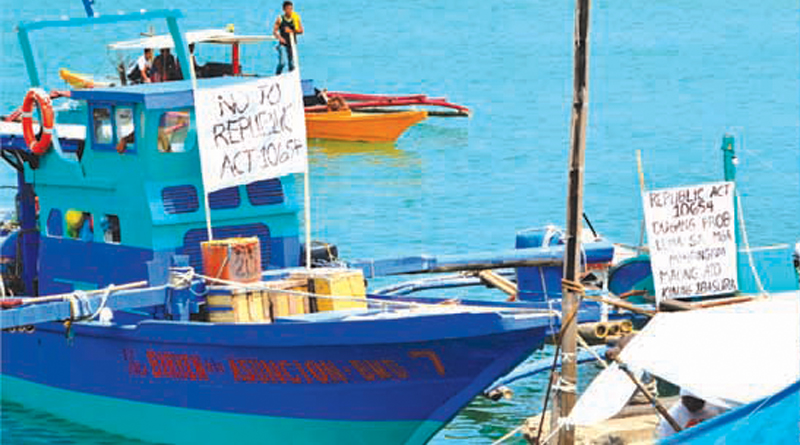 Fisherfolk, through the two-day fish holiday, failed to shake the government into withdrawing Republic Act 10654 that increases the penalties for illegal fishing activities.

Rants against the higher penalty imposed this time, therefore, only confirmed the unabated blatant violations of RA 8550 or the Philippine Fisheries Code of 1998 before its penal provisions had been amended by RA 10654.

Threatening to sabotage the supply of fish to force the government to withdraw the new law proved futile and theÂ Bureau of Fisheries and Aquatic Resources (BFAR)-7 might even be glad the fishermen could extend the fish holiday to one month instead of just holding it in two days so that the small-scale fisherfolk will have more to catch after the hiatus.

BFAR-7 Regional Director Andres Bojos said consumers have nothing to worry since the government can always tap fish traders from other areas with abundant supply of fish to fill up the supply gap in Bohol.

Bojos noted that Gov. Edgar Chatto had already proven it effective during the period after the 2013 earthquake and Supertyphoon Yolanda when local fisherfolk refrained from venturing to the seas.

He said BFAR has teams monitoring the supply of this and in situations like a fish holiday and those during the earthquake and Supertyphoon Yolanda, they can always find ways to fill the supply gap.

It is awkward for them to threaten the government that is finding ways to have equity of resources, according to Bojos.

The new law has no intention to make it difficult for any sector, but to have equity of the resources. It only means only those who respect the spirit of the law is allowed to fish.

BFAR provided Bohol with a freezer van to make sure fish supply reaches the market fresh, thus, helping the fishermen and the traders and providing the consumers with quality product as well.

Bojos managed to get Kenneth Joseph Abuyabor, chapter president of BAPOR, into admitting they had been violating Republic Act 8550 or the Philippine Fisheries Code of 1998 that penalizes illegal fishing, and for one, catching fish within the municipal waters.

Bojos had Abuyabor admitting fishermen had been playing hide-and-seek with law enforcers prior to RA 10654.

Now with RA 10654 increasing the penalties provided in RA 8550, Bojos said violators will learn to respect the law.

RA 10654—entitled â€œAn Act to Prevent, Deter and Eliminate Illegal, Unreported and Unregulated Fishing, Amending Republic Act No. 8550, otherwise known as â€œThe Philippine Fisheries Code of 1998,â€ and for other purposes—lapsed into law on February 27, 2015.

Abuyabor explained that in between Cebu and Bohol, there are areas where municipal waters overlap and they are left with limited portions to catch fish.

He said they usually catch fish along the Tagbilaran and Maribojoc areas.

The sketch from BFAR also shows a small portion between Siquijor, Oslob in Cebu and Balicasag in Bohol side that is outside the 15-kilometer prohibited zone, but small-scale fishing vessels could not brave the waves in the area, especially during weather disturbances in the light of climate change.

They could even hardly reach the area, Abuyabor added.

On this, BAPOR asked the government to further amend the law to make the depth of the seawater of an area as reference instead of distance from the shorelines.

Abuyabor said they are usingÂ ring net,Â an active gear but not destructive to corals.

Bojos explained that under the law, small-scale and medium-scale commercial fishing is allowed 10.1 kilometers from the mainlandâ€™s shoreline and beyond as long as the coastal municipality has an ordinance providing for it.

â€œI will request the towns and the city to furnish BFAR of their ordinance so we can evaluate how many coastal LGUs have ordinances allowing small and medium fishing vessels within 10.2 kilometers and beyond,â€ according to Bojos.

It is only the penalties and the requirement of transponder to be installed on the fishing vessels for monitoring purposes.

Even for this requirement, fishermen are given ample time to comply. Operators of large-scale fishing vessels have two years to comply. Deadlines for medium-scale and small-scale vessels or those with 14.6 tonnage come later, based on the implementing rules and regulations of the new law.

Aside from these, there is no other amendment introduced by RA 10654.

Bojos emphasized that the penalties under RA 8550 had been so negligible that anybody can risk violating the law with less cost.

Even with Abuyabor relaying BAPORâ€™s threat to rise against the government if the higher penalties are insisted, Bojos pointed out that the penalties are have been raised to make sure no one would dare violate the law and there would be no problem and it would not be an additional cost on the fisherfolk if they just follow the law.