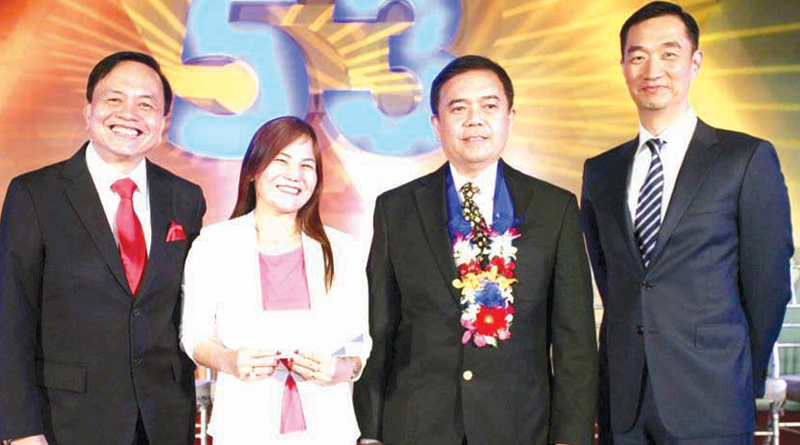 Mayor Miriam Sumaylo has found generous partners in truly making education an enduring legacy to Dauis children, including the kids of a cultural minority called Bajau.

These willing partners have either donated, sponsored or counterparted with the municipal government in constructing new additional classrooms for different schools.

The newest benefactor is the Metrobank Foundation, Inc. which gave P200,000 for a Bajau classroom at Totolan Elementary School.

On behalf of the LGU, Sumaylo received the aid in a turnover ceremony marking early this month the 53rdAnniversary of the Metrobank, which has been conscious of its social responsibility.

The mayor observed an increasing enrolment, which has now reached to over a hundred pupils, among Bajau children after she launched a campaign encouraging their parents to send them to school.

The project is a tie-up with the Filipino-Chinese Chamber of Commerce (FCCC), which itself has own classroom projects for the elementary schools in Tinago, Totolan, Songculan, Bingag, Tabalong and Biking.

The FCCC-assisted school facilities are in counterpart with the municipal government under its lady chief executive.

The mayor traced her partnership with the FCCC back to her service as then barangay captain of Tabalong.

She said the AGAPP Foundation has also responded to the need for additional classrooms at the Tabalong school because of its student populationâ€™s fast growth.

AGAPPâ€™s school building project has bonus fixture and furniture items like ventilation units and chairs as well as learning materials like books.

In partnership with the Holy Name University, the Sumaylo administration built a new school building at Catarmnan Elementary School under the bayanihan concept.

The mayor has proved unto herself that kindness begets kindness in the case of another linkage, this time with the ABS-CBN Foundation, for the Dauis Central Elementary School.

Sumaylo rcounted that the workers of the charity arm of the national television giant used her building in Cogon, Tagbilaran City as base for their earthquake emergency relief operation.

Instead of accepting any rental from the foundation, the mayor asked if it could assist her school building program and she was granted.

Sumaylo thanked the partner-benefactors as she candidly admitted that alone relying on the LGUâ€™s limited resources cannot readily materialize her plan.

Although there are classrooms already built, the mayor expected the entire project with the different partner-benefactors to be fi nished by March and ready for the 2016 school year opening.

Consistency of purpose and faith in every welfare wish to come plus, and most importantly, hardwork can really do a positive difference, according to Sumaylo. Â (Ven rebo Arigo)