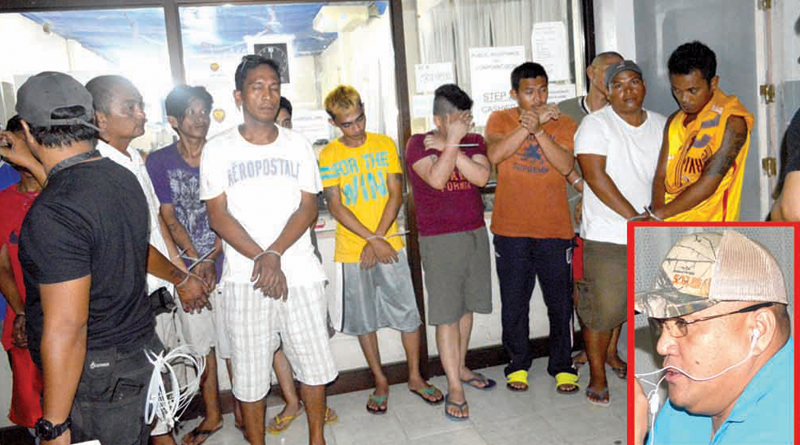 In just a day, a Manila team of the National Bureau of Investigation (NBI) plucked at least 13 drug personalities and seized a cache of firearms and shabu during a string of raids in Barangay Tawala in Panglao and four areas in Tagbilaran City.

Commencing in Panglao at around 6 a.m., it took the NBI team until 4 p.m. to wrap up the succeeding raids in four areas in Tagbilaran City. NBI took until 7 p.m. to turn over the arrested persons to Camp Dagohoy.

The NBI team first swooped down the residence of one Luis Habas, also known as Tata, in Barangay Tawala in Panglao at around 6 a.m. yesterday.

PO1 Benjie AÃ±ana of the Panglao Police Station toldÂ The ChronicleÂ that they only learned of the NBI operation when the wife of Habas came to their station at noontime, looking for her husband, thinking it was the municipal police team who conducted the raid.

AÃ±ana said the NBI team proceeded with the raid without coordinating with the municipal police station.

According to AÃ±ana, the Panglao police team, then under Chief Inspector Petronilo Gracia Jr., conducted a raid in the house of Habas in 2013, but the latter was not around then, but they proceeded with the raid and confiscated several packs of shabu.

However, the court dismissed the drug case they filed against Habas based on the raid.

This time, the NBI team caught Habas by surprise.

From Barangay Tawala in Panglao, the NBI-Manila team proceed to Tagbilaran City, but first dropped by the police station at 9:25 a.m. to place it on record that they would be conducting a series of raids in the city.

In Muslim Village in Barangay Taloto, the NBI team arrested one Jalil Cadar and Jabar Cadar.

They proceeded then to the next target in the same barangay at PeÃ±aflor St. and arrested Reyno Ariel Aray, Rey Francis John Aray, Roy Gordillo, Dominic Manlangit, Michaeladon Barol, and Lor Manigque.

However, at the house of another subject of a search warrant along CPG North Avenue in Barangay Cogon, the NBI no longer caught the target.

In the NBIâ€™s estimate all the packs of shabu seized from the five areas could be valued at P5.3 million.

A cache of high-powered and low-powered firearms had also been confiscated during the series of raids.

The NBI-Manila team obtained the search warrants from by a Regional Trial Court in Manila.

NBI-Manila coordinated with NBI-7 regional office in Cebu as the subjects of the search warrants, are under the latterâ€™s area of responsibility.

According to the NBI, it had been a while already that they had been conducting surveillance operations on the subjects prior to the raids.

NBI National Director Virgilio Mendez had vowed to rid the country of high-profile drug personalities before he retires, according to NBI-7 agents.