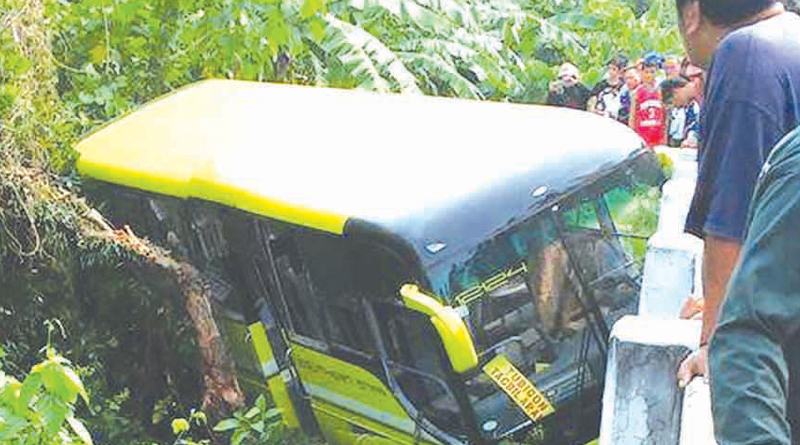 The Sangguniang Panlalawigan will investigate the operation ofÂ Southern Star Bus Company in the province in the light of several road accidents involving their units, resulting to deaths in some instances.

Damalerio cited in his privilege speech during the regular session last Friday an incident where a Southern Star Bus fell from the bridge in Macaas, Tubigon and the accident in Catagbacan, Loon.

A passenger of Southern Star Bus also complained that she and other passengersÂ have been injured during the accident in Catagbacan Norte, Loon recently and were not given assistance in returning home from the hospital.

Marylou Macua, one of those injured in the accident, shared her ordeal to DYRD Inyong Alagad.

She said she was on the front seat and noticed that even at the start of their trip the driver had already been hyperactive, waving to motorists coming from the opposite direction.

He even raced against the City Transit ahead of them and indeed, he managed to take over upon reaching near the boundary of Loon and Calape.

Even with the rough road, they were speeding.

Macua said she heard the driver exclaiming, â€œUy!â€ when they almost hit a tree and then something exploded.

When she looked down the road, they were already at the edge and the tire on her side already slipped.

She noticed then that blood had already flowed from her arms, and they were already rushing to get out of the bus while the driver shielded under the steering wheel.

A motorist driving a sedan car who passed pitied the passengers and brought them to a hospital in Loon where their wounds were treated.

She said they asked to be referred to the Coop Hospital in Tagbilaran for further treatment.

A nurse of the bus company accompanied them at the hospital then.

They went to the office of the Southern Star Bus company and asked the management for assistance such as cash that they could use for their transportation, since they also had to report to work.

However, the management of the bus company refused to extend further assistance, saying all the company could provide was the hospital bills for their treatment and that the victims should present a demand letter, according to Macua.

For his part, LTO-Tagbilaran RegistrarÂ he would send a team to conduct a surprise test in the bus drivers using the alcohol breath analyzer to check for possible drunk driving in the light of the successive road accidents involving the Southern Star Bus.

Patalinghug also expressed alarm on the frequency of accidents involving the Southern Star Bus here compared to other provinces.

Patalinghug also plans to have a dialogue with the management of the bus company, with the presence of LTFRB officials, to get an explanation on the rising number of recent road accidents involving the Southern Star Bus units.

He said the LTFRB has the authority to revoke the franchise of Southern Star Bus if the company fails to address the concern.

While some drivers are suspected to drinking liquor in the vicinity of the Integrated Bus Terminal, IBT supervisor Inday Inting assured that no liquor is allowed in nearby stores to prevent anyone drunk during their trips to the towns.

Damalerio also said they will include in the investigation, concerns on bus drivers being high on drugs and the running condition of the units of the bus company as it is already alarming for one bus company to accumulate record in road accidents.