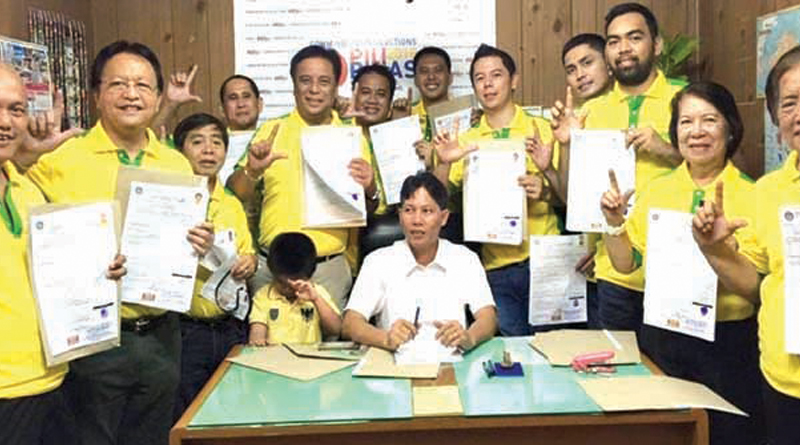 The ruling Liberal Party in the city shows early dominance for the 2016 polls after the group of former City Mayor Dan Lim failed to come up with a complete slate until the filing of the certificates of candidacies (COC) came to a close last Friday.

The group of Lim, meantime, fielded Poblacion I Barangay Captain Arlene Karaan for city mayor with no running mate for vice mayor amid speculations that she will be substituted before Dec. 20.

There were attempts of former Mayor Lim to put up a strong ticket against his nephew, Mayor Yap. For several weeks, he tried to drumbeat his support for the tandem of City Councilor Gonzaga and Vice Mayor Yap. However, this attempt crumbled when Yap and Veloso sealed their tandem to come up with the so-called “unity ticket.”

During a press conference held last Friday during the 38th birthday of Mayor Yap, the new LP tandem forecasts to have more progress in the city

The Bohol LP giants voiced this bold hope in the luncheon gathering of leaders, supporters and friends for the Yap-Veloso unity card

It was the first time that the entire ticket of the newly-minted unity in the city was seen -very much unlike the others.

Yap and Veloso thanked for the efforts which worked out for the unity ticket which at the early stage appeared to be a toll order for Gov. Chatto and Rep. Relampagos to seal.

AÂ harmonious Â obsession for progress is expected to result in Â greater confidence, according to the tandem which is one of the most politically Â potent Â in Â Tagbilaran politics, according to some observers.

Relampagos said the “unity in the city” was Â a mayorâ€™s birthday gift to the constituency and their faith—-â€œa gift of Baba and Toto to the people of Tagbilaran.â€

The solon foresaw â€œa clearer futureâ€ for the city come and past the May 2016 election â€œas we always support Â PNoyâ€™s straight path by supporting Mar and Leni.â€

Yap himself cited the â€œBoholanoâ€ in presidential bet Roxas who wasâ€”and has been— by the Boholanosâ€™ side during the Â epic earthquake episode Â that Â hit the Â province exactly two years ago lastThursday, October 15.

Veloso rallied the Tagbilaranons to appreciate the development programs under the Aquino leadership which has enhanced the growth of this capital city of booming province. The best way to express this appreciation is to support the Roxas-Robredo tandem in the coming election.

During the presscon, the Yap-Veloso team presented certai advocacies Â involving governance reform, revenue generation which even this time is regionâ€™s ablest, tourism, education, social welfare, peace and order and others.

Yap, who is seeking his second term Â as mayor again cited the proposed establishment of a city college that will benefit the childrenÂ  of those who are Â economically “least, last and lost.”

Veloso committed to a legislature that maintains Â a check and balance as he commends Yapâ€™s declared respect for the wisdom and independence of the Sangguniang Panlungsod or city council.

Kagawad Gonzaga, who had himself fought Yap for mayor in the 2013 election, described the Yap-Veloso oneness as a â€œsign of political maturityâ€.

Gonzaga said the unity and cooperation is an â€œenduring giftâ€ on the mayorâ€™s birthday to the people of Tagbilaran.

The city and provincial slates are minting by their team tags alone—â€œTeam BaToâ€ and â€œTeam ChaCoâ€—which respectively stand for Baba and Toto and Chatto and Concepcion, the latter which is the first name of the reelectionist vice governor.

The LP-Tagbilaran group has welcomed social media supporters thru #asensopamore and #bato2016.Â (With reports from Ven rebo Arigo)