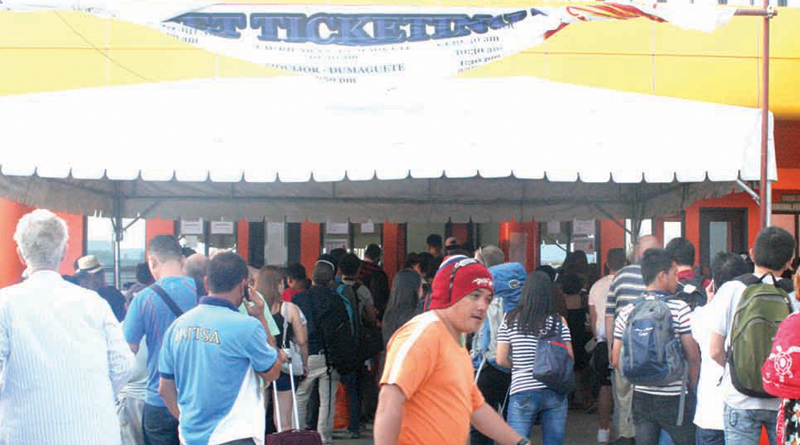 No less than 20,000 passengers have been stranded, from both ports of Cebu and the various Bohol ports since trips of inter-island vessels have been suspended since last Saturday due to the gale warning issued by the Philippine Coast Guard (PCG).

In the city alone, where volume of passengers get in and out of the province through the Tagbilaran City Port, an estimated of 3,500 passengers get stranded everyday due to the cancellation of trips of fast seacrafts,Â Ocean JetÂ andÂ SuperCatÂ Â while the third player,Â WeesamÂ has not yet resumed their daily trips.

During the past four days, trips were cancelled even as both shipping companies ofÂ SuperCatandÂ Ocean JetÂ came up with one vessel each which gross tonnage above 250 tons. The two companies made such vessel design in order to be exempted whenever the PCG will order cancellation of trips due to gale warnings.
SuperCatÂ started to field its 294-gross tonnage vessel whileÂ Ocean JetÂ has its 253 gross tonnage vessel which can continue to travel even if a gale warning is raised.Â  However, with the rains and winds spawned by typhoon Lando, the ship captains of these two vessels ruled to cancel some of their trips due to strong waves. In fact, for several times these past few days, their “bigger” vessels with gross tonnage of more than 250 tons, have to return to their port of origin as the big waves put to risk the safety of their passengers.

Genny Lastimado, Ojet operations manager toldÂ The ChronicleÂ that he would respect the decision of his ship captain to cancel or have their vessels return to destination due to big waves even as their vessels get exempted from the PCG “trip cancellation order” since their vessels are more than 250 tons. The same explanation was issued by Darlon ofÂ SuperCatÂ wherein their trips from Cebu have to return to the port due to big waves.

Hemie Hinlayagan of the local PAG-ASA said this gale warning is raised when the waves at sea would reach from 4 to 5 meters in height.

In an inter-agency agreement, this gale warning is the basis for the PCG to issue cancellation order of trips of vessels below 250 gross tonnage

Late words from the PCG said the gale warning has been lifted was lifted 7 o’clock last night. Trips of all inter-island vessels are expected to resume this morning.