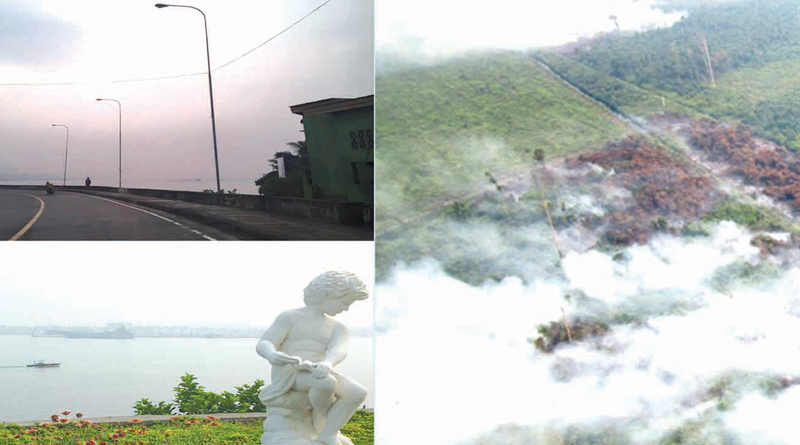 The public is warned of a health risk at the height of the haze reaching the province from the wild forest fire spreading up to these days in some 52,000 hectares in Sumatra and 138,000 hectares in Kalimantan, Indonesia.

Due to the slow wind movement and the absence of rain during the past three days, the haze engulfed most parts of the province causing yesterday the cancellation of all flights from Manila due to very poor visibility of the runway at the Tagbilaran City Airport.

The illegal burning of forests and agricultural land acrossÂ IndonesiaÂ has blanketed much of south-east Asia in an acrid haze.

The haze started to catch the attention of local residents Friday morning with the poor visibilityÂ  even on areas between Dauis and the Tagbilaran City Port which is just across the bay at the distance of 1,100 meters only
By mid-morning yesterday, Gov. Edgar Chatto, through a text message,Â  sought the intervention of Pres. Benigno Aquino III to letÂ  the regional offices of the Department of Environment and Natural Resources (DENR) and the Department of Health (DOH) issue public advisories on the things to do amid the seemingly escalating effects of the haze as observed in most parts of the province. Though not alarming, the haze could stay longer depending on the wind velocity.
An hour after Malacanang received the query from the Bohol governor, TheÂ EMB-7 Ambient Quality Monitoring Team of the Department of Environment and Natural Resources (DENR)-7 regional office issued an advisory for people in areas reached by haze from Indonesia to â€œstay indoors as much as possible and wear protective equipment such as maskâ€.

â€œLimit your outdoor activities as this might trigger asthma problems and other related illnesses. With the very low wind velocity, the haze will be present, we do not yet until when,â€ according to the advisory disseminated through the Philippine Information Agency (PIA).

Provincial health officer, Dr. Reymoses Cabagnot, warned the public that inhaling haze is detrimental to health and the public should take precautionary measures such as wearing a mask to cover the nose and the mouth.

The haze scare cropped up again following reports that it already reached Australia and some parts of Mindanao.

Leonard Samar of PAGASA-Bohol confirmed that the haze from Indonesia had actually dissipated for a while, but came back after the southwest monsoon had been intensified by Typhoon Lando, bringing the haze to country, entering through Mindanao areas facing Indonesia.

In Bohol, the haze is usually noticed early in the morning and in the afternoon until the evening. In fact, some residents early last week claimed they inhaled something unusual smell of a smoke since last Wednesday. The presence of the haze becam intense Friday morning and was worse yesterday as evident when incoming flights from Manila were all cancelled due to poor visibility. Last Friday, flights from Manila to the neighboring city of Dumaguete were also cancelled.

There were even reports that an OceanJet vessel failed to reach Cebu on time after the ship captain could no longer see the right direction to its destination port of Cebu. However, this was denied by Genny Lastimado, Ojet operations manager, saying that with their modern navigational equipment, that will never happen as the radar and GPS will remain consistent in providing the right path to the vessel’s destination even if with a poor visibility

For his part, Dr. Napoleon Nazareno, a city based pulmonary specialist explained that people suffering from existing respiratory diseases is exposed to a higher risk of the haze presence here,.

Short-term exposure to haze, which can be a period lasting for 1-3 days, can aggravate the conditions of those with existing heart or lung diseases.
Heart and lungs become prone to air pollutants upon exposure to haze, as health officials warned the public at the height of haze scare from Indonesia wild fire.

The haze will have more impact on people with existing chronic heart or lung diseases such as asthma, chronic obstructive pulmonary disease (COPD), or heart failure.

For healthy individuals, short-term exposure to haze can irritate the eyes, nose and throat that resolves on its own.

So far, experts continue trying to establish any data on longer-term effects of short-term exposure to haze, while more data are available on studies on long-term exposure to air pollutants.

Nazareno pointed out that second-hand smoking is more dangerous than exposure to haze.

After all, the air is already polluted by the smoke from factories, he added.

For her part, City Schools Division Superintendent Evangel Luminarias said she would issue a memorandum to teachers on Monday to require schoolchildren to wear masks to avoid inhaling the haze, pending advisory from the Department of Health.

Gov. Chatto issued last night a provincewide message to town mayors to get ready of their supply of masks to be used by elderly and children once the presence of the haze will continue

FLIGHTS CANCELLED DUE TO HAZE

Hundreds of Bohol-bound passengers from Manila have been re-routed to Cebu upon the advisory from the tower controller at the Tagbilaran Airport that visibility rate stayed low within two kilometers.

Stranded Manila-bound passengers from Bohol opted to take fastcrafts to Cebu taking their flights at the Mactan-Cebu International Airport.

No Bohol-bound aircraft from Manila has been given clearance to proceed with flights as the thick haze covers the landmarks, in the absence of Instrument Landing System at the Tagbilaran Airport (ILS).

Joel Palingcod, tower controller at Tagbilaran Airport, said it is still uncertain when the haze would dissipate sooner due to low wind velocity.

All flights today remains cancelled because of the uncertainty.

Palingcod said no airline had proceeded with any trip after the first flight from Manila failed to depart upon the advisory on the two-kilometer visibility at the Tagbilaran side due to haze.

With the current visibility score, Maribojoc and Panglao mountains are hardly visible from the Tagbilaran tower control as reference.

He explained that pilots on visual flight rules could only watch for landmarks such as mountains and buildings.

Ideally, aircrafts on visual flight rules are only safe to fly with visibility of at least five kilometers to be able to watch for the landmarks.

Palingcod said he also learned that the situation is even worse at Dumaguete Airport in Sibulan, Negros Oriental where the visibility is only one-kilometer range.

Mactan-Cebu International Airport has the advantage since the runway has light landing facilities aided by a radar.

He said haze is also present in Cebu, but aircrafts managed to land because they have ILS.

In Tagbilaran, the runway has no ILS that couldÂ  guide the aircrafts in finding the path instrumentally, he said.

The illegal burning of forests and agricultural land acrossÂ IndonesiaÂ has blanketed much of south-east Asia in an acrid haze, leading to one of the most severe regional shutdowns in years.

In Singapore, races for the swimming world cup â€“ the FINA World Championship â€“ were cancelled yesterday.. A marathon inÂ MalaysiaÂ set for today was also abandoned and all schools were closed on Monday and Tuesday.

Tens of thousands of people in Indonesia and Malaysia have sought medical treatment for respiratory problems. The annual burning is decades old and Indonesia has faced mounting pressure to end the practice.

Scientists say the pollution could surpass 1997 levels when the haze created an environmental disaster that cost an estimated US$9 billion in damage.

Indonesia has deployed 20,000 security forces police to water bomb the fields and use chemicals to artificially induce rainfall. It also says it has investigated companies and ordered four to suspend operations.

Seven executives from companies involved in the forest fires in Indonesia were arrested by Indonesian authorities yesterday.