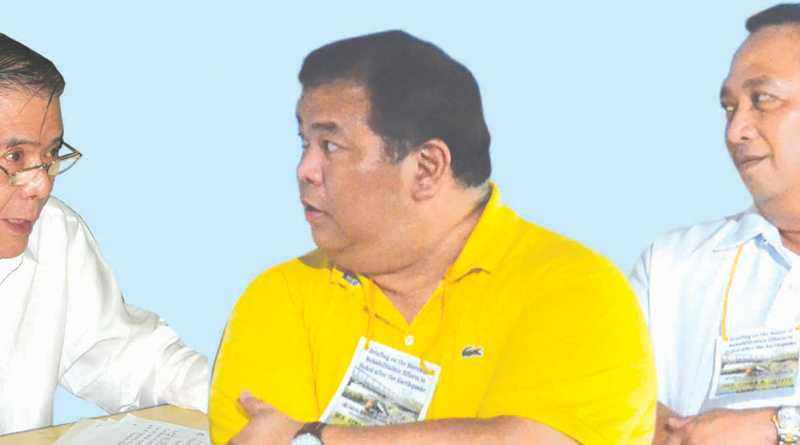 After 15Â  long years, the festering legal saga tagged as the most high profile graft case in the annals of Bohol’s history will finally be heard on it’s merits by the Sandiganbayan 1st Division after the celebratedÂ  case filed against a former governor, vice governor, six former board members, a former provincial attorney and a private businessman was elevated to the anti graft court by the Ombudsman.

The case was raffled on Friday, October 30, 2015 and fell on the sala of the Sandiganbayan 1st Division chaired by Associate Justice Efren De la Cruz and Rodolfo Ponferrada and Rafael Lagos, senior and junior members respectively withÂ  none of the accused arrested as earlier bared by lawyer Victor de la Serna,one of the complaints.

Also indicted were former Board Members Arnold Lungay, Isabelito Tongco, Eufrasio Mascarinas and Felix Uy including present Board Member Tomas Abapo, Jr who was also a member of the SP during the deliberation and signing of the Joint Venture agreement.

Atty. Inocentes Lopez, former Provincial Attorney and Dennis Villareal, officer and representative of the consortium were among those included in the graft case.

All of the above were accused by the Ombudsman of entering into contracts or transactions which are manifestly and grossly disadvantageous to the government.

Ombudsman Assistant Special Prosecutor Manuel Soriano Jr. accused the then top officials of the Provincial Government of Bohol of transferring the assets and franchise of the province owned water and power systems to Salcon Power and Water Consortium for P150 million despite the fact that the combined value of the two utilities is P782 million or a difference of P632 million.

Under close scrutiny, the figures appearing in the Ombudsman information is far less than those alleged by the complainants which is a staggering P1.4 billion according to one of the complainants, Atty. Victor De la Serna.

A certification from the Provincial Accountant’s Office hewed closely to the figures as shown in the Ombudsman criminal information that Â the total assets of the Provincial Government including the Provincial Public Utilities Department, operator of the electric and water utilities amounted to only P628,751,509.93 as of December 31, 1999.

Anticipating the issuance of warrants of arrest by the Sandiganbayan, Chatto, Lim, Tongco, Abapo, Jr., Uy and Lopez filed their bail bonds at the RTC Branch 49 on October 29, 2015 Â while Lungay and Mascarinas are reportedly out of the country.

The six accused filed a P30,000 cash bond for their temporary liberty while Relampagos opted to file an omnibus motion to quash information, prevent the issuance of warrant of arrest and judicial determination of probable cause as part of a legal strategy, according to Atty. Lord “Popot” Marapao lV, legal spokesman of Chatto and Relampagos.

Two members of the SP when the Joint Venture Agreement was approved were re-elected and Â are still with the present SP – Abapo and Tirol.

But petitioners also claimed that the JVA was a “sweetheart deal” since SALCON was “pre-ordained to win in the bidding considering that as early as April 1997 Relampagos entered into a MOU with SALCON to conduct a study for the improvement of the water and electric distribution system owned by the province.

According to petitioners the study gave SALCON “the benefit of three years advance study of the project”.

The deal was hatched by the provincial government to address the need to improve the power and water services of Tagbilaran City and was hailed by the public and private sectors including non government organizations as a model for an LGU/Private Partnership venture.

In said analysis, the advantages and benefits of the Joint Venture were multiple, foremost of which was the establishment of a much more efficient service of both power and water utilities, as widely recognized by the consumers who remember the difficulties under the old Provincial Electric and Waterworks Systems. The publicâ€™s appreciation of the joint venture surfaced during a random survey conducted during the top-rated radio program â€œInyong Alagadâ€ last week.

The LFC’s analysis further found that it is entirely wrong to say that the combined value of the provinceâ€™s power and water utilities was P782M prior to the joint venture.Â That would have been an impossibility, because the figure would have exceeded the total value of ALL the assets of the Provincial Government of Bohol as of December 31, 1999.

The Provincial Accountantâ€™s Office Report as well as the COA Audit Report show that the provinceâ€™s total assets in 1999 amounted to ONLY P628M, which included the value of both power and water utilities,Â 10 hospitals, the Provincial Capitol Complex and its annex buildings, and all other assets of the Provincial Government.

The common consensus of both the LFC and MEB was that the critics’ claim that the combined value of the utilities (power and water) amounts to P782M is both deceptive and malicious. An even more dishonest argument is the addition of the appraised current market value of P135M by the Asian Appraisal of the two utilities prior to joint venture, and the future joint venture business projected value in the forecasted amount of P647.523M, which is merely its POTENTIAL worth, if the joint venture partners would infuse additional funds to pay off existing debts and acquire additional assets. These computations are mere future estimates and not the current value of the two utilities at the time of the project’s inception.

In fact, the certified actual value of the two utilities in the books of the Provincial Accountantâ€™s Office, and as stated in the COA Annual Audit Report, was merely P80 million at that particular time.

The terms and conditions of the joint venture for power states that present total rates prevailing at that time shall be lowered, no increase in basic rates for at least 5 years, a 4% discount to all consumers if power demand reaches amounts projected by the Provincial Government.

the absorption of all employees of the provincial electric system by the winning bidder with the same or even better employment terms formed part of the conditions.

An additional up-front cash of P75 million and free 30% equity in the joint venture (JV) company valued at P22.5 million were also part of the deal.

For the water agreement the JV shall lower rates by P0.30/cubic meter and no increase shall be implemented for at least 2 years while granting an Â additional discount for consumers using less than 10 cu m per month.

Comprehensive rehabilitation, upgrading and expansion of all water equipment and facilities shall be undertaken by the JV company and the absorption of all employees of the provincial water office with the same or even better employment terms.

The JV shall also assume the loan incurred by the Provincial Government for the 1997 rehabilitation of the water system in the amount of P21 million, up-front cash of P80 million and Â free 30% equity in the JV Company, valued at P24 million.

Several legal setbacks were encountered by petitioners in the RTC and the Court of Appeals with the Ombudsman’s reversal resolution as their big break.

At the outset, petitioners also filed a petition for prohibition and issuance of a TRO which was granted by RTC Branch 4 Judge Achilles Melicor but was dissolved and denied petitioners application for the issuance of a writ of preliminary injunction.

Petitioners filed a motion for reconsideration (MR) but Melicor inhibited after they filed a demand for immediate inhibition. The case was re-raffled to Judge Venancio Amila, RTC Branch 3. Amila dismissed the case for lack of jurisdiction and also denied their MR

After the denial of their MR petitioners went to the Court of Appeals 8th Division which issued a 60 day TRO but eventually dismiised the case for “bending the strict rules on wrong mode of appeal” and for their failure to “come up with a cause of action which would entitle them to judicial relief”.

But on August 22, 2014, Ombudsman Conchita Carpio Morales approved the filing of graft charges against Chatto/Relampagos et al thatÂ reversed a previous recommendation for dismissal for lack of merit issued on February 22, 2001 by Graft Investigation Officer ll Sarah Jo Vergara and was approved by Deputy Ombudsman for the Visayas Primo Miro on March 21, 2001.

However, Ombudsman Aniano Desierto and Merceditas Gutierrez failed to act on the recommendation but the dismissal of the graft complaint was eventually approved seven years later by Orlando Casimiro, Acting Ombudsman on July 2, 2008.Â (Chito M. Visarra)