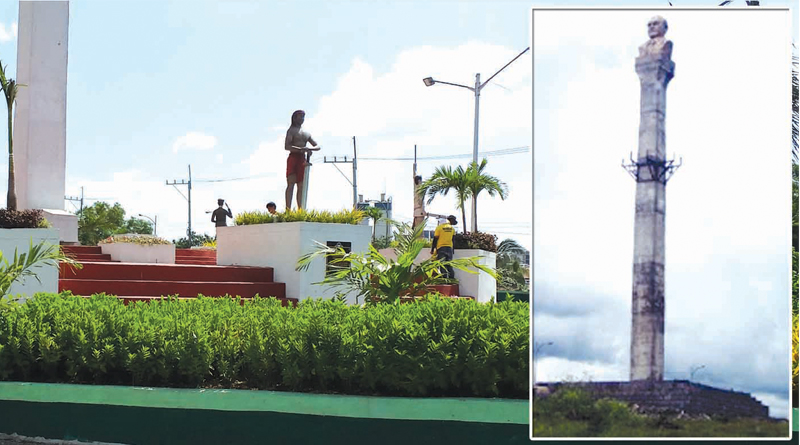 The completion of a massive face lift and clean-up of a monument that stands majestically on one of the major highways in Metro Manila will serve as a fitting tribute to the 119th birth anniversary today, Wednesday, November 4, 2015 of the 8th President of the Republic of the Philippines – Carlos Polistico Garcia, a Boholano born in Barangay Luy-a, Talibon, Bohol.

Former chairman of the Metropolitan Manila Development Authority (MMDA), Atty. Francis Tolentino, heeding the call of concerned Boholanos residing in Metro Manila to give dignity to a structure erected by his predecessor, former MMDA chairman Bayani Fernando ordered the clean-up and beautification of the lot where the monument stands.

According to MMDA Director Francis Martinez, Head of the Metro Parking Clearing Group in an exclusive interview with theÂ ChronicleÂ “upon instructions of Chairman Tolentino we started the clean-up and beautification of the surroundings of the monument five months ago”.

Martinez said that the design and landscaping of the lot was the brainchild of the grandson of Garcia – Jose Carlos Campos who conceptualized the setting up of six statues of historical figures positioned around the garden among them Lapu-lapu, Magellan and MacArthur.

Yellow petunias, golden lily, golden showers, flowering plants such as Yellow Belle and assorted ornamental trees has been planted in the lot surrounding the monument, according to Martinez.

The major face lift done at the base of the monument was estimated to cost Php11 million and initial expenses for the earthworks and landscaping of the area has reached Php 2.5 million.

According to Martinez, a bust of the late president is also now ready for mounting on the base of the monument as a tribute from Mayor Ma. Laarni “Lani” Lopez Cayetano of Taguig City and wife of Senate Minority Leader and Vice Presidential bet Alan Peter Cayetano.

A sight to behold to motorists plying the longest highway in Metro Manila, the monument is located in Taguig City,100 meters from the Circumferential Route No.5 (C-5) exit ramp and the South Luzon Expressway (SLEX).

RA 8224Â renaming Circumferential Route No.5 or C-5 in Metro Manila as the President Carlos P. Garcia Avenue to perpetuate his memory as congressman, senator, vice president and president was approved on November 6, 1996.

A six foot bust done by National Artist for Sculpture, Napoleon Abueva, a native of Bohol is mounted atop the obelisk like monument of which the constructionÂ at the center island of President Carlos P. Garcia Avenue, Taguig City was approved thru MMDA Resolution No.09-01 series of 2009.

The base and lot where the 75 foot monument stands fell into disrepute and was turned into a garbage dump due to neglect, lack of interest of the Bohol Association of Metro Manila, Inc. (BAMMI) and a shortage of funds to maintain the monuments’s surrounding.

On his recent visit to Bohol, Tolentino who is running for a Senate seat in the 2016 elections as an independent told theÂ ChronicleÂ “When I was informed by Senate President Franklin Drilon about the sad state of the Garcia monument, I immediately ordered the massive facelift of the monument”.

The statement of Tolentino took theÂ ChronicleÂ by surprise since the clean-up and development of the base and lot of the Garcia monument were done without public fanfare.

“After the completion of the clean-up project, a three man team from the MMDA has been assigned at the site to ensure the daily upkeep of the site and to prevent unscrupulous persons from dumping their garbage”.

According to Retired NAPOLCOM Regional Director Atty. Bernardo Calibo, the longest serving president of the Bohol Association of Metro Manila Inc. (BAMI), it was during his term that the project was conceptualized and realized.

“Bayani Fernando was then running for President and he realized the voting strength of more than 300,000 Boholanos in Metro Manila that he generously agreed to finance the project”. recalled Calibo.

Fernando bankrolled the construction of the CPG monument and the groundbreakingÂ and unveiling of the CPG bust statue was held on November 7, 2008 after the resolution of a lot dispute where the statue now stands and coincided with the 33rd Metro Manila Anniversary and the Garcia Week Celebration of the Boholanos.

Fernando signed on January 29, 2009 MMDA Resolution No. 09-01 series of 2009 approving the erection/construction of a monument of theÂ of the late President Garcia at the center island of President Carlos P. Garcia Avenue in Taguig City.

The embarrassing and shameful condition prevailing at the base of the monument was brought to the attention of Drilon last year by theChronicleÂ during the wake of the mother of the Congressman Rene Relampagos.

A picture showing piles of garbage around the base and lot of the monument was furnished to theÂ ChronicleÂ by a concerned Boholano, Augustine Cloribel, the only son of the late Gaudencio Cloribel, 1935 Constitutional Convention delegate and former CFI Judge of Manila.

Plans for the inauguration of the CPG monument is now on the drawing board after officials of the BAMMI were informed of the completion of the project by the MMDA with former 1971 Constitutional Convention delegate, Natalio “Chito” Castillo, Jr.Â acting as the coordinator of the event.Â (Chito M. Visarra)