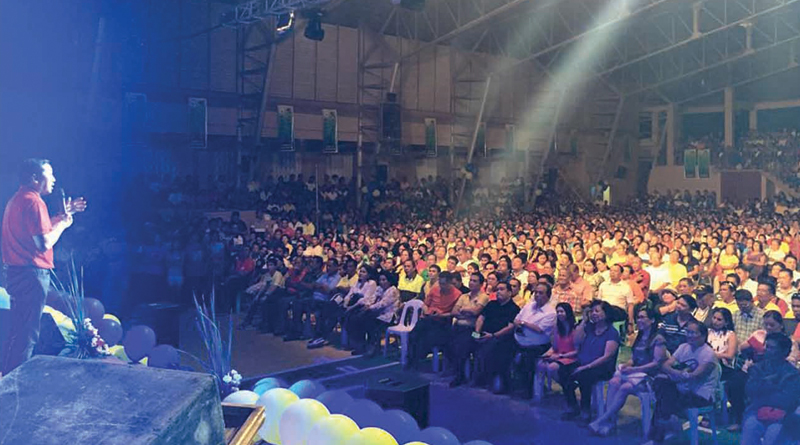 More than 5,000 leaders from the 19 towns of the third district thronged the Loboc gym Monday night to share the celebration in advance of the 50thÂ birthday of Congressman Arthur Yap.

Around 3,500 managed to be inside the gym,Â whileÂ around 2,000 stayed up outside just to express support to the congressman without complaining.

Chatto said he has been impressed at how Yap managed his time to be able to visit all the 436 barangays in the 19 towns of third district in his first term, and facilitated projects in all the areas.

The vice governor, for her part, said it also impressed her how Yap has chosen to become a Boholano and touched the hearts of the people.

In his message, Yap expressed that he shared his 50thÂ birthday to the people to be one in thanking God for the blessings.

Yap announced then that he brought the famous Aegis band to entertain them as a surprise gift, not for himself, but to the people who stood by him and gave him reason to work hard in Congress—draft laws to benefit the people and funnel projects for the barangays and municipalities of his district.

The congressman also expressed how the lives of the people in the barangays he visited inspired him to aspire to advance to a third term and finish all the projects and programs that they had started in the spirit of unity.

In return for such inspiration, he had to sacrifice quality time for his family.

On this, he thanked his wife and children for understanding and his wifeâ€™s clan in Bohol for support, and for making Bohol a home to cherish, for which he intends to leave a legacy of service that the people will continue to benefit even beyond his life.

A representative of the beneficiaries of the Balay Bol-anon core shelter project of Rebuild Bohol Foundation, that Yap formed for the earthquake victims who lost their homes, came up on stage to express gratitude to the congressman.

Other beneficiaries of the scholarship program and medical assistance also showed up as their testimonies were featured in the video presentation during the program.