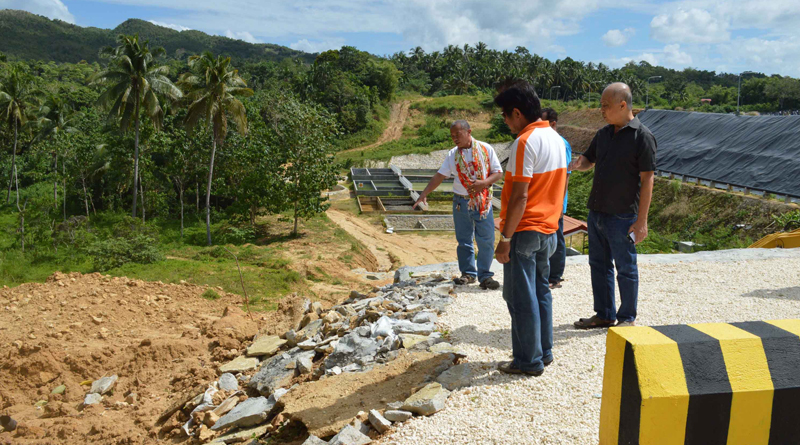 “The construction of the Albur landfill will be completed by the end of November and will be turned over to the Tourism Infrastructure and Enterprise Zone Authority (TIEZA)”.

Thus spoke the foreman of Lourel Construction and Development Corporation, Engr. Lando Tumalib adding to the multiple assurances of completion of the Php55 million phase lll of the Alburquerque Cluster Sanitary Landfill (ACSLF).

Scheduled to be finished on April 12. 2015, the ACSLF was again delayed after the retaining wall for slope protection caved in due to “heavy rains” according to TIEZA.

But Alburquerque Mayor Efren Tungol, apparently tired of the countless reasons for the delay, dismissed Tumalib’s explanation saying “it is the construction per se not the weather”.

Tumalib, interviewed by DYRD reporters Rey Tutas and Willy Maestrado over DYRD “Inyong Alagad” in the landfill site in Barangay Dangay, Alburquerque said in Tagalog “we completed the reconstruction of the collapsed retaining wall in three weeks time just on schedule for our turnover of the finished project”.

The collapse of the retaining wall was due to heavy rains and the quality of the soil that accommodated the structure, according to Tumalib.

With this revelation by Tumalib, the manner of the soil test conducted by the contractor raised serious concern from the Alburquerque Monitoring Inspectorate Team that the quality of the soil is suitable for the construction of the landfill project.

Tungol rushed to the project area upon learning of the presence of a DYRD news team and immediately pointed out several glaring construction lapses among them were the rusting vibratory compactor that was delivered late due to a labor dispute in the US West Coast.

When told about the rust covered compactor, Tumalib explained that the it was just a quick paint over job to fix the problem.

Tumalib told the DYRD news team that the fishpond construction was already finished that would determineÂ the level of toxicity of the water.

But Tungol reiterated that the fishpond should be provided with a geo-synthetic liner and flooring which TIEZA objected.

Tungol clarified that the need for a geo synthetic liner is to prevent water from the fishpond from seeping defeating the purpose of monitoring the toxicity of the water based on the survival of the fishes.

TIEZA maintained that the toxicity of the water seeping from the fishpond has contaminated the water table can easily be measured by the ground monitoring well.

However, Tungol questioned the veracity of the claim of TIEZA that the ground monitoring wells reached the desired depth of 90 meters underground since there was no independent inspector to validate their claims.

Tungol also inspected the reconstruction works done on the collapsed wall but remained unimpressed, according to the DYRD reporters.

The retaining wall supports the road leading to the motor pool building which was also part of the concerns raised by Tungol despite the guaranty of TIEZA on the structural soundness and safety of the building.

However, Tumalib was confident that the project will pass muster since Lourel Construction “meticulously followed the provisions of the contract”.

But Tungol retorted that before the LGU accepts the project, they have to pass the stringent review of the Commission on Audit and the Alburquerque Monitoring Inspectorate Team.Â (Chito M. Visarra)