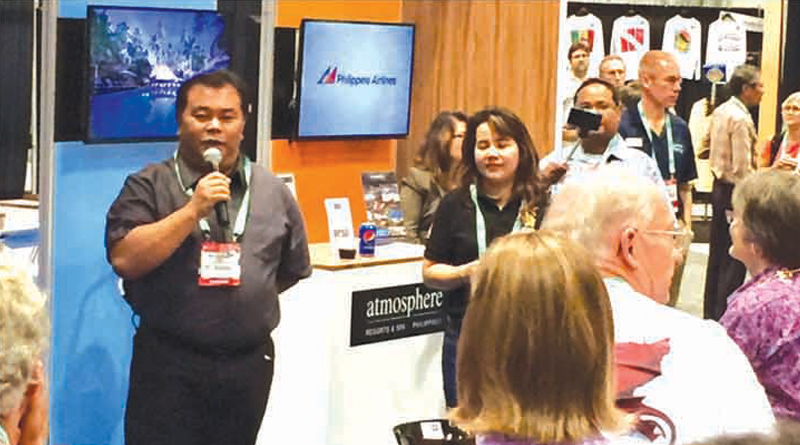 Maliciously reported by his detractors as “technically at large”, 1st District Congressman Rene Relampagos presented proof of his official six day sojourn to the United States even as a Hold Departure Order (HDO) was issued against him by the Sandiganbayan.

Relampagos took exception to the photo’s caption “TECHNICALLY AT LARGE. although he has filed a motion to Dismiss, Reported to be in the US with his family (as of Nov 10, 2015)”, as reported and printed in one of the local papers.

Prompted by the deceptive photo and caption published in a local paper (not theÂ Chronicle)Â Relampagos, chairperson of the House of Representatives Committee on Tourism sent to theÂ ChronicleÂ photos of his stay in the US with his wife and Congresswoman Elisa Kho of the 2nd District of Masbate and member for the majority of the House Tourism Committee.

Relampagos and Kho were in the US to represent the Philippines in the Dive Equipment and Marketing Association (DEMA) Show held in Orlando, Florida, USA held from November 3-8, 2015.

Relampagos also clarified that the HDO issued by the Sandiganbayan was received by his legal counsels after he arrived from the US and is a legal procedure for all accused.

A hold departure order is defined as an exercise of a court’s inherent power to preserve and to maintain the effectiveness of it’s jurisdiction over the case and person of the accused.

Clear photos of Relampagos showing his plump face, wide eyed with a gaping mouth were published in a local paper that was provided by one of the congressman’s vociferous critic, according to the local paper.

Relampagos, in an interview over DYRD “Inyong Alagad” laughed off the obvious attempt to put him in ridicule saying “they must have been referring to my physical size which is extra large”.

However, Relampagos took exception to the blatant cheap shot hurled against him despite public knowledge that the Sandiganbayan did not issue a warrant for his arrest.

Relampagos refrained from posting bail after he filed a 31 page omnibus motion with the Sandiganbayan 1st Division to withhold the issuance of the warrant for his arrest or the immediate recall if one has been issued.

The anti-graft court 1st Division gave due course to Relampagos omnibus motion to “dismiss based on lack of probable cause and/or to quash the information for violation of accused’s right to speedy disposition of cases”.

NOT ON THE RUN

Atty. Lord “Popot” Marapao, IV, legal spokesman for both Chatto and Relampagos and a member of Relampagos legal team also told DYRD “Inyong Alagad” that “he is not on the run and cannot be considered “at large” since there is no warrant for his arrest and he was not arrested”.

Accused is considered in the eyes of the law as an “at large” accused/suspect for his failure to voluntarily surrender to the court and to post bail to face the trial of the instant case;Â (especially of a criminal or dangerous animal), according to legal opinions gathered by the Chronicle

Marapao maintained that “there is no need to flee because the case is bailable and he ready to face the charges because he knows he is innocent”.

In the case of the mug shots, Marapao explained that “these are only required by suspects or accused who are about to be detained.

Marapao pointed out that the photo of Relampagos was chosen to embarrass and mislead and does not conform to the requirements of pictures for the posting of bail”.

Under Supreme Court Administrative Circular No. 12-94 photographs (passport size) taken recently showing the face, left and right profiles of the accused must be attached to the bail documents.

According to the PNP Standard Operating Procedures (SOP) Booking of arrested suspects shall include among others the taking of photographs or mug shots and tenprints.

These pictures shall form part of the police collection of mug shots, pictures and photographs of criminal and suspects kept for identification purposes.

The voracious voyeuristic appetite of the public was also partially satiated after the purported grainy “mugshots” of Governor Edgar Chatto and Vice Governor Concepcion Lim taken as part of legal procedural requirements for those filing for bail were also printed in two local papers.

Anticipating the issuance of warrants of arrest by the Sandiganbayan, Chatto, Lim and five of the fifteen accused filed their Php30 thousand bail bonds on October 29, 2015 at the Regional Trial Court Branch 49.

Chatto. accustomed to the mudslinging by his critics brushed off the malicious intent of the printing of his pictures or “mugshots” as a worn out political maneuver.

The Ombudsman filed a criminal complaint against ten government officials and a private businessman for allegedly selling the assets and franchise of the water and electric systems owned by the Provincial Government of Bohol to the SALCON consortium.

The criminal case docketed as Criminal Case No. SB 15-0283 with the Sandiganbayan alleged that the water and electric system were sold for only a total of Php150 million despite the fact that the combined value of both utilities is Php782 million.

The graft case was based on a complaint filed by six Boholano lawyers led by Atty. Victor De La Serna.Â (Chito M. Visarra)