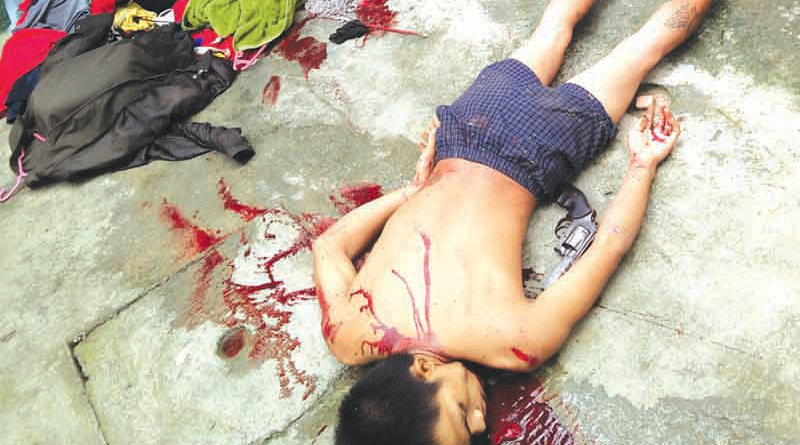 A drug personality who has been out on bail was killed along with his robbery buddy during a shootout Monday morning in barangay Tiptip, Tagbilaran City.

Police identified the slain persons as one Kent Animas and Renan Corporal who had been hunted down by city cops after being tagged in a robbery.

A team from the city police station responded to a report of robbery that transpired at around 10 a.m. on November 23 at Berama Bulding in barangay Dao.

Getting a tip from a concerned citizen, the cops were able to track down the two in a rented house in barangay Tiptip at around 11 a.m.

However, Animas and Corporal tried to shoot the cops, prompting the responding police team to shoot them.

Two other men were seen fleeing the area while the cops were clearing the area.

The responding police team recovered sachets of shabu, firearms and ammunitions from the house occupied by the slain men.

The investigation showed that at 10:12 a.m. on Monday, the city police station received a call from a concerned citizen regarding a robbery at Berama Building along Lara St. at sitio Lanao in Barangay Dao.

The Tactical Operation Center of the city police station dispatched all units to proceed to the incident area.

Upon receiving the information, PO3 Rex Aranjuez, a member of the Motorcycle Anti-Street Crime Unit (MASCU), immediately proceeded to the area.

Aranjuez said that while he was at the area, he saw a motorcycle which driver and backrider wearing black jacket matched the description on the suspects in the robbery incident.

He followed them, and when they were already side by side on the road, he asked the one driving the other motorcycle to stop.

However, instead of stopping, the backrider shot him.

Aranjuez pursued them towards the direction to Barangay Tiptip.

He later felt his left thigh became numb, and realized he was hit.

Aranjuez decided to call the city police station to request for reinforcement.

In response, chief of police—PSupt. George Vale—pulled a team with him, together with intelligence operatives, the Quick Reaction Team, and elements of the Provincial Intelligence Branch—led by police provincial director, PSSupt. Dennis Agustin, and PSInsp. Jojit Mananquil—conducted a joint hot pursuit operation in Barangay Tiptip.

The team then received tip from a civilian at purok 48 in Barangay Tiptip that they saw two men riding a motorcycle, the driver was wearing a black jacket and his backrider was carrying a firearm.

According to the information, the two men were moving fast along a private road heading to an apartment.

The police team proceeded to the area and saw the two men, each carrying a firearm while outside the apartment.

When the armed men saw the approaching police team, they immediately pointed their gun at the cops.

The cops then drew their firearms and shot the two men.

While securing the area, the cops saw two other men fleeing from the area.

After having secured the area, the police team communicated with the forensic investigators from the Bohol Provincial Laboratory (Scene of the Crime Operatives).

The slain persons were then later identified as Kent Animas, married, and Reynan Corporal—both residents of Barangay Dipatlong, Maribojoc.

Both sustained gunshot wounds in the head.

In an interview with the relatives and the administrator of the apartment, the police investigator learned that the suspects rented a room at the apartment earlier this month.

Further investigation showed that the robbery victim, Noel Bayron, a 28-year-old resident of Barangay San Isidro, Mabini, single, had laceration on his right forearm and bruises on the abdomen.

On the other hand, PO3 Aranjuez was treated at the Holy Name Medical Center for the gunshot wound he sustained from the incident.

Animas and Corporal had also been tagged as members of a drug syndicate.

Animas was arrested during a raid in their residence in Maribojoc in September last year, but his brother, Tyrone Animas, who was one of the subjects of the raid managed to flee then.

Both Tyrone and Kent Animas were charged of drug cases, but Kent had posted bail.

Tyrone Animas was, however, arrested after less than a week when the cops tracked him down with one of his buddies in one of the resorts in Tagbilaran City but only after a chase when they tried to swim their way to the pier area.