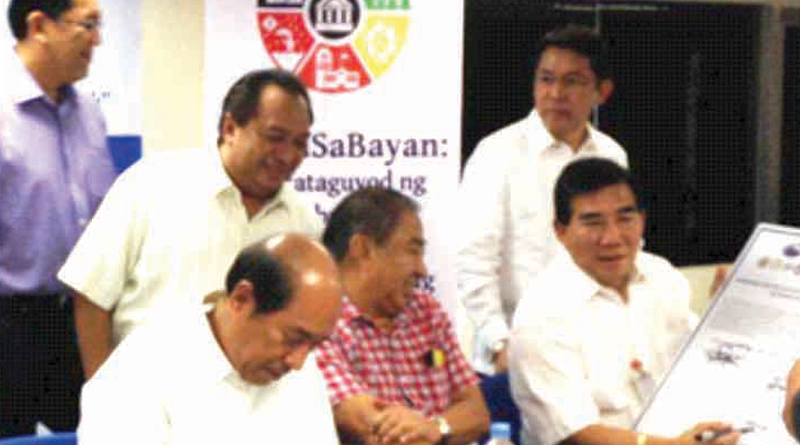 Bohol took the limelight as governors in the entire country took the province as the model on how fast road projects are getting the national budget through the Department of Public Works and Highways (DPWH).
During last Wednesday;’s meeting of theÂ Union of Local Authorities of the Philippines (ULAP) in Quezon City, the government was encouraged to fund several road projects in the entire country with an expanded budget of P20 billion under the KALSADA program.

The 78th executive board meeting of ULAP took Bohol data and figures as a model at all levels after they recognized the brainchild of Bohol Gov. Edgar Chatto the program in which substantial national fund is made availableÂ  to finance road projects even without nationalizing the local roads.

In a unanimous resolution, all governors in the country agreed to adopt the Bohol road project scheme during the launching of the KALSADA program under the Department of Public Works & Highways (DPWH).
In Bohol, close to a billion worth of road projects are being implemented as seen in the concreted highways connecting the 47 towns. This “tourism highway” received budget from the national government under the National Tourism Act of 2009 authored by Chatto who was then chairman of the House committee on tourism. In fact, other provinces have become envious on why Bohol has several of these road concreting projects. Bohol was declared as an eco-tourism province thus making all roads qualified to avail of the national funding.

During the ULAP execom meeting last Wednesday, an â€œexpandedâ€ P20 billion fund for KALSADA has been pushed by DPWHÂ  Sec. Rogelio Singson in full support of the unprecedented road management program championed by the Bohol governor in the League of Provinces of the Philippines (LPP).

Chatto and fellow officers of the governorâ€™s league learned that the proposal of the DPWH secretary to increase the fund was agreed at the recent meeting of the National Economic and Development Authority (NEDA) Infrastructure Committee (IC).

The Union of Local Authorities of the Philippines (ULAP), of which LPP is a leading member, Department of Budget and Management (DBM) and Department of Interior and Local Government (DILG) launched the KALSADA Program at the 78thÂ ULAP National Executive Board Meeting in Quezon City on Wednesday.

The Bohol governor commended Singsonâ€™s move even if both the House of Representatives and Senate already approved the National Expenditure Program (NEP) for 2016, which includes P6.5 billion for KALSADAâ€™s pilot implementation in qualified provinces, with Bohol on top list, next year.

The LPP has designated Chatto as chairman of the leagueâ€™s technical working group for KALSADA and lead lobbyist for the national government approval of the program, a first of its kind in the country, and its budget for pioneering implementation next year.

Some 12,000 barangays across the country have been planned the pilot implementation of the direct download next year.

Chatto, who likewise strongly lobbied for larger BUB budget and its access by the grassroot government unit, said an enabling joint circular from the DBM and other concerned national agencies is up for issuance â€œvery soon.â€

Under the existing system, BUB funds are downloaded only to such local government units (LGUs) as cities and municipalities.

The DBM, DILG and ULAP launched the local autonomy and decentralization programs of KALSADA and BUB under the administration of Pres. Benigno S. Aquino III to strengthen local governance thru direct fund downloading to LGUs.

Also the LPP secretary-general, Chatto emphasized the need of LGUs to secure national government support for vital projects like better road connectivity thru the KALSADA.

This is the first time that a national road incentive counterparting program is introduced based on the model implementation of the Provincial Road Management Facility (PRMF) Project in Bohol and nine other PRMF pilot provinces.

In spite of its implementation start in 2016, the approved P6.5B KALSADA allocation has been pushed by the NEDA-IC, which the DPWH secretary himself chairs, to be raised to P20 billion to cover more kilometers of local roads.

Chatto said once fully developed thru the KALSADA counterparting scheme, the local roads will enhance connectivity, spur economic development, facilitate agriculture & tourism traffic, and provide convenience to the people in the countrysides.

The KALSADA will augur well for business, trade and commerce and, thus, contribute more to local, regional and national growth.

Also called the National Incentive for Local Road Management Program (NILRMP), the KALSADA is a Filipino acronym that translates to â€œgood roads for inclusive growthâ€ or â€œpaved and orderly roads for broader prosperity.Â (with reports from Ven Arigo)