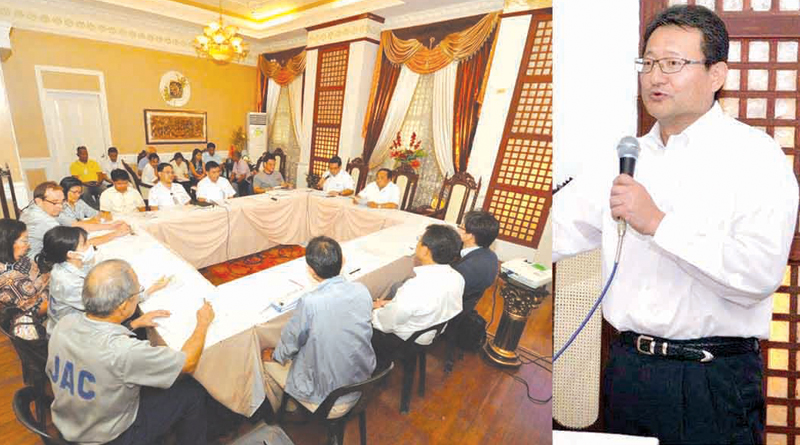 There is no truth to reports that the construction of the New Bohol Airport in Panglao has been delayed, according to Engr. Tadashi Aoi of the Japan Airport Consultants (JAC) during the monthly coordination meeting of the New Bohol Airport Construction and Sustainable Environment Protection Project (NBACSEPP) â€“ Local Project Management Team held yesterday at the Peopleâ€™s Mansion, this city.

The group of consultants assured Gov. Edgar Chatto that the actual construction of structure will commence next month or after the holiday season. The consultants likewise confirmed that barring unforeseen delay, the new airport will be completed in the last quarter of 2017. In fact, test flights are scheduled by December 2017.

Engr. Aoi said that as of now, land preparations are underway, such as soil testing, over which the construction shall be done, starting from the terminal building .

When asked by Provincial Administrator Ae Damalerio if there is a plan for possible construction of Hangar for private planes, the consultants promised to consider it and most probably be constructed at the allowance of 300 meters length at both ends of the runway.

Meanwhile, the Provincial Legal Office confirmed that there are 14 expropriation proceedings that are going on in court, to determine the just compensation for lots covered by the airport construction.

Expropriation proceedings were initiated by the government under its right of eminent domain against those owners of land covered by the airport construction who refused to sell their land.

On the payables and release of funds from Department of Transportation and Communication (DOTC) to the Provincial Government, Chatto assured matters have been brought to DOTC Secretary Jun Abaya.

Meanwhile, for sea port development, Engr. James Gantalao, port manager of the Philippine Ports Authority (PPA), reported that bidding for the Albur Port Rehabilitation has been awarded last Nov 26 and work has started last December 10. Target of completion will be June 23, 2016. He likewise said that the Tagbilaran Port will have an additional reclamation on its left side to accommodate six more ships at one time.

He also reported that a new PPA building will be constructed at the Tagbilaran Port as the newly constructed terminal building will be used for tourism activities. He also said that construction and development of such as additional berthing spaces will be made in the ports of Tubigon, Albur, Talibon and Jagna.