Poe: Bohol catches up with Thailand 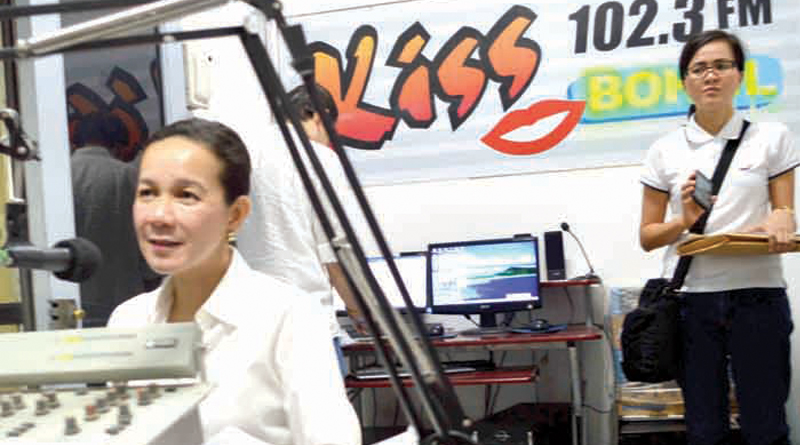 Poe: Bohol catches up with Thailand

Hosting the New Bohol Airport dubbed as â€œA Green Gateway to the Worldâ€, the province will be groomed as the countryâ€™s major entry point of tourists as it is forecast toÂ  catch up with the tourism boom of Thailand.
In harmony with the provincial administrationâ€™s development agenda, Senator Grace Poe, standard-bearer of Partido Galing at Puso, finds Boholâ€™s potentials as significant contributor to the countryâ€™s leverage to equitable development. Chartered flights from abroad can easily follow once the modern airport comes to reality.
Poe visited Bohol last Thursday together with running -mate, Sen. Chiz Escudero, and senatoriables—Manila City Vice-Mayor andÂ National President of Vice Mayors League of the Philippines Isko Moreno, and Pasig City Rep. Roman Romulo.

TheyÂ presented the agenda of Partido Galing at Puso forÂ quality education, equal opportunities for all and job generation to students of Holy Name University (HNU) in a dialogue.

The team underlines equitable national economic development, in which Bohol will take the major role, while simultaneous improvement of the justice system will be the reasonable and lawful means to address poverty that is the root of criminality.

Poe notes that it had been reported that the economy had improved, but many of the Filipinos have been left behind and barely felt the improvement.

She shared that his father, the late Action King Fernando Poe Jr., admired Bohol dearly as he had once shot a film here with Alona Alegre, whom the famous Alona Beach is named after, and had always described Bohol as a beautiful place.

The tourism potentials of Bohol is important. That is why, the implementation of the New Bohol Airport in Panglao must be fast-tracked and it must be ensured that it would be operational as soon as possible, according to Poe.

She said if given a chance to lead the country, she would showcase Bohol in the tourism-for-development agenda.

With agriculture, education, and tourism in the 20-point agenda of Partido Galing at Puso, Poe proposed an alternative irrigation program to help uplift the farmersâ€™ lives and make economic growth inclusive.

She also proposed some means to store and maximize the rainwater that the typhoons bring to the country for the benefit of the farmers to be able to bail out the farmers from irrigation fees.

Poe proposed more small water impounding projects to keep the rainwater and the dikes must be repaired and maintained, from which the government will be able to provide free irrigation to the farmers.

This will be her priority if given the chance to rule the country, citing that there are still around 500 hectares of farmlands that need to be irrigated.

Fast delivery of assistance to calamity-stricken areas will also be prioritized, a move that requires change in the current set up of the government bureaucracy.

Poe commended the provincial administration, though, for having been fast in the quick response and for efficiency as first responder.

Also for the benefit of Bohol and the rest of the country, Poe emphasized the necessity to put the Freedom of Information Law in place to ensure transparency that will cater to genuine change.

She said she had already passed the FOI bill at the Senate, but the Congress had not prioritized it.

Poe also emphasized that to prepare for the economic boom that will come along with the New Bohol Airport, it is important toÂ encourage Filipinos to venture into micro, small, and medium enterprises (MSMEs) like in other parts of the country.

To facilitate this, Poe said government institutions must streamline its registration procedures and extend easy access to financial assistance.

Poe recognizes that more and more Filipinos are having mindset shifts from being an employee to being an entrepreneur, but the lack of capital is discouraging them from going any further.

â€œAt the start of every year, we hear people say they want to start a small business or start investing. However, few have the capital to do so. Most of them, when faced with all the inconveniences they have to go through, abandon the idea altogether,â€ according to Poe.

She said in many cases, entrepreneurs, especially the young, opt to launch their businesses online, which gives them no legal personality if unregistered.

Through Senate Resolution 1486, which she filed last year, Poe urged the Senate Committees on Banks, Financial Institutions and Currencies, and Trade, Commerce and Entrepreneurship to conduct a study, in aid of legislation, on access to financial and banking assistance for MSMEs.

The bill also sought to identify the structural constraints to starting a business.

The Philippines ranked 95th out of 189 countries included in the Doing Business Report released by the World Bank-International Finance Corporation in 2015, which means doing business here is not easy. The report said it would take 34 days and 16 steps to open a business in the Philippines.

â€œMSMEs are the backbone of our economy. They have the enormous potential to pitch in the governmentâ€™s goal of inclusive growth. MSMEs create a lot of opportunities for millions of Filipinos and deserve all the support and backing of our government institutions,â€ the senator said.

Most are involved in wholesale and retail trade, motor vehicle industries, services, accommodation, and food industry.

MSMEs generated a total of 4.9 million jobs in 2012, which is two million more than the jobs created by large enterprises. This indicates that MSMEs account for 64.97 percent of total jobs for that year, according to the Department of Trade and Industry, which releases a report every three years.

Poe urged the DTI to build a whole ecosystem that would integrate government programs supporting the MSME community. This ecosystem must be able to provide intensive professional mentoring, walk-throughs on setting up the business, product development and exploring multi-market opportunities.

â€œWe must create a strong and supportive environment which presents solutions for MSMEs at every step of their businessâ€™ lifecycle and ensure that they are empowered to thrive in the local market and be competitive enough to access the global community,â€ Poe said.

Poe said the government can trim down the business registration process to the recommended eight days and six steps by modernizing the system, processing payments and registrations online, creating more single-window applications, and implementing one-stop shop procedures in all local government units.