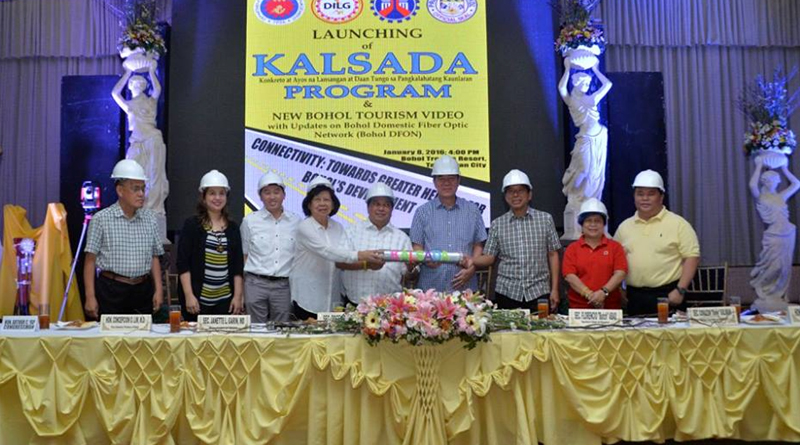 Seen as a game changerÂ for the entire country, the KALSADA program allocates P6.5Billion for performance-based local road projects across 73 provinces in the country.

Patterned after the Bohol experience in local road reforms, the program also comprises aspects of good governance through local road management, rehabilitation and upgrading of provincial roads and turning over maintenance to the Provincial Government, development of a Provincial Road Network Development Plan, and establishment of city and provincial locational referencing system for baseline data purposes.

Speaking before an audience composed of local government officials, national government agencies, business sector, civil society, academe, and development partners that represent their stake in the development of Bohol, ChattoÂ underscored connectivity as a major dream of Bohol in terms of roads as access and an important requirement for enhanced economic activity in order to contribute to national growth.

Chatto who lobbied for the KALSADA program presented the Bohol-Provincial Roads Management Facility (PRMF) partnership project in governance reforms through local road projects where provincial roads were paved while putting in place reforms in government processes such as procurement, audit, revenue collection, information technology, among others.

An audio visual presentation outlined the local roads status of Bohol from poor road conditions due to reliance on inadequate internal revenue allotment to the nationalization of 100 kms of roads through laws passed when Chatto was then congressmen to tourism infrastructure convergence projects under the Chatto-Gordon Tourism Act of 2009, leading to successes in local roads management under the Bohol-PRMF partnership.

Budget Sec. AbadÂ said the program launch is unprecedented and historic as it demonstrates commitment of National GovernmentÂ to good governance initiatives which enable government to perform better in the delivery of services.

For infrastructure alone, there has been a remarkable increase in government spending from P165 Billion in 2010 to P780 Billion for 2016, Abad said.

KALSADA as a variant of Bottom Up Budgeting is an attempt by National Government to address the Â challenge of dispersing growth and promoting inclusive growth, he stated.

DPWH Sec. Singson,Â who keynoted the launching rites, expressed the agencyâ€™s commitments to improve quality and safety of national roads and bridgesÂ and increase investment in infrastructure from less than 2% of GDP in 2010 to 5% of GDP by 2016.

The DPWH as of March 2015, has completed 15,194 kms of national roads as opposed to 5,682 kms of local roads, Singson reported of the premise by which the National Government recognized the need for the KALSADA program.

Singson committed to DPWH principle of Right project, Right cost, Right quality, and Right on time in the implementation of the KALSADA program, even as he also assured paved Bohol roads from Anda through interior roads in Carmen, Batuan to Balilihan to Corella up to the Tagbilaran North Road for 2016, as well as technical support from the DPWH.

Cong. Rene Relampagos and Cong. Art Yap graced the national program launch will also featured an exhibit of local road programs in Bohol, the launch of the new Bohol Tourism video, and an update on the Domestic Fiber Optic Network (DFON) project of PLDT/Smart.Â (Leah/EDCOM)