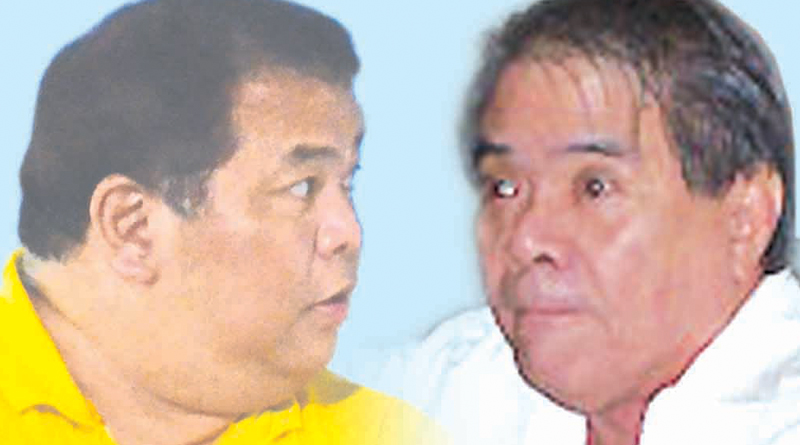 A longtime critic of 1st District Representative Rene Relampagos is now facing a libel suit over a news article published in a local daily capped with a photo allegedly intentionally intended to ridicule him in public.

Former Officer in Charge (OIC) Governor Atty. Victor De La Serna and Johnny Orioque, editor and publisher of theÂ Bohol Daily NewsÂ are respondents of the felony of libel Â with a plea for damages amounting to P5 million.

The complaint was filed before the Office of the City Prosecutor in Quezon City on December 22, 2015

Also, reimbursement of attorney’s acceptance fee of P200,000.00 and litigation expenses amounting to P100,000.00 for the services of counsel “in order to enforce and vindicate his rights”.

The case arose from a November 15, 2015 front page article of the Bohol Daily News showing a photograph of Relampagos captioned “Technically At-Large Although he has filed a Motion to Dismiss – Reported to be in the U.S. with his family (as of Nov. 10, 2015)”.

According to the eight page complaint, De La Serna caused the malicious publication of the article and photograph to expose him to public ridicule and “worse, the impression that he has absconded for he was guilty of the graft charge”.

Relampagos took umbrage at the term “Technically at large” as a public and malicious imputation that he is defying the law and processes of the court or has fled the country to avoid prosecution.

The words “At large”, Relampagos pointed out, connotes that the whereabouts of an accused are unknown or that the accused fled or a warrant of arrest has been returned unserved.

Relampagos told the prosecutor that his trip to the U.S. was on official business to attend the Dive Equipment and Marketing Association Show in Orlando, Florida upon the invitation of the Tourism Department.

As chairman of the committee on tourism of Congress, Speaker Feliciano Belmonte issued an endorsement on October 7, 2015 to the Foreign Affairs Secretary authorizing the trip to the U.S. for the Dive Equipment show and “will travel with his spouse, Mrs. Maria Imelda A. Relampagos.

NO HOLD ORDER AND ARREST WARRANT

Relampagos also disclosed in his complaint that when he left for the U.S. with his wife on November 3, 2015, he was not notified of any Hold Departure Order (HDO) until he returned on November 14, 2015.

The issuance of the HDO was made known to Relampagos only on November 16, 2015, two days after he arrived from the U.S. and his lawyers received a copy of the October 30, 2015 Â minutes directing the Bureau of Immigration to hold the departure of 16 accused of the graft case.

Relampagos also stressed in his complaint that no warrant of arrest was issued against him as of November 15, 2015 as alleged in the published article by the 1st Division of the Sandiganbayan.

As for the venue of the criminal action, Relampagos said that he has been residing at 19 Legarda St., Tierra Verde Homes ll, Quezon City since July 2010.

Citing Foz, Jr. v People (603 SCRA 124), if the offended party is a public officer holding office in Manila at the time of the commission of the offense, the complaint may be filed in the Court of First Instance of Manila.

Relampagos also emphasized in his complaint that residence as used in determining venue for libel cases is not the same with the term residence used for election purposes as decided in Ang Kek Chen v Calasan.

No other critic have pursued Relampagos more doggedly than De La Serna, lambasting him since day one of the celebrated graft case filed against fifteen government officials and a private businessman.

The case filed by De La Serna together with five Boholano lawyers against Governor Chatto, Relampagos, Board Members, former Provincial Attorney has been dragging for 15 years and is now in the 1st Division of the Sandiganbayan.Â (Chito M. Visarra)