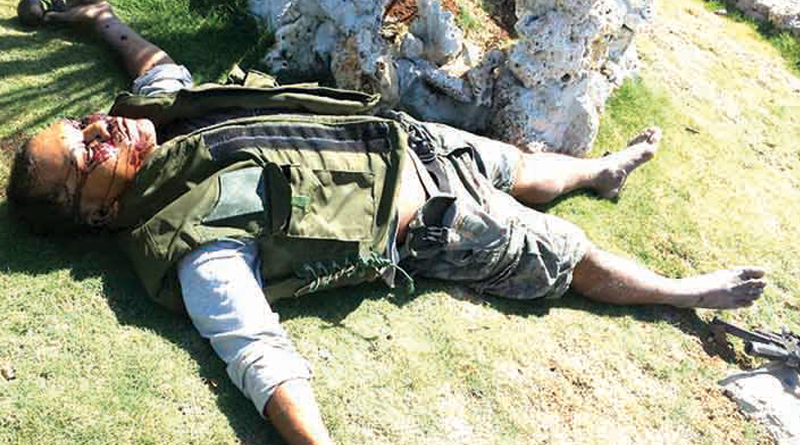 A notorious gun for hire linked to at least 17 killings fell into the hands of operatives early morningÂ yesterdayÂ after he pulled his last gun while on a jet ski inÂ  a beach house in barangay Jagoliao, Getafe town.

The dreaded Elly Job Cabahug, known by many as “Tatay”, was killed duringÂ  a shootout with the pursuing team of the Provincial Public Safety Company (PPSC) while he thought it was just one of those encounters where he could still survive and maintain his reputation to be the most elusive gun-for-hire in the province.

PNP Provincial Director Dennis Agustin who was at the crime scene minutes after the suspect was spotted commended his team under PSupt. Nicomedes Olaivar.

Three teams of the PPSC/SWAT, led by Olaivar, conducted a seaborne patrol at around 6 a.m. yesterday atÂ a beach houseÂ along sitio Teroy in Barangay Jagoliao, Getafe in response to a report from a confidential informant about an armed person indiscriminately firing his gun while riding a jetski.

The PPSC team ordered the man on the jetski to surrender, but the latter, instead, opened fire at the police team using aÂ cal. 45 KG-9 sub-machine gun while holding a hand grenade.

The PPSC team was forced to fire back, resulting to the death of the armed man from a gunshot wound in the head.

Residents nearby later identified the slain person as Cabahug, also known as â€œTatayâ€, a resident of Barangay Asinan, Buenavista..He was wearing a bullet vest.

The Bohol Police Provincial Office later confirmed in the records that Cabahug had been noted as a â€œnotorious gun-for-hireâ€ in the province.

PSuipt. Olaivar toldÂ The ChronicleÂ thatÂ residents near the crime scene openly expressed relief that the person who brought fear and havoc in their barangays is finally gone. In fact, operatives who joined the operation were given fresh seafood and goodies by barrio folks, if only to express their jubilation on the killing of Cabahug.

The slain police character, according to residents, ledÂ a band of contract killers operating in Bohol and nearby provinces.

Based on a classified information from an intelligence informant, Cabahug had conspired in the killing of Engr. Landy Torregosa, and another victim identified as Marlon Manatad.

He was also allegedly involved in the killing of husband and wife, Jonel and Sayong Torregosa at sitio Hulganan in Barangay Overland; and another victim, Gerson Toradio.

Cabahug was also allegedly involved in the murder of a barangay captain of Soong in Lapu-lapu, Cebu while in Clarin, Bohol.

Director Agustin toldÂ The ChronicleÂ that Cabahug was also known to Getafe residents as a drug dealer, andÂ â€œconstantly harassed tourists and local residentsâ€.Â Â Agustin also said that CabahugÂ  trades drugs and guns from Cebu to Getafe and nearby towns whiile he assumes as a caretaker of a beach resort.