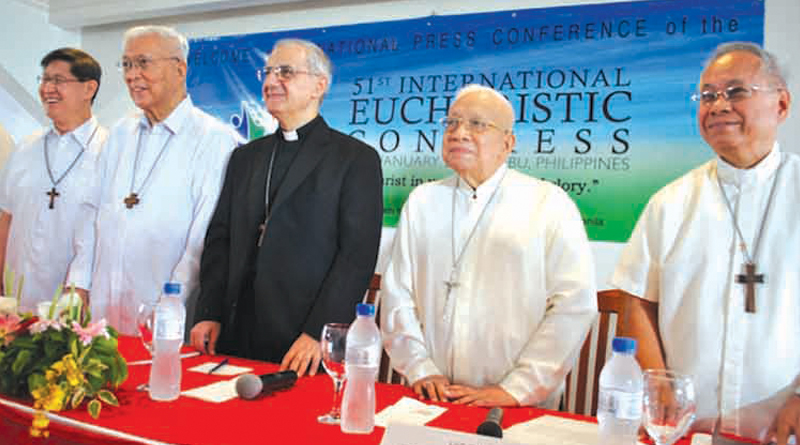 Priests, religious, lay people and youth representatives are among 350 Boholanos joining thousands of delegates from 170 countries to the 51st International Eucharistic Congress (IEC) which opens today with a mass at 4 p.m. at the Plaza Independencia in Cebu City.

The number of Boholano participants does not include delegates who have registered online and have confirmed their attendance to the biggest celebration of the countryâ€™s Catholic Church, which runs from January 23 to 31.

The Diocese of Tagbilaran, with 58 parishes, have sent 124 priests, 53 representatives from the youth sector and 22 from the laity, who will be led by Bishop Leonardo Medroso, according to Fr. Agerio PaÃ±a the diocesan chancellor.

Meanwhile, the 45 parishes under the Diocese of Talibon led by Bishop Patrick Daniel Parcon will be represented by 73 priests, 3 deacons, 10 members of the laity and 36 from the youth many of whom are first communicants joining the Eucharistic congress.

While only around 20 priests are left in charge to administer the affairs of the parishes in the Diocese of Tagbilaran, regular mass schedules at the St. Josephâ€™s Cathedral will be observed including services at the hospitals.

Msgr. Dennis Villarojo, general secretary for the 2016 Eucharistic congress, said organizers estimate there will be 10,000 international delegates and about 10,000 from around the country who will join catechesis sessions.

Another 50,000 to 100,000 people can join in other activities, such as open-air Masses and processions. About 1 million are estimated to join the closing Mass.

Villarojo said the event is open to all churches in Asia.

The Bohol delegation left for Cebu City Sunday morning. Bishop Medroso and Bishop Parcon, on the other hand, are already in Cebu City as the two prelates were scheduled to meet with other bishops who are given tasks to preside over concurrent catechesis and sessions for the IEC 2016 delegates.

Based on the IEC 2016 Calendar of Activities, an opening mass at the Plaza Independencia will kick off the Congress today (Sunday) at 4 p.m., to be led by Archbishop Charles Maung Cardinal Bo, a Papal Legate to the IEC 2016.

There is also a scheduled â€œParish Encounterâ€ on Jan. 27 for the parishioners of San Roque-Subangdako; Gethsemane; Holy Family-Casuntingan; National Shrine of St. Joseph in Mandaue City; St. Joseph The Worker-Mabolo; St. Therese of the Child Jesus-Lahug; Our Lady of the Sacred Heart-Capitol; Our Mother of Perpetual Help-Redemptorist; Sto. Rosario-P. del Rosario; Sacred Heart-Jakosalem; Cebu Metropolitan Cathedral; Our Lady of Lourdes-Punta Prinsesa; San Roque-Mambaling; and Our Lady of Guadalupe-Guadalupe, Cebu City.

A Visita Iglesia, or the visit of churches by the IEC 2016 delegates, is also set on Jan. 28 at the Asilo de la Milagrosa Chapel; Our Lady of the Sacred Heart-Capitol; Our Mother of Perpetual Help-Redemptorist; Sto. Rosario-P. del Rosario; Sacred Heart-Jakosalem; Cebu Metropolitan Cathedral; and Basilica Minore del Sto. Nino.

The IEC 2016 Youth Day is also set to be held on Jan. 28 to 29 at the Hoops Dome in Lapu-Lapu City and at the Mandani Bay at the Mandaue City Reclamation Area.

On Jan. 29, there will be a mass at 4 p.m. at the Cebu Provincial Capitol Grounds, which will be followed by the solemn procession from the Capitol Grounds to the Plaza Independencia.

The culminating mass or the â€œStatio Orbisâ€ will be held on Jan. 31 at 4 p.m. at the South Road Properties (SRP) with Cardinal Bo again presiding.

The IEC is an international gathering of people which aims to promote an awareness of the central place of the Eucharist in the life and mission of the Catholic Church, help improve understanding and celebration of the liturgy, and draw attention to the social dimension of the Eucharist.

This is the second time that the Philippines is hosting the quadrennial event of the Catholic Church, the first one was in 1937 during the 33rd IEC which was held in Manila during the pontificate of Pope Pius XI. (Kit Bagaipo)