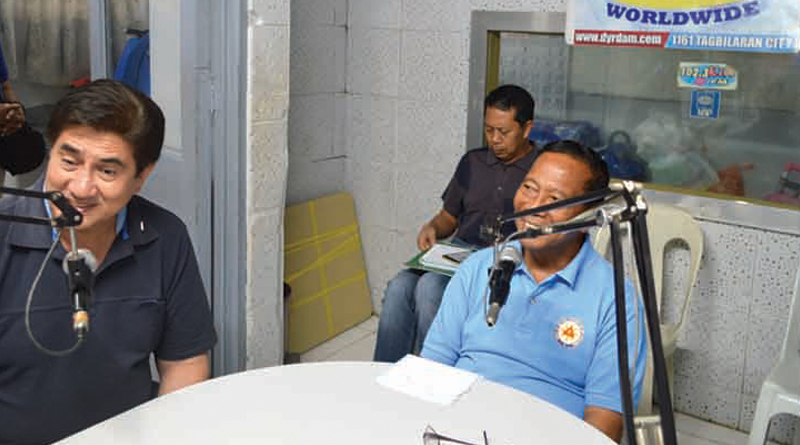 With less than three weeks before the start of the official 90-day national campaign on February 9, 2016, Vice President Jejomar Binay hit the campaign trail anew in Bohol together with his running mate, Senator Gringo Honasan of the United Nationalist Alliance (UNA).

Binay, UNA presidential standard bearer and Honasan, his vice presidential bet dropped by Station DYRD straight from the City Airport shortly before noontime yesterdayÂ  for an interview before proceeding to Barangay Ilahud, Inabanga to meet with sectoral groups, political leaders and residents. He capped his town sorties yesterday in the municipalities of Carmen and Danao. He will fly to Cebu this morning to attend the opening of the 51st International Eucharistic Congress. The presidential bet will be back in the province tomorrow to visit the town of Corella and other nearby municipalities.

A highly placed source toldÂ The ChronicleÂ that Binay will visit several towns during his two-day Bohol sortie amid political forecast that the administrationâ€™s Liberal Party (LP) is poised for a landslide victory in Bohol with presidential bet Mar Roxas and running mate Leni Robredo.

Meanwhile, Binay who is back on top of the latest Social Weather Station and Pulse Asia surveys expressed sadness over the plight of Social Security System (SSS) pensioners whose pension increase was vetoed by President Aquino.

â€œWhy were their hopes raised over the P2,000 pension hike just to be vetoed by the President?â€ Binay laments.

â€œThis is a question of poor legislative-executive coordination. The House and the Senate went through a lot of discussion just for a veto.â€

Binay told DYRD that the present pension has been eroded by inflation and is in dire need of an increase but without the corresponding contribution increase.

Both Binay and Honasan admitted that Aquino as president has prerogatives and they were giving him the benefit of the doubt and has access to information.

But Honasan pointed out that this is a right of life issue saying “the pensioner’s medical needs, food and those with disabilities cannot wait while the SSS quibbles on their financial status.

“The government is tasked to spend not to save. During my administration as Makati Mayor I was willing to borrow just to improve the living conditions of our constituents especially in the areas of health and education”.

Binay chided the administration for basking under a glowing credit rating that was for the purpose of debt service and laid the blame on the Department of Budget and Management (DBM) for the slow release of funds intended for infrastructure and social services.

“We have the financial resources. We are awash with money not spent. If elected president and the money is still there I will increase the salaries of teachers and our medical personnel”.

Binay also took aim at the economy lambasting the administration for leaving out the majority from the benefits of a good economy.

Binay admitted that our economy is doing good but ” the poor are getting very poor while the present rich turning into millionaires. There is no such thing as inclusive growth only exclusive growth”.