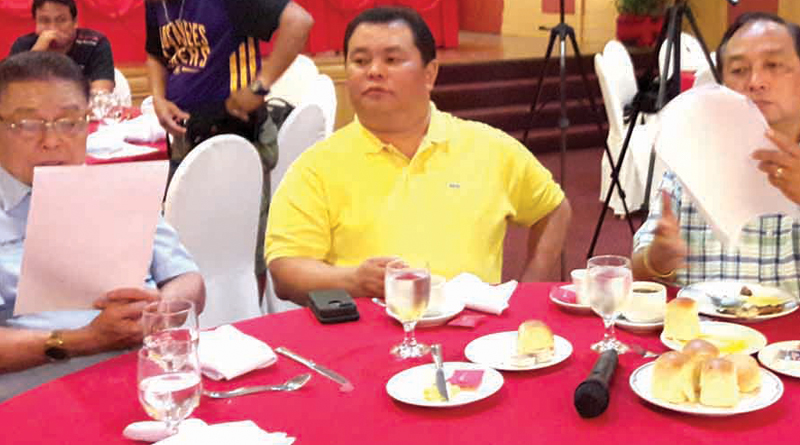 After 15 long years, the Sandiganbayan finally dismissed the most high profile corruption case in the annals of Bohol’s history.

Citing excessive delays that trampled on the constitutional rights of the accused to a speedy disposition of their case, the Sandiganbayanâ€™s First Division junked the 15-year old graft case involving top provincial officials after the tribunal was convinced that the Office of the Ombudsman â€œincurred inordinate and unjustified delay in the conduct of the preliminary investigation.â€.

â€œHaving settled the threshold issue, the court finds it unnecessary to discuss the other issues,â€ the graft court stressed in a 6-page Resolution promulgated on January 21, 2016.

The court also released the bonds posted by the accused for their provisional liberty and lifted and set aside the hold departure orders issued.

The six page resolution rested on grounds that had nothing to do with the accusation that a joint venture agreement entered into by the accused and a private power and water consortium were “manifestly and grossly disadvantageous to the government”.

At issue was the sale to a consortium, allegedly under a rigged bidding, of two provincial government owned public utilities – light and water “in the amount of P150 million only or about ten percent of the appraised valuation of P1.48 billion”.

The resolution was, rather anchored exclusively on the constitutional rights of the accused to a speedy disposition of their case or the judicial saying or maxim, “justice delayed is justice denied”

Section 16 of the 1987 Philippine Constitution states that “All persons shall have the right to a speedy disposition of their cases before all judicial, quasi-judicial or administrative bodies”.

Atty. Lord “Popot” Marapao, lV, legal spokesman and counsel of Relampagos told Bohol media during yesterday’s breakfast press conference at the Metro Center HotelÂ  that “all issues pertaining to the Salcon project or contract has been laid to rest”.

A substantial right, as defined by the Legal Dictionary is an important or essential right that merits enforcement or protection by the law.

The OMB, according to the resolution took fifteen long years to conclude the preliminary investigation from the time the criminal complaint was filed on October 25, 2000 and terminated only on October 23, 2015 with the filing of the information before the SB.

The court, in the span of fifteen years could not find any “intervening event” that will excuse the OMB to “stretch the proceedings to such unreasonable length” even as the prosecution “has not even offered a plausible explanation for the delay”.

The SB rebuffed the argument of the prosecution that the February 22, 2001 Resolution dismissing the complaint and approved by Acting Deputy Ombudsman Orlando Casimiro has not attained finality.

The OMB argued that Casimiro affixed his signature on a photocopy of the resolution and was not attached to the complete original case records.

Casimiro, the OMB alleged was not duly designated as Acting Ombudsman and authorized to sign decisions and resolutions dismissing complaints.

But the SB brushed off the OMB’s assertions as “inconceivable” since the bases for reversing itself did not involve “difficult questions of law or complicated facts needing five years to answer”.

The SB also found unthinkable that the OMB “needed five years just to realize that Acting Deputy Ombudsman Casimiro was not “supposedly authorized” to sign decisions and resolutions dismissing complaints.

The SB also empathizedÂ  with the accused for sensibly believing that the complaint against them was already terminated in 2008.
“It is ludicrous to expect from the accused to assume that they could not rest on that dismissal despite the lack of further challenge and the lapse of years”.

According to the SB, there was no motion for reconsideration or other actions filed assailing the dismissal of the complaint.

Complainants and respondents alike expressed disbelief upon receiving the Ombudsman resolution signed by Ombudsman Conchita Carpio Morales on August 22, 2014 finding probable cause to file charges based on a complaint that both parties believed was dismissed.

Relampagos who was then the Governor conceptualize a bold plan to bring in needed capital and technology to improve the power and water delivery system in Tagbilaran City.

On August 28, 2000, Relampagos signed in behalf of the Provincial Government of Bohol, the first major privatization initiative of a local government unit involving a joint venture between a local government and a private investor covering power and water utilities.

Recalling the events that cost him a reversal of political fortunes, Relampagos told Bohol media “AllÂ  I can say is faith works. Faith in our justice system and, more importantly, faith that what we did for Bohol in the year 2000, when I was Governor, was right all along”.

“I have been in the public service most of my life. My track record has always been that of transparency, accountability and excellence. It have been, and will always be, my commitment, to give only the best for Bohol and my fellow Boholanos”.

For his part, Chatto who was then the Vice Governor and Presiding Officer of the Sangguniang Panlalawigan said “the decision to go for a joint venture agreement with Salcon was anchored on the improvement of the electric and water distribution system”

“For the past 15 years, compared before the joint venture agreement, I think that our people will agree that the service now is far, far better”.

Co accused former Provincial Atty. Inocentes Lopez, former Board Members Arnold Lungay, Eufracio Mascarinas and Exequiel Madrinan are expectedÂ  to file their respective motions before the SB for dismissal of their case.

With the SB agreeing with the accused that the preliminary investigation of the graft case was attended by “capricious, vexatious, oppressive and unjustified delay” violative of their constitutional right to speedy disposition of cases, the celebrated graft case will find closure after 15 years.Â (Chito M. Visarra)Â