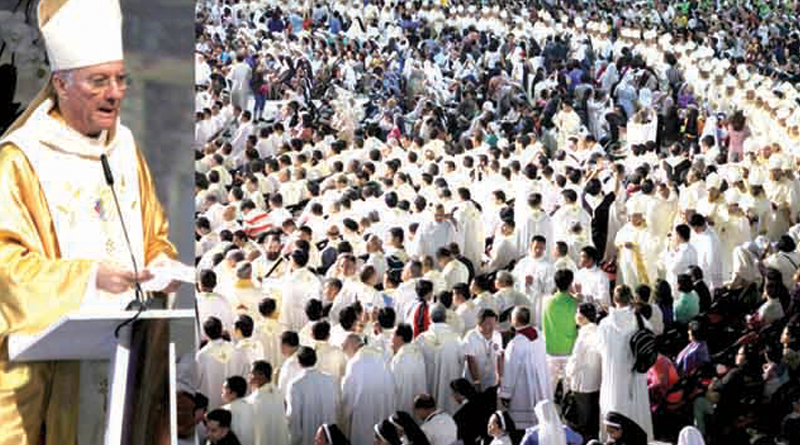 CEBU CITY. -Â  The holding of the 5th International Eucharistic Congress (IEC) manifests Â a major significance since the love of Eucharist transcends into the various social concerns such as hunger, poverty and human rights.

This was the point stressed by Boholano Archbishop Bernardito Auza, Vatican’s top diplomat at the United Nations in New York who attended the IEC with “full of joy and inspiration of the various reflections” heard during the weeklong congress.

“I feel I am still in the United Nations” as the topics discussed evolving around the Eucharist still touched on basic concerns of the flock, Auza said when interviewed byÂ Vatican Radiocorrespondent Patrick Lovett. Topics on hunger, poverty, human rights and environment were among the concernsÂ  discussed during the congress.

Auza who hails from Talibon, Bohol is Holy See’s permanent observer at the United Nations in New York. He came home to the province July last year to receive the citation as one of The Outstanding Boholanos Around the World (TOBAW 2016).

The archbishop said the presence of the Pope in the United Nations is to bring the Church as part of it since there is “so much to bring to the international community.”

He likewise cited the importance of the Eucharist as seen with the presence of the Adoration Chapel open 24 hours in most churches.

“The Eucharist is the summit of love and of the spiritual life ” Archbishop Auza said as the Holy See wants people to be useful to others, and not become selfish to their own personal lives.

The top Vatican diplomat was proud to mention of his roots in Talibon, Bohol citing that the cradle of Christianity in the country is in Cebu and Bohol where the Spanish expedition landed in 1565.