Campaign for nat’l bets on 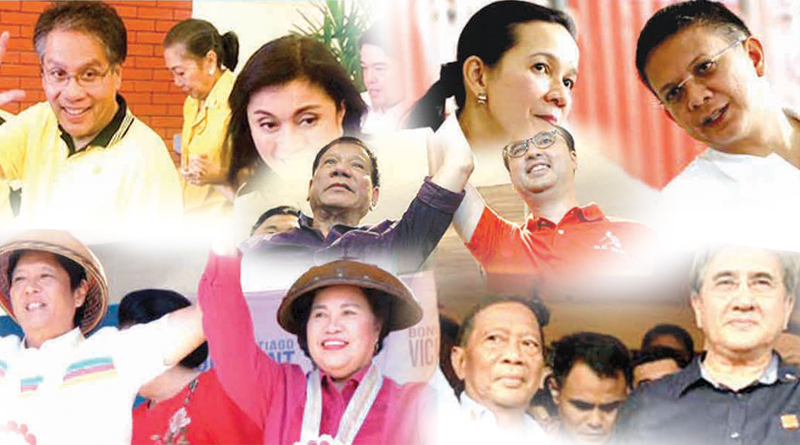 Campaign for nat’l bets on

Five key Philippine presidential candidates, including a crime-busting mayor and an adopted daughter of movie stars, have launched yesterdayÂ  their respective campaigns to startÂ  a 90-day trail for the coming May national and local elections.

Meanwhile, the campaign for local candidates will still commence on March 25.

From Manila’s slums to the countryside, the candidates competed yesterday to captivate the Filipinos at the start of the three-month campaign, promising to cure the same ailments that have hounded the nation for decades: widespread poverty, corruption, crime and insurgencies.

The leading candidates who kicked off their campaign trails yesterday were Sen. Grace Poe, the adopted daughter of the late Fernado Poe who lost in a presidential election,Â  Vice President Jejomar Binay, former Interior Secretary Mar Roxas, who has been endorsed by the President Aquino, Davao Mayor Rodrigo Duterte, known for his tough anti-crime campaignÂ  and Sen. Miriam Defensor-Santiago.

Poe together with running mate Senator Chiz Escuero caught the bigger limelight when they launched their trail at the historic Plaza Miranda which used to be biggest area for political rallies.Â  Vice President Binay and running mate, Sen. Gringo Honasan kicked off at the Welfare Ville in Mandaluyong City while Davao Mayor Duterte and Senator Allan Peter Cayetano were Duterte’s bailiwick in Davao City,

Administration bet Roxas and running mate, Rep. Leni Robredo flew to Roxas’ home province of Capiz to make a grand launching with Pres. Aquino and a huge entourage of LP officials and supporters

Sen. Miriam Defensor Santiago and Senator Ferdinand “Bongbong” Marcos went up north to Batac, Ilocus to place on record that they still have their command vote in the North.

With the colorful launching activities of their respective campaign trail, the 90-day campaign period for national candidates officially started yesterday with a call from the Commission on Elections (Comelec) to avoid committing three mortal sins in campaigning.

According to Comelec Chairman Andres Bautista, the past few months have seen election propaganda sprouting on the streets that are already considered unlawful starting today.

â€œThe difference now? Their meter starts running in respect to their campaign expenditures. Campaign advertisements and paraphernalia will now be counted,â€ he said.

Bautista said that candidates and parties should make sure that they spend within the campaign spending limits. Otherwise, they will face election offense charges.

The Comelecâ€™s Campaign Finance Office will monitor campaign advertisements and paraphernalia to make sure that they do not exceed the allowed amounts.

He said that candidates and parties should also avoid committing three â€œmortal sinsâ€ against â€œclean and green campaign.â€

These are posting of campaign materials outside of common poster areas, especially on trees and plants; excessive use of plastic and other unrecycable materials; and irresponsible disposal of campaign.

Based on the Comelecâ€™s Calendar of Activities for the May 9 elections, the campaign period for national bets runs from Feb. 9 to May 7 while it will be from March 25 to May 7 for local candidates.

Under Comelec Resolution No. 10049, the campaign spending limits for the following candidates are as follows:

Candidates for president and Vice president: P10 for every registered voter

For other candidates: P3 for every voter currently registered in the constituency where candidates filed their certificate of candidacy

For candidates without political party and without support from any political party: P5 for every voter currently registered in the constituency where the candidate filed his certificate of candidacy

For political parties and party-list groups: P5 for every voter currently registered in the constituency or constituencies where it has official candidates

There are 55.7 million registered voters from the coming elections, including 1.4 million overseas absentee voters.

The resolution also states that considered as lawful campaign materials are pamphlets, leaflets, stickers, or other printed materials not exceeding 8Â½ by 14; handwritten or printed letters; posters made of cloth, paper, cardboard not exceeding 2 by 3 feet; streamers not bigger than 3 by 8 feet at the site of public rallies; mobile units and vehicle used in motorcades; and paid advertisements in print or broadcast media.

The Comelec guidelines state that the prohibited forms of election propaganda materials include newspaper, newsletter,Â newsweekly, gazette or magazine advertising, pamphlet, leaflet, card, decal, bumper sticker,Â poster, comic book, circular, handbill, streamer, sample list of candidates or any published or printed political matter and to air or broadcast any election propaganda or political advertisementÂ by television or radio or on the Internet forÂ or against a candidate or group ofÂ candidates to any public office, unless they bear and be identified by the reasonably legible, or audible words â€œpolitical advertisement paid forâ€ followed by the true and correct name and address of the candidate or partyÂ for whose benefit the election propaganda was printed or aired.

All campaign materials donated for a particular candidate cannot be printed, published, or broadcast unless they are accompanied by a written acceptance by the said candidate or party, the Comelec said.
The resolution shows that it is deemed illegal to post, display, or exhibit any election campaign or propaganda material outside of authorized common poster areas, in public places, or inÂ private properties without the consent of the owner.

Pedestrian overpasses and underpasses, flyovers, and underpasses, bridges, main thoroughfares, center islands of roads and highways; schools, shrines, barangay halls, health centers, public structures,Â and buildings or any edifice; public transport vehicles owned and controlled by the government, such as the Metro Rail Transit (MRT), Light Rail Transit (LRT), and Philippine National Railway (PNR) trains; and within the premises of public transport terminals, such as bus terminals, airports, seaports, docks, piers, train stations that are owned and controlled by the government.

The Comelec said they are also allowed not more than a total of 120 minutes of television advertising, on a per stationÂ basis, whether appearing on national, regional, orÂ local, free or cableÂ television, and 180 minutes of radio advertising, on aÂ perÂ station basis, whether airing on national, regional,Â or local radio, whether by purchaseÂ or donation.

Candidates and registeredÂ political parties for a localÂ elective position, are limited to a total of 60 minutesÂ of television advertising, on a per station basis,Â whether appearing on national, regional, or local,Â free or cable television, and 90 minutes ofÂ radio advertising, on a per station basis, whetherÂ airing on national, regional, or local radio, whetherÂ by purchase or donation.

The resolution shows that published or printed campaign materials shall not exceed a maximum size of Â¼ page in broadsheets and Â½ page in tabloids but not more than three times a week per newspaper or magazine.

For online propaganda materials, the corresponding maximum sizes for every type of advertisements shall range from 88 by 31 per pixels to 720 by 300 per pixels but shown not more than three times a week per website.

Campaign violations are considered an election offense punishable with one to six years imprisonment, removal of right to vote, and disqualification from holding public office.