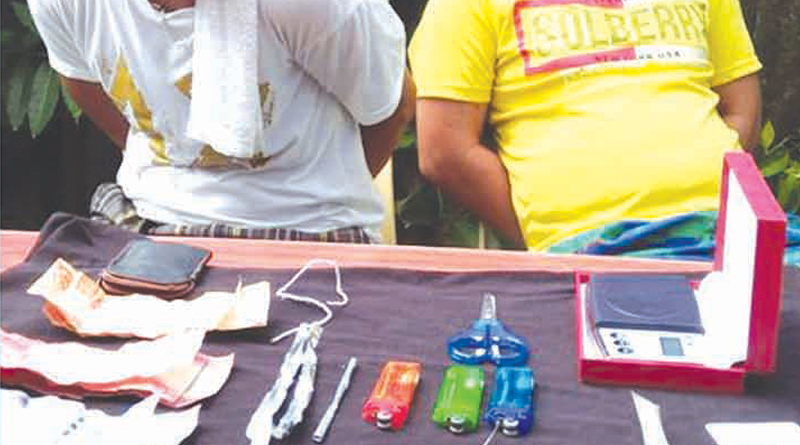 A drug den right in the Poblacion area of the city turned out to be under the management of a barangay kagawad of Candabid, Maribojoc.

This surprised the City Anti-Illegal Drugs Special Operations Task Group (CAIDSOTG) of the city police in a recent operation along M. Paras St. in Poblacion 3, Tagbilaran City where a certain Emerlito Bastasa, later confirmed as a barangay kagawad of Candabid in the town of Maribojoc, had been caught manning a house allegedly utilized as a drug den.

The CAIDSOTG team arrested Bastasa together with the owner of the house, identified as Roberto Amado—also known as Boy Ted—during a buy-bust operation at around 3:45 p.m. yesterday.

The CAIDSOTG team confiscatedÂ three large packs of shabu seen in plain view on a small table house after the buy-bust.

Other items recovered during the operation included the 500-peso bill marked money, cash amounting to P390 in different denominations, and drug paraphernalia.

If estimated at 5 grams per large pack, the three large packs must have weigned 15 grams with an estimated total value of P45,000, according to authorities.

According to city chief of police, PSupt. George Vale, they already conducted a buy-bust operation a few days ago against Amado, but it was Bastasa who handed the sachet of shabu that the police asset purchased that day.

Since the subject was Amado—who was the one transacting with the police asset, it was considered a failed operation.

They conducted another operation yesterday wherein Amado, whom the police asset had transacted, handed the sachet of shabu to the poseur buyer.

However, the police team had to wait because Amado left the house when they arrived. The police asset purchased again when Amado, the one he had transacted, returned and handed the pack of shabu himself.

When the cops attempted to arrest Amado, the latter ran to the inner part of the house and it was there that they cornered him.

Inside the house, the cops saw Bastasa next to the table where the three large packs of shabu and drug paraphernalia where placed. They also arrested Bastasa.

Bastasa denied selling drugs, explaining that he just worked as a cook for Bastasa and was just there for a pot session.

The two-room building is located just beside a main house.

Vale said a patron would just have to knock twice on the door and the one inside would turn the cover on a small hole to slip the shabu through it.

He further described that upon entering the house, the view of the first compartment that met them was sort of a small living room where the patrons would supposedly have pot sessions. It leads to another room that serves as a bedroom.

Vale initially believed Bastasa must have served as courier of shabu for Amado.

Baseleres had earlier been arrested for drugs and had been charged for a drug case, and his arrest last Saturday was his second.

The recent raid was conducted based on a search warrant issued by Judge Solever Peras of the Regional Trial Court Branch 10 in Cebu.

The raiding team composed of the Cebuâ€™s Criminal Investigation and Detection Group, personnel of the Tagbilaran City Police and the Philippines Drug Enforcement Agency confiscated five sachets of shabu and several drug paraphernalia during the operation.

However, Baseleres denied that the sachets of shabu seized during the operation belonged to him.