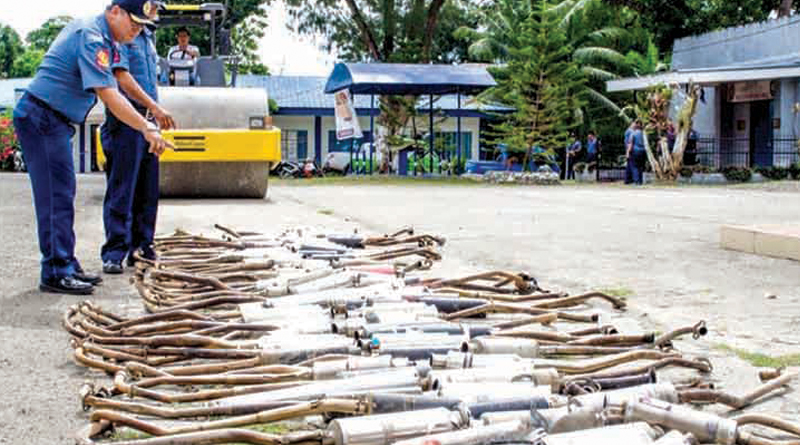 The first batch of improvised mufflers from confiscated motorcycles over the first round of a five-day operation of Oplan ATOM (Aggressive Traffic Operation Management) were crushed by a road roller in the presence of the Philippine National Police regional director.

PNP-7 Regional Director Manuel Gaerlan personally supervised the crushing of the improvised mufflers confiscated in Tagbilaran City during the first five days of the campaign against loud mufflers.

A total of 126 loud mufflers or improvised mufflers of motorcycles were confiscated by the Task Force Alimpos of the Bohol Police Provincial Office (BPPO) during the period.

The road roller had to run six times on the mufflers which proved to be that hard.

According to PSInsp. Roland Desiree Lavisto, each original improvised muffler costs P6,000, while the home-made mufflers is pegged at P2,000.

Gaerlan commended Agustin for launching the massive campaign against loud mufflers that cause public disturbance and had been the subject of complaints.

After the crushing of the confiscated mufflers at Camp Dagohoy, the police officials proceeded to the Peopleâ€™s Mansion for a press conference.

Gaerlan had an opportunity during the press conference to commend the BPPO for bringing results in the aggressive campaign against illegal drugs and all forms of criminalities.

Gaerlan also shared that like the cops in Bohol, Cebu cops also made results in the One Time-Big Time campaign.

He said his predecessor, PoliceÂ Chief Supt. Prudencio Tom BaÃ±as, started it and they are stepping it up to sustain the momentum.

The aggressive anti-illegal drugs campaign now inches on another level of the challenge by plucking out suspected drug protectors that had penetrated the police organization.

Gaerlan assured Agustin that his leadership will always support the local police in the campaign.