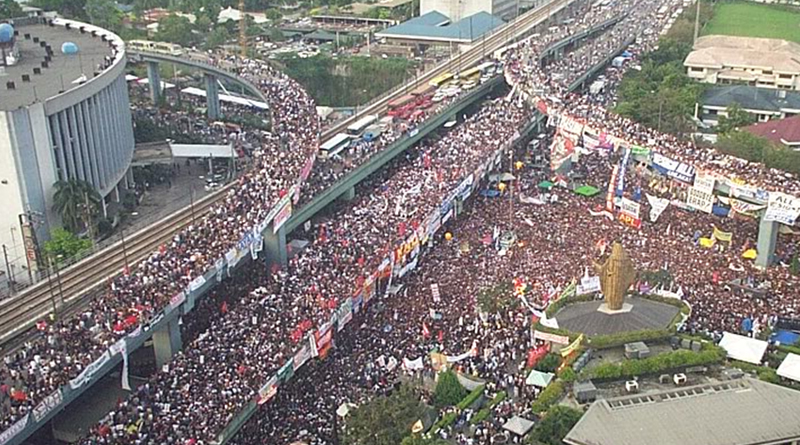 MANILA, Feb. 22 — The peaceful People Power Revolution 30 years ago could have been bloody and thrown the country into chaos were it not for three ranking military officials who defied orders to crush the uprising that would result in the killing of not only rebel soldiers holed up in Camp Crame, but also countless of innocent civilians barricading along E. Delos Santos Avenue (EDSA) in Quezon City.

Ermita made the revelation during an exclusive interview with this writer at the sideline of the launching of former President Ramosâ€™ latest book: â€œ2030: ONE WORLD, ONE COMMUNTY, ONE FAMILY,â€ at the Kamuning Bakery CafÃ©â€™ in Quezon City last Friday.

The millions of Filipino people who went to EDSA 1 believed that the hand of God prevented a bloodshed of unimaginable proportion had a gunshot was fired by either side. Incredible but there was none. Indeed it was a miracle!Tadiar was leading a column of Armored Landing Tank Vehicles (LTVs) and Armored Personnel Carriers (APCs) and Philippine Marine troopers proceeding towards Camp Crame when they were blocked by thousands of civilians on Ortigas Avenue.

The tanks threatened to mow down the people blocking their way if the huge crowd would not clear the way, but the civilians stood path. Many of them lifted the rosaries and crucifixes they were carrying for the soldiers to see, then knelt on the middle of EDSA.

Tadiar pleaded to let them pass but the people remained undaunted. A decorated Marine soldier, who fought many battles in Mindanao, Tadiar came to a painful decision when he ordered his troops to stand down.

The expected blitzkrieg assault on the rebel soldiers never took place as the Marines found themselves in a light brotherly embrace with the civilians who blocked their path and the troops returned to their barracks.

Another act of heroism at EDSA â€™86 was shown by another Marine officer, then Col. Braulio Balbas, who was the commander of an artillery battery, who established his unit at the golf course of Camp Aguinaldo, just across Camp Crame.

Balbas’ mission was to fire the deadly 105mm cannons at Camp Crame where the rebel soldiers were camped.

When Balbas finally got an order to fire, he made an alibi that he was still positioning the howitzers. It was the only instance in his entire military career that he defied an order from his superior. Then he defected to the rebel camp and did not regret his decision.

Balbas later confessed that his conscience would not allow him to annihilate his comrades-in-arms and innocent civilians. On Feb. 24, the third day of the EDSA â€™86 uprising, another group of military officers and men, the famed 15th Strike Wing of the Philippine Air Force (PAF), led by Col. Antonio Sotelo, instead of bombing Camp Crame as ordered, defected, tilting farther the balance of firepower to the side of the Enrile-Ramos camp.

Sotelo and his men were aboard Sikorsky and UH1-H â€œHueyâ€ helicopter gunships circling above Camp Crame when they defected by landing their choppers in Camp Crame.

While circling above, the huge crowd at EDSA watched tensely in fear, whether the gunships would fire their air-to-surface rockets and M60 machines.

The crowd cheered as the gunships landed one by one, without firing their armaments.

â€œWe followed our conscience. I think I have not really done much in my life. For once, I wanted to make a decision for my country,â€ Sotelo said.

Then two PAF F-5 fighter jets thundered overhead. The people craned their necks to get a glimpse of the supersonic planes. It also turned out that the F-5s were piloted by friendly forces siding with the military rebels to confirm that the entire 5th Fighter Wing of the Air Force had defected.

Two other Sikorsky helicopter gunships proceeded to Malaca?ang and attacked the Presidential Palace with air-to-ground rockets. The first chopper fired a pair of rockets, followed by .50 caliber machine gun fire.

The second also did the same. Each time a rocket hit its target, the ground shook.

This writer witnessed the helicopter attacks on MalacaÃ±ang from the Philippines News Agencyâ€™s office at the National Press Club in Intramuros, Manila that day. Recalling that four-day EDSA uprising, Ermita said that definitely there was Divine intervention during the four-day historic event that freed the country from oppression when then President Ferdinand Marcos and family fled the country after 20 years of rule.

Ermita also paid glowing tribute to the role of the alumni of the Philippine Military Academy (PMA) of which he is a member of class 1957, in uniting the Armed Forces at the most crucial times of the countryâ€™s history, especially the coup attempts that followed, otherwise, the country would be in chaos and divided.