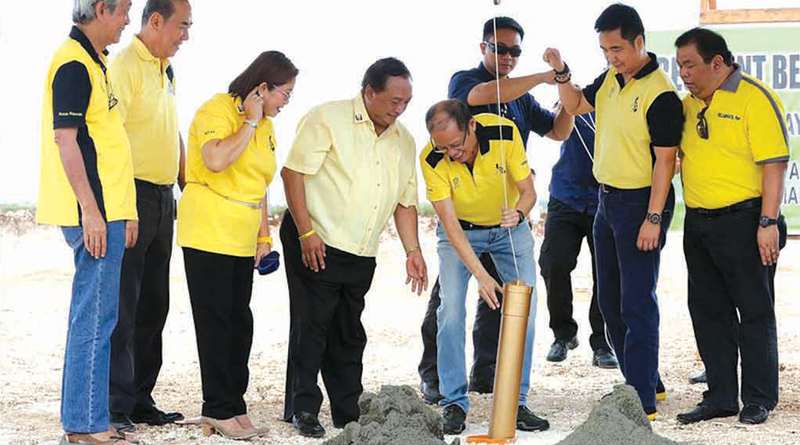 No less than President Benigno S. Aquino III has committed that the New Bohol now undergoing ground works in Panglao will be completed by Christmas of next year.

This commitment issuedГ‚В  by Pres. Aquino surprised some sectors since an earlier advisory said the P7.2 Billion airport can be completed in 30 months or somewhere in the middle or last quarter of 2018.

But, the time capsule which the President himself dropped last Wednesday at the site showed the completion time of the project.

The project which started work June last yearГ‚В  was bidded out to Mitsubishi Corp. and Chiyoda Corp and subcontracted by EEI Engineering.Г‚В  The Japan International Cooperation Agency (JICA) conducted the bidding in Manila where the two reputable Japanese firms won the bid.

In his speech, the President was in high spirit to forecast the tourism boom here once the new Bohol Airport is completed.Г‚В  The project started during the time of the late Pres. Cory Aquino of which the DOTC secretary then was former Bohol Gov. Constancio “Nonoy” Torralba.

The project has long been delayed passing through the terms of former presidents Fidel Ramos, Joseph Estrada and Gloria Macapagal Arroyo.

Now that the new Bohol Airport has started its construction July last year, more investors in tourism related businessesГ‚В  will mushroom in the province. In fact, even as early as now, big time resort players opened Hennan (Panglao) with 400 rooms and Be Resort’s 200 rooms as among the latest to open.

The new Bohol Airport, according to Pres. Aquino has 2,000 meter runway built on international standard.

The president Г‚В also did the ceremonial switch-on for the on-going electrification of additional 2,684 sitios in Central Visayas.

They then converged with Liberal Party (LP) bets for president Mar Roxas, vice president Leni Robredo and senators at the capacity-filled Bohol Cultural Center in Tagbilaran City where Aquino rallied the Boholanos to support the Daang Matuwid slate.

Before the proclamation rally in the provincial capital, the team did a multi-sectoral gathering in Talibon, a consultation with a cooperative of loomweavers in Tubigon and a visit to a rising informal resettlement in Cortes.

Roxas is a former secretary of the Department of Trade and Industry (DTI), which financially and technically assisted the peopleГўв‚¬в„ўs enterprise and livelihood under its Shared Service Facility (SSF) Program and Export Pathways Program (EPP).

Robredo promised to promote and enhance the competitiveness of native handicrafts, noticing that the loomweavers use raw materials like buri and abaca from her own province, Camarines Sur, of which she is an incumbent congresswoman.

Also then a senator and Department of Interior and Local Government (DILG) secretary, RoxasГўв‚¬в„ў Г‚В moved away from hazards and insecurities and provided homes to over 18,100 informal settler families.

RobredoГўв‚¬в„ўs husband is the late DILG Sec. Jesse Robredo, the father of the countryГўв‚¬в„ўs Гўв‚¬Е“sealsГўв‚¬Вќ of in the seals Г‚В of integrity and competence in local governance.

Anointed by Aquino to continue and expand the Гўв‚¬Е“straight path,Гўв‚¬Вќ Roxas is also a former secretary of the Department of Transportation and Communications (DOTC) which is the national implementing agency of the Panglao airport project now under Secretary Jun Abaya.

Before the capsule-laying rites in Panglao, the president gazed at the surrounding of the sprawling airport site, was visibly pleased at the fast Г‚В progress awaiting the Boholanos.

The energy secretary came along with the president for the regional sitio energization program.

The” loveless” president foresaw himself someday coming again to Bohol through its new airport not just as a tourist but hopefully in a Гўв‚¬Е“honeymoon on Loboc River cruiseГўв‚¬Вќ at night with Гўв‚¬Е“firefliesГўв‚¬Вќ as mute, glowing witnesses.

Reported to have once dated the now Filipina Miss Universe Pia Alonso Wurtzbach, Aquino is reputed to be the PhilippinesГўв‚¬в„ў only unmarried sitting president.

At least for now, Aquino and the worldГўв‚¬в„ўs prettiest who is Гўв‚¬Е“confidently beautiful with a heartГўв‚¬Вќ may not be destined for each other.

The fulfilment of the Panglao airport dream is itself personally sentimental to Aquino even if he repeatedly cited Chatto and Relampagos without Г‚В whose leadership qualities his administration would not have hastened developmen support..

The Г‚В feasibility study for the airport, considered the biggest singular infrastructure project of large Г‚В multiple impact on Bohol development and growth, was conceived during the presidency of his mother, the late Cory Aquino.

The projected tourism boom as a consequence of the operation of the airport of international standard is further expected to generate many Г‚В million jobs as it surely affects numerous other industries including agriculture that complements with tourism.

In rallying for Г‚В support for the Roxas-Robredo team and the Г‚В leadership of Chatto and Vice Gov. Concepcion Lim in Bohol, Aquino asserted that the best to do for the country and the province is continue the track of Daang Matuwid.

Already P19 billion worth of projects and programs have gone to Bohol in his term, way above the average of P12 billion for individual provinces across the country.

Among these are the Pantawid Pamilyang Pilipino Program (4Ps)Г‚В which Bohol beneficiaries have now grown to 59,222 and the expanded Philhealth now covering 1.2 million Boholanos.

The president recalled theГ‚В sacrifices and great efforts of emergency responses, relief operations, restoration of roads, bridges, electricity and local government infrastructure, among others, in the aftermath of the strong earthquake and other major calamities.

He also recounted the only seven percent (7%) left of the national budget when he assumed president, yet has since able to pave 6,200 kilometers (kms) of national roads, 1,700 kms of farm-to-market roads and 3,500 kms of tourism roads.

The Daang Matuwid has already added 66,000 classrooms being constructed, plus over 180,000 classrooms to be completed this year, and more will rise nationwide under the Roxas-Robredo leadership and, in Bohol, the Chatto-Lim tandem.

Another highlight of the presidentГўв‚¬в„ўs visit was the groundbreaking for the imposing new Bohol provincial capitol complex, which construction starts this year.

But because he had to fly back to the national capital, Aquino was represented by Drilon in the ceremony led by the governor.

The existing old capitol building, a heritage structure, is currently restored with national funding for conversion into a national museum in Bohol after its damage by the unforgiving earthquake.

To rise on the site of the abandoned Bohol Detention and Rehabilitation Center (BDRC) beside the Hall of Justice, the new capitol project is integrated with road widening and upgrading, including the elevation of the low portions of the access roads.

The new Bohol government center can cost over P700 million under a multi-year obligation authority already secured from the national government, including the initial P350 million in the bag.

Bohol Г‚В has been cited to be the first and only province in the country so far to implement the JobStart Philippines Program.

Two days before the presidentГўв‚¬в„ўs visit, the program was formally introduced during the Employers Forum and Consultation conducted by the GovernorГўв‚¬в„ўs Office-Bohol Employment and Placement Office (GO-BEPO) and Provincial Public Employment Service Office (PESO) in coordination with the Department of Labor and Employment (DOLE).

DOLE Sec. Rosalinda Baldoz personally congratulated the province for strong interest and supporting the rollout implementation of the program as he confirmed Bohol to be the first to execute it in the country.

The JobStart is an employment facilitation initiative of DOLE with fund support from the Canadian government and technical assistance from the Asian Development Bank (ADB).

It assists young Boholanos to enhance their knowledge and skills in formal education or technical training for them to be more responsive to the demands of the labor markets.

More access to jobs is another governance platform to be vigorously and genuinely pursued by the Daan Matuwid leadership, Roxas and Robredo vowed.

It was Roxas as then DTI secretary who harnessed the Philippine potential in the global information technology-business process outsourcing (IT-BPO) industry, which created 1.04 million jobs and contributed $18 billion to the countryГўв‚¬в„ўs economy in 2014 alone.

LP candidate Г‚В Chatto himself rallied the Boholanos to solidly support the Roxas-Robredo tandem because the workings of Daang Matuiwd have been consistently doing good Г‚В as begun by Aquino.

It was AquinoГўв‚¬в„ўs sixth presidential Bohol visit but probably not his last before he steps down as Chatto expected the full Roxas-Robredo team in a penultimate grand camap here late this April or a week to the May elections.Г‚В (with report of Ven rebo Arigo)

Damage: P312MГ‚В PAGASA: Worst El NiГѓВ±o ever The province of Bohol was declared ThursdayГ‚В under a State of Calamity due to mounting…