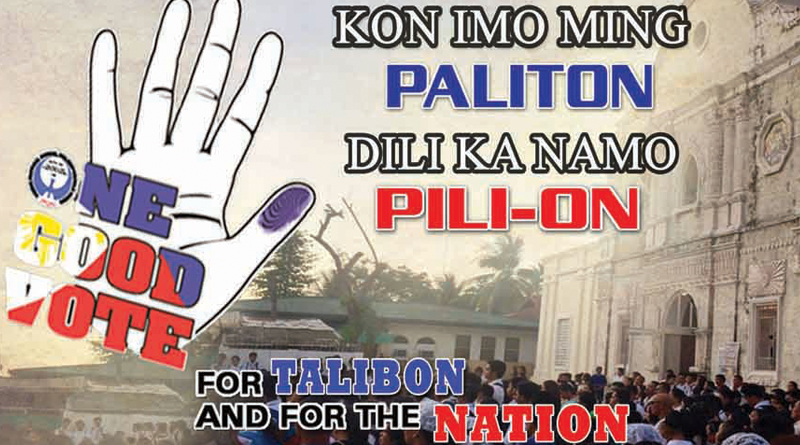 The Church will embark on an ambitious advocacy to stop vote buying in the coming national and local elections where money from candidates are expected to flow to buy the electorate’s votes.

The all-time cry to stop vote buying has not been heard down to the grassroots level until this serious move will be launched today by the Diocese of Talibon headed by Bishop Patrick Daniel Parcon, D.D.

A well organized movement calledÂ  “Diocesan Action Moving towards Good Governance (DAMGGO) generated support from well meaning citizens in Talibon town where the seat of the diocese is located. The group composed of representatives from the cross-section of the community declared their being non-partisan in the coming polls while advocating a serious fight against “evil practices” in politics which are common during elections.

Today’s launching came barely 14 days before the start of the campaign for local officials which falls on Good Friday, thus is expected to automatically commence on Easter Sunday.

The diocesan wide campaign against vote buying, if proven effective, is expected to affect some 450,000 Â voters in the towns under the Diocese of Talibon.

Msgr. Alberto “Abet” Uy, administrator of the Cathedral in Talibon toldÂ The Chroniclethat the newly organized movement will carry the theme “One Good Vote” in their diocesan wide campaign.

The launching activity will see streamers and t-shirts of participants saying their official slogan which isÂ â€œKon imo ming paliton, dili ka namo pili-on!â€ (If you try to buy our votes, we are not going to vote for you!).

“There’s a lot of immoral practices in the political arena, but the most evident and most corrupt is vote buying,” Msgr. Uy stressed thus the campaign wants to “bring back morality to politics by asking the people not to sell their votes in the coming election and the candidates not to buy votes.”

The ChronicleÂ learned that DAMGGO after a series of meetings was able to generate the support not just of the Catholic church but other religions as well which is unprecedented in the annals of an anti-vote buying campaign in the province.

The movement is supported not only by religious organizations, movements and lay workers of the Catholic Church bit also by the faithful of other denominations.

“This is not an issue about religion or faith, but between good and evil, light or darkness,” Msgr. Uy stressed.

The grand kick off ceremony is set at 1 o’clock this afternoon with a motorcade to beÂ  participated in by well meaning citizens from the Cathedral grounds in Talibon moving to the neighboring towns of Trinidad and Ubay.

The thematic campaign dubbed as “One Good Vote” encourages voters in the diocese to carefully and prayerfully select the candidates they will vote on the May 9 polls.

“One Good Vote” calls for a well discerned decision on whom to vote, an intelligent vote that is not for sale.

Educating voters and asking them to give their One Good Vote is a challenging task for DAMGGO,â€ Msgr. Uy added.

â€œIt is not easy to ask people not to sell their votes, especially the poor and deprived. But, even in extreme difficulty, the poor is capable of understanding what is right and wrong. We remain hopeful that with the help of God and the cooperation of good-willed citizens, we can change the face of politics in our diocese.

” If we become successful with God’s grace, we can prove to the Boholanos and the Filipinos that the electorate can do it once given the right education and inspiration to get rid of vote buying,” the church official stressed.

Bishop Parcon, for his part said “vote-buying and selling has long been considered by the Church as an offense against the Creator. God created the human race different from animals by giving them reason and free will. When people sell their basic right to choose, they exchange for money their dignity, thereby insulting the Creator. Moreover, vote-buying and selling is also an offense against the law of the Land.”

The diocese cited Comelec Resolution no. 9688 which has ordered the arrest of anyone or group who are caught in the act of buying and selling of votes during elections.

During one of their organization meetings, Msgr. Uy explained further the evils of vote buying by saying â€œIf we allow vote-buying to continue, graft and corruption will always be a big problem. Candidates who spend a lot of money during elections will most likely get their money back once they are in office. How? Through graft and corruption. If vote-buying prevails, elections will remain a question of who is the highest bidder. The moral qualities and competence of candidates will be given less attention or no longer be considered at all. Qualified leaders who are poor will never get the interest to run for office. And who are we depriving of good leaders?”

The diocesan-wide campaign also anchors their crusade on the principle that â€œvote-buying will not give victorious candidates the strong motivation to serve. Who likes to become a servant after having spent a lot of money to get elected? Once in office, a corrupt politician will surely say to himself: â€œWhy should I serve? To get re-elected, I donâ€™t need to serve; only money to buy votes.â€

DAMGGO also believes that the practice of vote-buying is a “bad example to our young people.”Â  In vote-buying and selling, the youths will be made to think that it is normal to buy people and there is no problem in giving self for money. When they get older, they will do the same things to one another.â€