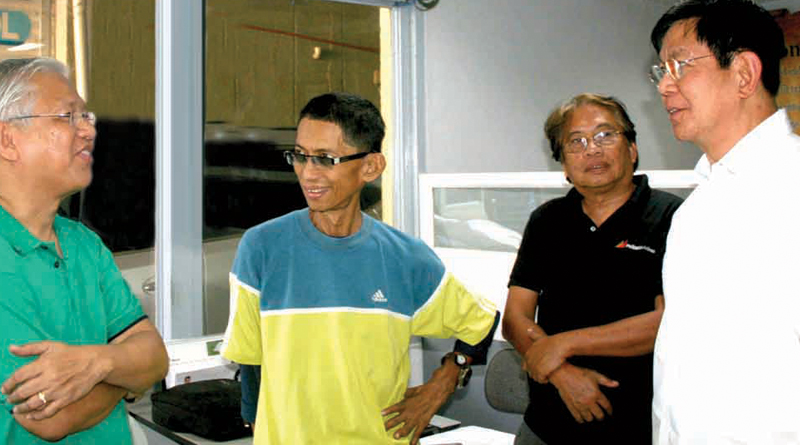 There is unspent fund in the national budget amounting to P703 billion, from the General Appropriations Act (GAA) of 2014 and 2015 which can be utilized to finance the much needed development in the entire country, and not just in the major urban capitals.

This was the shocking revelation made by former Senator Ping Lacson, a known budget expert who has been crusading the fight against graft and corruption in governance.

Lacson breezed into town last Friday meeting the cross section of the Boholanos to espouse his advocacy dubbed as BRAVE or Budget ReformÂ  Advocacy for Village Empowerment.

He met with the board of trustees of the Bohol Chamber of Commerce and Industry, Inc. headed by Engr. Al Uy during a luncheon meeting at the Be Grand Resort last Friday.Â  He expounded on his budget reform advocacy to the town mayors during a meeting convened by Gov. Edgar Chatto at the Bohol Tropics yesterday noon.Â  Lacson also talked with the academe as commencement speaker of the Bohol Institute of Technology while he met with Bishop Leonardo Medroso and some clergy Friday evening. He likewise visitedÂ The ChronicleÂ editorial office to discuss with the editors and writers his budget reform agenda while he went on live interviews over dyRD and Kiss 102.3FM yesterday.

He said with the huge unobligatedÂ  or unutilized fund, the national government should come up with a clear budgetÂ  agenda on how these funds can be appropriated not just in Metro Manila and urban centers but down to the farthest barangays in Mindanao.

Lacson who is running back to the Senate this May categorically said that each barangay, town/city and province can easily propel “inclusive” growth once they be appropriated with the much needed funds coming from theÂ  “unspent funds.”

He clarified that this budgetary outlay once realized is on top of the 20% Internal Revenue Allotment (IRA) presently extended to the local government units.
He urged the government and private sectors to rally behind this much needed budget reform in the country in order to benefit from this unspent billions of pesos.

Asked on how to safeguard the funds against corruption in the LGU level, Lacson said the Commission on Audit (COA) which is known for its fair and objective auditing task be given the legal power to file charges against corrupt local government officials. He said that COA, as of now, is just conducting the pre and post audit showing irregularities committed by the various government agencies. However, COA is not clothed with the mandate to file legal charges against erring government officials and personnel linked in anomalous transactions.

He recommended that with P703 billion available fund, each province can be appropriated with P500 million to P1 billion while every town with P50 to P100 million. To the barangays, the unspent fund can provide each barangay P3 to P5 million. Under this budget reform agenda, the outlay for the LGUs will involve some P483 billion which is still way below on what is available from the two year unspent fund,

Once extended to the LGUs , Lacson said the nation’s economyÂ  will draw firmer domestic demands, efficient production and a more stable consumption of goods and services while no single LGU will be left out.

Lacson who fought against pork barrel of senators and congressmen said he is a believer of empowering the local government units to bring development in this country. He was the only senator who stood to deliver a privilege speech seeking the abolition of the pork barrel. His attempt failed as his colleagues in the Senate ignored his move. Years later, the Napoles pork barrel scandalÂ  blew up revealing that indeed pork barrel is the source of graft in this government.

As a senator, he will find allies in the Senate and in Congress to pass a bill which will implement a major budgetary reform agenda.

He cited figuresÂ  in his budgetary reform agenda lifted from the Philippine Center for Budget Legislation under its president/CEO Joseph Ranola, a renown national budget expert who is a mayoralty bet of Jagna town.

In his meeting the town mayors yesterday, Lacson rallied the town executives to become advocates of this muchÂ  needed budget reform agenda which when given the mandate by the national governance can be instrumental in the development of the countrysides.