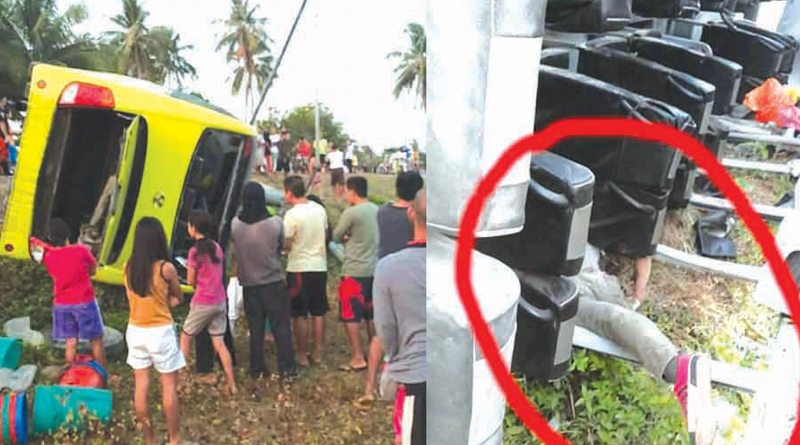 Two other passengers injured in the accident still have to be identified.

Barog died on the spot when pinned by the bus at its side.

The driver, Armand Morales; the conductor, Benjie Mira; and inspector, Monito Aguilo, also sustained injuries and were brought to a hospital in Tagbilaran City for treatment.

The bus turned turtle thrice after a sudden stop while navigating a curve towards a bridge in Tangohay, the boundary barangay between Dimiao and Valencia.

The bus fell into a shallow ravine and landed on its side on a ricefield.

PO2 Rex Gundaya, investigator at Dimiao Police Station said that the driver of the involved Southern Star Bus unit with body number 12126, Morales, admitted he was about to drowse, that might have caused him to lose control on the wheels.

Gundaya noticed, while interrogating Morales, that the latter had some cuts on the right knee.

Gundaya said some of the passengers he had interviewed said the driver even stopped earlier to buy food and told them that it would help keep him awake while driving.

Mira, for his part, told the police investigator that upon reaching the area, the bus first zigzagged before falling into the ravine.

The passengers also told the police investigator that Morales still picked up one passenger in Dimiao area and that they were running on normal speed.

Another Southern Star Bus unit came, together with the TARSIER 117—the provincial governmentâ€™s emergency response team, to rescue the ill-fated bus from the ravine to the road.

From the road, another bus driver of Southern Star Bus Transit drove the ill-fated bus to the police station, indicating that it was still in good condition.

From the police station, Morales was brought to Leona O. Lim Memorial Hospital in Valencia.

Ronald Jumawid of the Holy Name Funeral Home in Valencia branch said Barog was rushed to the Rural Health Unit in Dimiao but was declared dead by the municipal health officer.

From Valencia, Barog was transferred to Holy Name Funeral Home in Tagbilaran City at around 9 a.m. since its Valencia branch has no chapel where the victimâ€™s body could be properly laid.

Jumawid said they had difficulty determining the identity of the victim since there was no ID that could show it.

It was already in Tagbilaran that relatives identified the victim.

The other casualty, Mendez, who was still alive then was first rushed to Dr. Guido Limâ€™s Clinic and Hospital in Valencia and was later referred to GCGMH in Tagbilaran City where he was declared dead on arrival.

Fritzi Labastilla, spokesperson of the Southern Star Bus Transit, Inc., for her part, said that the company will conduct a thorough investigation on the incident, considering that they had already implemented strict workload policy.

Labastilla said Morales was a regular driver and the companyâ€™s policy is that a driver only works for one round trip daily and they have to rest by 3-4 p.m.

Southern Star Bus Transit, Inc. has around 100 buses in Bohol, but they hire more than 100 drivers, the others are relief drivers to take over the regular drivers.

The dispatchers also check that the strict implementation of first in-first out policy, to make sure the drivers have rested enough before returning for work after a round trip.

Labastilla also assured that the company will shoulder the hospital bills of the victims and the company nurse immediately checked all hospitals in Tagbilaran City to see the victims.

The company also extends all the assistance possible that the families of the casualties need in connection to the accident.

Other assistance on top of the hospital bills has to get the approval of the top management, Labastilla said.

She explained that they need proper coordination with the top management who would normally require complete documentation and reports for the additional assistance that might be needed.