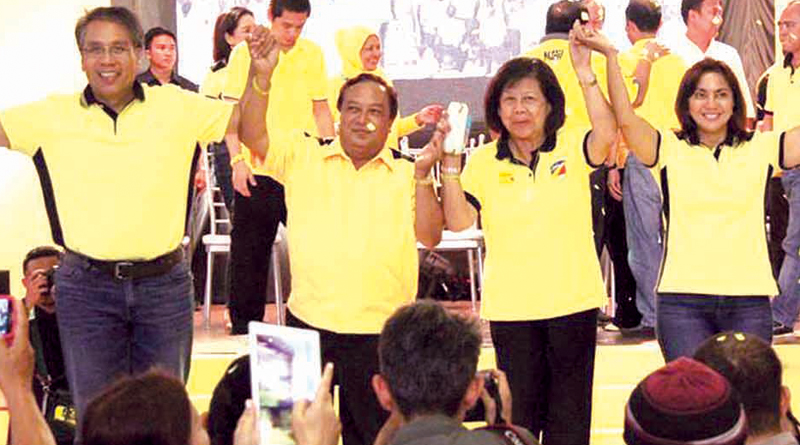 The Liberal Party in Bohol further heightens its momentum in three-district jumpstart campaign rallies in Anda and vote-richer Tubigon and Talibon today.

LP provincial standard bearer Gov. Edgar Chatto, Vice Gov. Concepcion Lim and other stalwarts lead the opening salvos this Easter Sunday to kick off the local campaign in the three districts of the province.

The LP-led administration coalition will intensify its campaign based on good governance, competence, accomplishments and performances, track record and sustainability of social services anchored on Daang Matuwid.

Provincial Administrator Alfonso Damalerio II, who is the general campaign manager of the LP-Padayon Bol-anon Team, assured the Boholanos that it is going to be a major victory for candidates in both national and local slates.

During initial consultative meetings in the towns, Chatto and Lim vowed to swing the momentum up as the Boholanos feel the great need for the continuity of tested programs and services as well as sustainable development.

While Chatto has maintained his high lead in surveys, government and private stakeholders believe in the Daang Matuwid tandem to propel Bohol to greater heights.

Boholanos are more convinced of the Chatto-Lim leadership to continue the provinceâ€™s big gains in promoting tourism, investments, agriculture, health care, infrastructure, education, and provision of social benefits, among others.

In specific, Bohol under Chatto has accomplished such best practices and initiatives on health as the wider Philhealth thru the Point of Care, hospital modernization program, patient subsidy, and more and bigger surgical-medical missions.

Education has been enhanced thru Dynamic Learning Program (DLP), intensified bayanihan school building program, Bohol Educational Subsidy apart from the Pres. CPG Scholarship Program, Boholâ€™s national model senior high schools in tourism and agriculture, and Expanded Special Program for the Employment of Students (E-SPES) under the E-SPES Law or Republic Act 9547 which Chatto himself principally authored when he was then congressman.

Programs and advocacies for agriculture, food security and livelihood have been strengthened thru the Food Always In The Home (FAITH), Herbal Organic Plants Enhancement (HOPE), Chicken Always Ready In The Yard (CHARITY) and Bohol Native Chicken Development, Â as well as the dairy industry development and stronger Barangay Livestock Aide (BALA) Program.

All these have been seriously pursued while the province launched its aggressive tourism recovery program in the aftermath of the epic earthquake that broke the bones of the island.

Recently, the governor created by executive order the Joint Task Force Dagon for a more integrated, responsive approach to curbing criminalities and maintaining peace and order as well as public safety and security.

Other Chatto legacies include the Tourism Road Convergence Program, which is provided for under another Chatto Law, the National Tourism Act of 2009 o RA 9593,Â  and the KALSADA Program which is based on the successful experience of the province and adopted nationally.

The province has also initiated the Boholympics and HEAT IT Culture and Arts Caravan.

The Coastal Law Enforcement Councils (CLECs) have been reorganized by creating directly responsible clusters in every district.

The Chatto leadership has been cited for helping capacitate, thru disaster preparedness and quick emergency response and management trainings, even the barangays in the face of the global climate change and more threats of natural disasters.